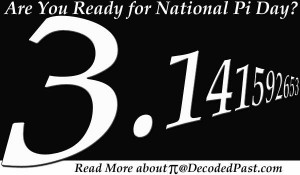 Are you ready for Pi Day? How much do you know about this very famous number? Image by Decoded Past, All Rights Reserved

The Pi Man said “I went around but now I’m at a loss Said Simple Simon to the Pi Man, “Why not cut across?”

The Pi Man did as Simon said, then got a piece of string And when he measured round and ‘cross, he found an awesome thing

When round was fractioned over ‘cross, a number did arise That always seemed to be the same, whate’er the circle’s size

That fraction didn’t vary once, whatever orb he’d try And so the Pi Man now could rest; he’d found a constant — π

The History of Calculating π

A Pi Man once wanted to see What the value of π might be He measured around Then divided by ‘cross And proclaimed “Why the answer’s ’bout three!”

The Pi Man’s method of determining the value of π is probably the one the ancients used. They simply cut a fiber the length of the diameter of a circle and measured how many times they had to lay it out to reach around the outside.

At first, many believed the value was three. Then the mathematicians refined it using fractions down to 3.12, 3.16, 3.15, and finally 3.14; but all of these estimates were empirical.

The Analytical Determination of π

The great Archimedes of Syracuse (287-212 BC) was the first mathematician known to have approximated the value of π by circumscribing and inscribing polygons to find limits. He eventually calculated the value for a polygon of 96 sides to come up with a value of pi between 3-1/7 (3.142857) and 3-10/71 (3.140845). Imagine making such a calculation without any calculating device!

Reciting π to many decimal places became a popular pastime in the early 1970s, and Guinness started keeping track of world records in 1973, at which time the record was under 1,000 digits. The current record holder is Chao Lu of China, who took just over 24 hours to recite 67,890 decimal places of π. Don’t ask why.

Who Has a Birthday on Pi Day?

There was a young lady from Bright Who could travel much faster than light She took off one day, in a relative way And returned on the previous night

Albert Einstein is unarguably the most famous individual born on Pi Day as it is generally defined (March 14). Einstein’s equation (E=mc^2), which describes the equivalence of energy and mass, eclipses in fame even C=πD, which relates the circumference of a circle to its diameter. But there are others besides Einstein who deserve recognition, and those born on the one and only REAL Pi Day deserve special attention.

Pi Man, Pi Man, tell us true, what does you father do? “He wakes this hour to grind some flour And bake a bread for you.”

Georges de La Tour (Mar. 14, 1593 – Jan. 30, 1652) is an original Pi Man. Interestingly, his father was also a pie man — a baker. Georges eschewed the family business and became an artist of considerable repute. His paintings hang in many museums, including New York’s Metropolitan Museum of Art.

Pi Day has only recently blossomed into a day of celebration.  San Francisco in 1988 had the first documented Pi Day revelry, with pie eating contests. In 2009, the U.S. House of Representatives passed a resolution recognizing March 14 as Pi day.

Pi Days in the Future

Since Europeans write their dates with the day first and then the month, it would seem that they miss out on the merrymaking, because April only has 30 days and 31/4 would represent April 31. But the Continentals luck out, because π is often expressed as the fraction 22/7 (This value is actually slightly closer to π than the more-often-used 3.14). So July 22 is the date for Europeans to raise a glass to the most famous mathematical ratio of them all.

Jon Plotkin holds an Master of Science in meteorology from MIT (Massachusetts Institute of Technology) and a Bachelor of Arts in Math from Cornell University. Jon has used his meteorology … Read More about This Expert

University of St. Andrews. Archimedes of Syracuse. Accessed on March 12, 2014