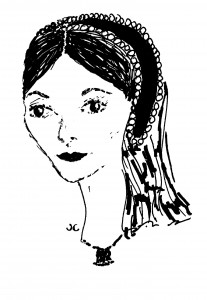 Noble lady of the 16th century. Image by Janet Cameron, all rights reserved.

Marie le Jars de Gournay (1565-1645) is sometimes known as La Dame de Gournay. She was the first of six children born into a noble family in Paris, but sadly, her father died when she was young and her mother moved the family to Gournay.

She was a unique young woman, for while it would be more natural for a noblewoman like her, according to the culture of her time, to sew, or plan a trousseau; she was more interested in studying, and would slip away at every opportunity to resume her reading.

Through her passion, she discovered the essays of the philosopher Michel de Montaigne, and she wrote to him, an act of considerable precociousness at that time. Michel de Montaigne called upon her the following day, and as a result, the two became great friends. He called her his “adopted daughter.”

A Philosopher in Her Own Right

Séverine Auffret is anxious to discourage any notion that Marie le Jars de Gournay was a mere “satellite of a planet,” in her role as translator and friend to Michel de Montaigne. On the contrary, she was not a mere recipient of his largesse, although, undoubtedly, he was her mentor.  Auffret emphasises she was an independent thinker: “Elle ne fut pas l’humble servant de l’oevre d’un maitre.” (She was not the humble beneficiary of the work of a master.)

She worked hard to translate and promote the work of her admired mentor, but it is essential to recognise that her own work did not depend upon his theories. It’s claimed her philosophy is less sceptical than Montaigne’s. Among her best-known works are Equality Between Men and Women, a subject close to her heart; Complaints of Ladies; and Apology for the Writing Women. In the latter title, the word “apology” doesn’t mean an expression of regret for a wrong, but “the reasons for….”

She did not spare herself, but learned Latin through the laborious process of comparing the texts and their translations.

Séverine Auffret describes how the young Marie had the temerity to write to Queen Anne of Austria, presenting her book, Equality Between Men and Women.

Auffret points out that Gournay’s style indicates a life that draws broadly from years of obstinate desire to force the hand of her own destiny. John J. Conley, in his article “Marie le Jars de Gournay,” says “Gournay’s extensive literary corpus touches a wide variety of philosophical issues.” Later, she would become well-known for her own pro-feminist essays.

Views on Vice and Virtue

According to Gournay, personal honour is the first and most important virtue, while calumny is the greatest vice. She roundly attacks political and religious organisations, addresses their defects and is especially critical of the evils of slander. She mentions, in particular, the spiteful behaviour of courtiers.

However, she has no illusions about the nature of virtue, indicated in this rather convoluted statement.

In a work entitled Vicious Virtue, she argues, “One cannot remove from humanity all the virtuous actions it practices because of coercion, self-interest, chance, or accident. Even graver are the external virtues which follow on some vicious inclination…To eliminate all such virtuous acts would place the human race closer to the rank of simple animals than I would dare to say.”

It seems she was very much a realist, and wasn’t fooled by external appearances.

Inequality of the sexes figures largely in her philosophy, says Auffret, with its “…malicious prejudice which has barred women from educational and work opportunities.”  The inequality between men and women, she blames on the politics of the time, and she says it is based on prejudice. It is a misogyny that reduces women to a state of servitude.

Auffret speaks at length of “a beautiful series of [Gournay’s] works now rediscovered , after being unjustly forgotten: poems, Latin translations, essays, pamphlets – in addition to the valuable editing work that is known.” (Author’s translation with a little help from Google Translate.)

The Metaphysics of Poetry

One of the theories closest to Gournay’s heart is her belief in the free rein of neologisms (newly-coined words/phrases not yet accepted into common use) and of metaphor in poetic speech. For her, this freedom to experiment with language has far-reaching metaphysical consequences. She feels that every artisan must be free to work according to his/her own judgement and s/he is entitled to shape it and enrich it, in order to add richness and beauty.

John J. Conley says:  “Not only does metaphor please the senses of the reader; it communicates certain truths about God, nature, and the human soul which cannot be expressed through more concise, abstract rhetoric. Defense of Poetry provides her most extensive analysis of innovation and simile in the poetic expression of truth.”

During her lifetime, Gournay endured many peaks and troughs. When her mother died in 1592, and she arranged the disposal of the family estate, she was over-generous with her siblings, and, as a result, lived in reduced circumstances for some time. The following year, Montaigne died and his widow asked her to complete a new edition of his essays. She agreed and stayed with Madame de Montaigne for about fifteen months, then went to Holland.

In Paris, she used what influence she had to obtain a pension from Queen Marguerite of Valois, and was also presented at Henry’s IV’s court. After the King was assassinated in 1610, she faced charges and opposition. After this, says John J. Conley, she was “…fair game for ridicule, attack and practical jokes. Even Richelieu poked fun at her.” Fortunately, her graciousness and good manners helped her to endure, and although  she would never fit in, she savoured her intellectual passions and her independence.

By the latter part of the seventeenth century, Michel de Montaigne’s material had superseded Gournay’s and she fell into obscurity. Fortunately towards the end of the twentieth century, feminists looking for long-forgotten female authors revived her work with the intent on returning to modern women the vital elements of their lost past.

University of Chicago Press. To the Queen, 1 on presenting her with The Equality of Men and Women. Accessed on May 02, 2014