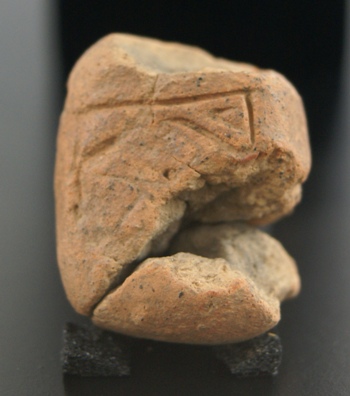 The second Orkney Venus find is a tiny incised and baked clay headless figurine from Westray. Photo by Otter.

The discovery of the tiny Orkney Venus statuette in 2009 revived decades-old debate about whether the religion of prehistoric peoples on Shetland and Orkney Islands north of Scotland traced back to a pan-European religion. Discovery of another two feminine figures since has only added to the discussion.

Champions of the Great Goddess theory believe that prehistoric people worshipped a female, life-giving force. The evidence to substantiate this includes over a thousand stone and bone representations of female images from the Paleolithic period found in caves and habitation sites extending from Europe to Asia.

Some are realistic, some more abstract, and they vary greatly in size.

Cristina Biaggi’s 1994 book, Habitations of the Great Goddess, references Charles Calder’s 1960s-era note that the Shetland Neolithic sites he excavated had similarities in plan with a site interpreted as a temple in Malta.

With this in mind, Biaggi argued that the Orcadian and Shetlandic “temples,” or stone circles, tombs and houses, related to the Great Goddess, highlighting their internal shapes. He believes we can interpret the chambers within tombs — with their circular, figure of eight, or more irregular shapes — as representing wombs.

In her 2006 internet paper, “The Great Goddess and Her Influence Herstorically and in the Present,” Dr. Biaggi asserted that: “According to archaeological, mythological and anthropological evidence, the Great Goddess was probably the principal deity worshipped along the Mediterranean, in Europe, the Near East, much of Russia, North Africa, India and even parts of China during the Upper Paleolithic (30,000-10,000 BCE) and in the Neolithic (roughly 7,000 to 2,500 BPE).”

The Face of Neolithic Religion

Biaggi cites artefactual evidence such as eye-like circles drawn onto pottery or picked into stone in six examples in Orkney and other artefacts in Shetland. Dr Alison Sheridan, head of Early Prehistory in the National Museums Scotland archaeology department, points out anthropomorphic qualities in the Orkney figurine. 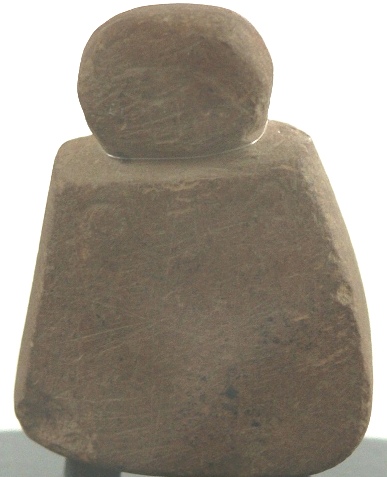 Could the tiny Orkney Venus figurine be related to the prehistoric Great Goddess deity worshiped around the Mediterranean? Photo by Otter.

She cites “striking similarities” between the Orkney Venus’s heavy, wavy eyebrows and dot eyes, and a design on three chalk “drums” found in a youth’s grave at Folkton, Yorkshire. This motif also appears on a lintel in the tomb on the island of Holm of Papa Westray and on a star-shaped piece of flat stone from Skara Brae.

Dr. Sheridan warns it is much less possible to know that these designs are necessarily intended to show human features, but says in “First Thoughts from Experts,” “The other finds of the ‘eyebrow and eye’ motif suggest that it had special meaning to Late Neolithic society, so it may be that this is also a representation of a goddess or ancestor figure.”

Richard Strachan, of Historic Scotland’s cultural resources team, said in a later statement to the BBC: “Initial comparisons do show a similarity in use of this eyebrow motif and may point to the possibility that the markings in the cairn are meant to show human eyebrows and eyes, as the style is very similar to the figurine. Alternatively, we may be seeing the re-use of a motif familiar to the carver and applied to different contexts with different meaning.”

The 5000 year-old Orkney Venus found in August 2009 is tiny, measuring only two inches tall and half an inch thick. The features faded over the centuries, experts say, but they are still possible to see on this earliest carving of a human face found in the UK. This face launched a renewed debate among anthropologists and others, especially since the discovery of a similar, headless clay version nearby in 2010 and the finding of a third, larger stone-carved version in 2012. 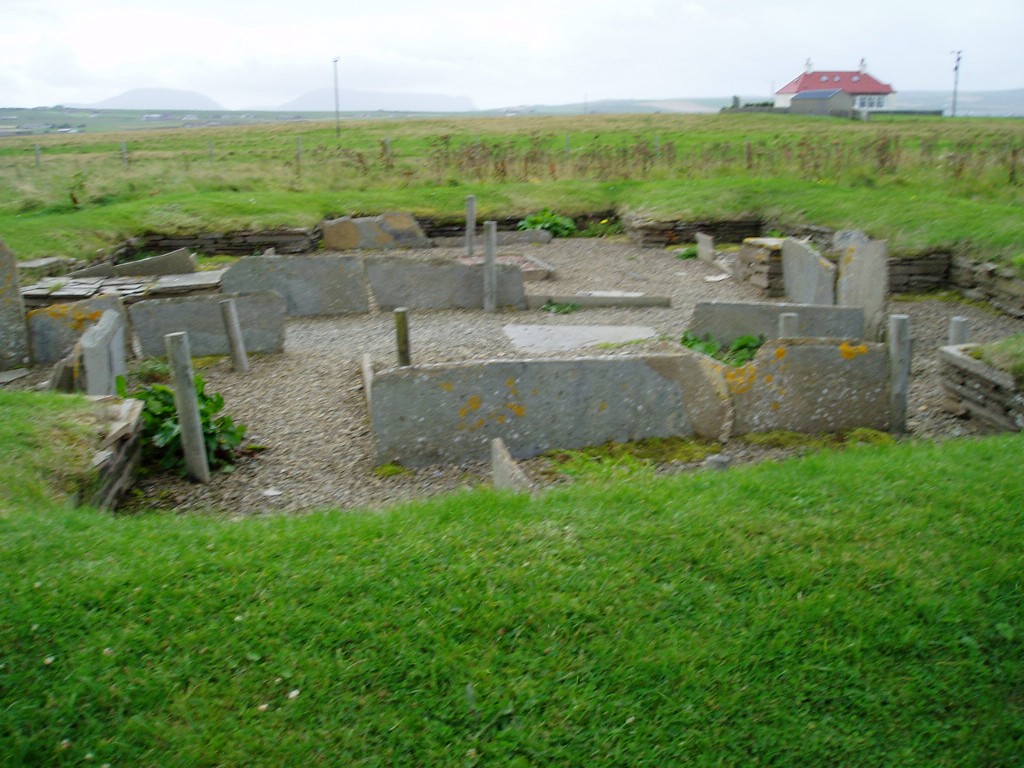 Orkney Barnhouse House Two, had female skeletons in the cist under the triangular stone. All the Ness of Brodgar temples within sight of here were ritually decommissioned. Image copyright Val Williamson, used with permission.

Evidence for a female oriented religion is not lacking on Orkney, even ignoring the womb-like qualities of chambered cairns and tombs that predate the figurines. The third Westray figurine was particularly carefully sealed away in a “secret” interior compartment of a house. Orkney’s earliest buildings had female skeletons buried under the hearths.

Why were the settlements and temples on Orkney, at Westray and the Ness of Brodgar, totally “decommissioned” – filled in with midden and sacrificed cattle carcases – and abandoned? Malta’s temples were also abandoned, the entire island left as deserted as it had been before the great goddess temple builders arrived.

In the 2009 article, “The Re-emergence of the Great Mother Goddess,” Louis Laganà cites Veronica Veen’s 1992 suggestion in “The Goddess Of Malta – The Lady of the Waters and the Earth,” that one probable hypothesis is a “combination of over-population, over-cultivation of the land, erosion by deforestation and a climatic change that can be traced for the whole southern Mediterranean.”

Or possibly the arrival of advancing technologies in copper working followed by cultural change in the Bronze Age encouraged the advance of the phallocentric or male-oriented religious beliefs that were to hold sway within a couple of millennia. A trace of that in Orkney was found in a baked clay anthropomorphised phallus recently, dubbed the “Brodgar Boy.”

This tiny statue continues to inspire debate between anthropologists about the religious leanings of the prehistoric people living on the Shetland and Orkney Islands.

© Copyright 2014 Val Williamson, All rights Reserved. Written For: Decoded Past

Biaggi, Cristina. The Great Goddess and Her Influence Herstorically and in the Present. (2006). Goddess Pages. Accessed on January 31, 2014