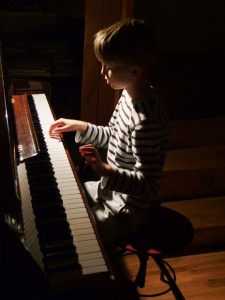 Piano playing can be a very dangerous business. Image by tkoscak.

Noise pollution is everywhere. The jet plane coming in for landing sounds like it’s landing on your rooftop. The teenager next door has loud music and loud, late night parties. The motorcycle gang down the street love to rev their engines at all hours of the day and night. And that’s not all. Now courts may consider a pianist, practicing her piano as softly as possible, a conduit of noise pollution!

Practicing the piano has taken noise as a criminal offence to a whole new level, at least in Spain, where a neighbor recently took a  27-year-old woman to court over alleged psychological damage caused by the piano music, played softer than a spoken conversation. The prosecutors charged the woman and her parents, with whom she lived, with psychological damage and noise pollution, seeking a conviction for all three for over seven years in jail. All for playing the piano!

Has music ever before caused such a stir? Actually, it has. When Igor Stravinsky (1882-1971) debuted his ballet, The Rite of Spring, at the Théâtre des Champs-Élysées in Paris in 1913, people actually rioted. Nothing went to court, but public opinion was rampant with strong negative sentiments.

Governing authorities and laws have often controlled music, using the power of music to promote their cause. Hitler and the Nazi regime is a prime example of music’s subjugation for a political cause. Nazi-approved music had to fit specific standards for inclusion in public performances.

“Good” German music included works by Ludwig van Beethoven (1770-1827), whose powerful German melodies spoke to the German leader as a man who possessed the heroic German spirit. Richard Wagner’s (1818-1883) music was also among Hitler’s favourites. Its serious German sentimentalist paralleled Hitler’s political views. It was also well-known that Wagner had written a violently anti-Semitic booklet in the 1850s, Das Judenthum in der Musik, which suggested that the Jews poisoned public taste in the arts.

The Nazi party used Wagner’s work and his beliefs in the 1930s and 1940s as propaganda tools against the Jews. There were others whose music the Nazis claimed supported the Nazi cause or banned because it threatened the rise of Nazism.

Music has always experienced a rocky road of acceptance or rejection. Personal preferences affect what people are willing to accept without anguish or ;undue psychological damage’ as with the woman in Spain.

The entire country of Spain is known for its exuberant noisiness. People constantly complain about street and bar noise. What is unheard of, however, is complaints about piano practicing, especially complaints of a musician who is a professional concert pianist and not a child beginner banging away on scales and chords.

The complaint came from Sonia Bosom, who claimed that she suffered from the noise pollution of piano practice between 2003 and 2007 when Laia Martin, who lived below her in the northeastern town of Puigcerda, practiced five days a week for eight hours each day. Martin argued that she only played at home on weekends, doing most of her practice in other towns where she had regular music classes.

Years of psychological injury, the prosecution argued, has contributed to multiple medical issues including insomnia, anxiety, panic attacks and gynecological problems.  All this from listening to piano practice.

Martin’s family, accused of allowing  their daughter to play piano music at 10 decibels higher than the 30-decibel limit for musical instruments,  soundproofed their apartment on several occasions, all to no avail. The complaints continued.

And the verdict? The case of the piano-practice pollution has now concluded – the judge acquitted the Laia Martin and her family, citing a lack of proof.

Lebrecht, Norman. Breaking: Pianist will NOT go to jail for noise pollution. (2013). The Arts Journal. Accessed on December 08, 2013