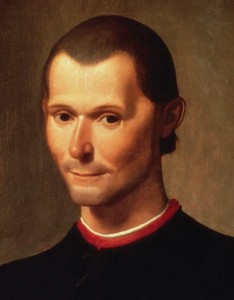 Shown above is Niccolo Machiavelli, painted by Santi di Tito.

“A ruler will perish if he is always good, he must be cunning as a fox and as fierce as a lion,” says political theorist Niccolò Machiavelli in his major work, Il Principle or The Prince.  He adds, “But it is necessary to be able to disguise this character well, and to be a great feigner and dissembler, and men are so simple… that one who deceives will always find those who allow themselves to be deceived.”

Born in Renaissance Florence, political thinker Machiavelli served as a civil servant and diplomat in 1498, an appointment that continued for fourteen years. He lived from 1469-1527. Machiavelli’s pamphlet illustrates the conflict between politics and ethics.

Hostilities with the Medici

Niccolò Machiavelli’s philosophy was empirical, relying on his own personal experience. He developed theories around the manipulative, cheating strategies used in the political arena.

In the hope of placating the powerful family restored to rule the city during the previous year, Machiavelli dedicated The Prince, written in 1513, to Lorenzo de Medici, its head. This was because, formerly, Machiavelli had opposed the Medici and was, subsequently, arrested with their reinstatement.

In his article, “Brief Lives” in Philosophy Now, Graeme Garrard points out that Machiavelli was not one to hold grudges, since he suffered six drops of the strappado at the Medici’s hands, “… in which he was raised high above the ground by his tied arms, dislocating his joints.”

Fortunately for him, the court acquitted Machiavelli.

Machiavelli believed a strong government must hold the people fast through dread of unceasing punishment. He argued that his “prince” would be perfectly justified in employing any method necessary to hang on to power. In fact, this ruthlessness was a ruler’s first duty.

Machiavelli’s thinking was in stark contrast to accepted philosophical thinking at that time, a way of thinking that upheld morals, virtue and ethics. Bertrand Russell, in History of Western Philosophy, quotes from The Prince:

“A man who wishes to make a vocation of being good at all times will come to ruin among so many that are not good. Hence it is necessary for a prince who wishes to maintain his position to learn how not to be good and to use this knowledge or not to use it according to necessity.”

Machiavelli’s view on men in general was equally depressing. “One can say this in general of men: they are ungrateful, disloyal, insincere and deceitful, timid of danger and avid of profit.”

Yet, he was a thinker of his time. Bertrand Russell says that few rulers came to power legitimately. and that even the popes, in many cases, secured election by corrupt means.

Machiavelli also discusses papal powers, and places them in an ethical hierarchy.

In spite of the first item in the hierarchy, the founders of religions, in truth, Machiavelli based none of his ideas on Christian or biblical sources. He believed that power is for those who have the skill to seize it in free competition.

In his book The Blank Slate, Steven Pinker discusses the theory of reciprocal altruism. Reciprocal altruism is the evolutionary concept of co-operation, where one organism may help another at its own cost, with the expectation that the other will behave towards the first in a similar manner. Humans also practise altruism that is entirely unconditional, where there is no expectation of reward.

Reciprocal altruism, in particular, is “just the traditional concept of the social contract restated in biological terms,” says Pinker. The system works on the honour principle, although Pinker admits there will always be cheaters. Those who lack a conscience are known as psychopaths and Machiavelli’s model is one step down from this.

As Pinker explains, social psychologists have documented what they call Machiavellian traits in many individuals who fall short of outright psychopathy.

Bertrand Russell sees the Florentine philosopher rather differently. While admitting it is the custom to be “shocked by Machiavelli,” he also says, that this could be said of many other men if they were equally free from pretence. Machiavelli’s thinking is, says Russell, “scientific and empirical regardless of whether the outcome is good or bad.” Russell describes Machiavelli’s stance as “intellectual honesty about political dishonesty.”

Success, explains Russell, “…means the achievement of your purpose whatever it may be. If there is a science of success, it can be studied just as well in the successes of the wicked as in those of the good indeed better, since the examples of successful sinners are more numerous than those of successful saints.”

When All Options are Repugnant, Choose the Lesser Evil

Graeme Garrard says that politicians, in Machiavelli’s brutal world “…were often forced to choose between two evils, rather than between two goods, or between a good and an evil.”

Nevertheless, Russell concedes that Machiavelli’s political thinking, like that of most of his contemporaries, is shallow.

In his closing paragraph, Russell says, “The world has become more like that of Machiavelli than it was, and the modern man who hopes to refute his philosophy must think more deeply than seemed necessary in the nineteenth century.”  Russell compares Machiavelli’s stance as similar to that of Hitler’s Third Reich.

A Product of His Age or a Monster?

Today people continue to debate whether we are hypocritical to criticise Machiavelli for being a product of his age and a thinker of intellectual honesty. It should also be borne in mind, says Bertrand Russell, that Machiavelli’s treatise, The Prince, “… was designed to please the Medici.”

As it happened, it didn’t please the Medici. Lorenzo de Medici, says Graeme Garrard in  Philosophy Now, “…ungraciously brushed it aside… The pamphlet was eventually published in 1532, five years after Niccolo Machiavelli’s death, as Il Principle (The Prince).”

Afterwards, allegedly, Machiavelli wrote some “amusing sonnets” about his experience of torture at the hands of the Medici.

© Copyright 2013 Janet Cameron, All rights Reserved. Written For: Decoded Past