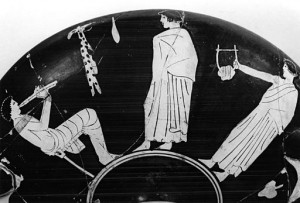 This classic terracotta vessel from 470-460 B.C. shows students intent on their music lesson. If music is important in education, it stands to reason that music appears in the visual arts. This work is in the Walters Art Museum. CC BY-SA 3.0.

Did you know that leading scientists and educators have been seriously studying the importance of music in the education of the whole child for years? In fact, this interest is not current to the last hundred years. Understanding of the need for, and importance of, music in education can be found as far back as Plato (427-347 BC) and Socrates (469-399 BC).

If music is so important in childhood development, why has it experienced such a rocky existence in the public education system?

Since the beginning of the public school system in the 1800s, music has been included in the curriculum intermittently at best. Music has, sadly, suffered from the biases of school board members, lack of available funds, and lack of qualified music teachers, not to mention the bias of the general public, and parents who would rather see their children excel in maths, sciences, and technology, than foster an appreciation of music.

Philosophy of Education in the Past

Educational philosophies, not just in music, but in all areas of education, have been written, discussed, re-written and re-evaluated since the beginnings of inquiry into the need for some form of formal education. While Plato and Socrates theorized on education, including music education, the nobility, the privileged people in society, were enjoying music education and music appreciation.

North America’s approach to a free public education system – education for every child – had its beginnings in the late 1700s, when communities established schools for children whose parents could not afford to pay. The idea of a public school system really developed in the early 1800s.

Massachusetts was the first state to make education compulsory in 1851, following the establishment of the first Board of Education, formed in Massachusetts in 1837. The three “R’s” of education were taught: reading, writing and arithmetic. If the teacher had some music background, the students would also benefit from some music instruction.

The beginning of public education also saw the beginnings of music in the public education system. The controversy that plagued music for the next two centuries began then as well. The bottom line, the question that haunts the honorable goal of music educators everywhere: is it worth the money? Well, when you think of it, the human voice costs nothing and, even out of tune and with no ‘ear for music,’ anyone can sing. So why the controversy? 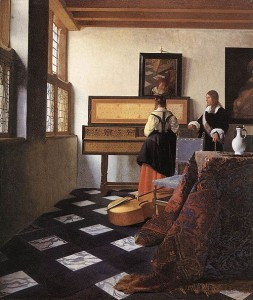 Vermeers’ painting, “The Music Lesson” (1662) from the Royal Collection shows the importance of music in the overall education of the whole child of noble class.

Well-educated minds throughout the centuries have strongly supported the need for music in a well-rounded curriculum, one that educates the whole child. Why? Perhaps in part because they experienced first-hand the benefits of music in their own education.

Unfortunately, once music became a subject within the curriculum, it was subjected to budgeting woes and bickering between those that supported music and those that did not support it.

One might wonder if educational philosophies are going backwards instead of forwards. Bruce D. Taylor suggests as much, writing in Education Week that:

“The consequences could be dire, even propelling us back to a two-tiered education system: just reading, writing, and math for the disadvantaged in under-resourced schools, alongside a richer 21st-century curriculum for the country’s productive employees and future decisionmakers” (“The Skills Connection Between Arts and 21st-Century Learning”).

Taylor, like so many others, insists that “the primary purpose of education is to enable students to make a living as adults,” to become productive citizens of the world. Music educator, Sinichi Suzuki agrees: “music enhances a young person’s development and creates good citizens” (“Nurtured by Love. The Classic Approach to Talent Education”). That is, after all, what education should be about: creating good citizens. And Sarah Robertson, writing for Music Makes Us: Coalition for Music Education, points out that “there is something special that happens inside a person once they learn how music works.”

A photograph from about 1900 shows an African American man giving a piano lesson to a young woman. From the collection of W. E. B. Du Bois. US Library of Congress.

Lili Levinowitz points out in Music Together that the importance of music education has been thoroughly researched throughout the twentieth-century.

“The Pillsbury studies (1937 – 1958),” she writes, in “The Importance of Music in Early Childhood,” “…provided the first glimpse into preschool children’s musical lives and informed us about the nature of their spontaneous music behavior. Characteristic music performances of young children provide a window through which music psychologists and educators can understand the sequence of the child’s developing music skills.”

Patricia Guth goes further to point out in “The Importance of Music Education” that “scientists have also discovered that learning to read music or play a musical instrument develops higher thinking skills. The child who is skilled at music excels at problem-solving, evaluation, and analysis. Music reading uses the same portion of the brain that’s used in mathematical thinking.”

Kenneth Whyte’s research at the Center for Neurobiology of Learning and Memory at the University of California, Irvine in the 1990s concluded in “Why Johnny Can’t Sing,” that “music instruction can improve a child’s spatial reasoning, which is essential to success in math, the sciences and engineering.” Maria B. Spychiger noted similar studies in Switzerland, concluding in “Can Music in School Give Stimulus to Other School Subjects?” that “children learn faster to the sound of music.”

As documented in “Music Education Benefits,” a video by Better.tv, students who study music not only “excel in academics but see emotional benefits as well.”

Richard Colwell has also written in the Encyclopedia of Education that students enrolled in music for four years at the secondary school level  “scored appreciably better than average on SAT and ACT tests” (“Music Education”).

Spychiger, Maria B. Can Music in School Give Stimulus to Other School Subjects? (September 17, 1998). Music Council of Australia.