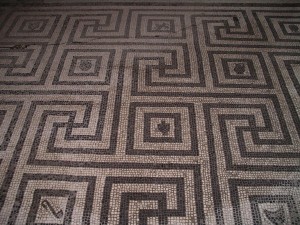 Mosaic floor at Herculaneum was buried when Mount Vesuvius erupted in 79 AD. Copyright image by Frances Spiegel, all rights reserved.

Mosaics are often called ‘eternal pictures.’ Hard-wearing and durable, mosaics survive from ancient cultures providing a valuable insight into life in times past.

‘Mosaic’ is the art of creating pictures and patterns by fixing fragments of precious stones, marble, glass, terracotta, wood, stone, or other suitable materials, into a bed of adhesive.

Some of the earliest mosaics, from Sumerian culture, date from 2500 BC. Early Greeks, Romans and Egyptians made good use of mosaics on walls and pavements – and because of the durability of this art form, many fine examples survive today.

In the 16th century, the Aztecs created colourful mosaic masks and ornaments, while in the 18th and 19th centuries artists such as Giacomo Raffaelli, Luigi Moglia and the firm of Castellani made stylish luxury goods and jewellery with micro-mosaic decoration.

Making Mosaics – How Did They Do It?

One way to make a wall mosaic is to line a wall with a layer of rough cement. A second, finer layer, sits on top. Nails, embedded into these layers, ensure they do not split apart. Once the cement has dried, the artist draws the outlines for the design. A third, thin layer of fine cement is laid on in small sections, and the tesserae, or small mosaic pieces, fixed into it.

The tiny pieces are not laid evenly so that rays of sun or candle light catch the undulating surface creating a flickering effect – floor and wall decorations positively glow.

A small mosaic takes thousands of tiny pieces, each carefully graded according to colour and size. The large floor area of the mosaic from Herculaneum would have taken hundreds of thousands of pieces and a considerable amount of time and manpower to create.

The Standard of Ur comes from the city of Ur in Sumeria (now southern Iraq) and dates from about 2500. Image by Alma E. Guinness

The Standard of Ur from Sumeria, now Southern Iraq

The Standard of Ur comes from the city of Ur in Sumeria (now southern Iraq) and dates from about 2500 BC. This item, discovered in one of the largest graves in the Royal Cemetery takes the form of a box.

When first found, its wooden frame was badly decayed and the panels crushed and broken. In The Horse from Arabia to Royal Ascot, John Curtis and Nigel Tallis tell us the restoration is a guess at how the item originally appeared. Its original function is not known, but historians suggest it is a standard or the sound-box of a musical instrument.

The panels on the front and back are known as ‘War’ and ‘Peace.’ Decorated on all four sides with mosaic scenes made of red limestone, lapis lazuli, and limestone set in bitumen, the scene shown here depicts peacetime. 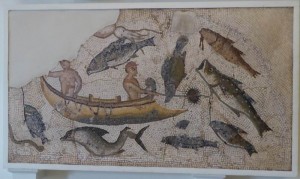 A procession of people attend a banquet, bringing with them fish, animals and other goods. At the top, a larger, more impressive person, shares the banquet with other guests. A singer and a musician with a lyre entertain them. 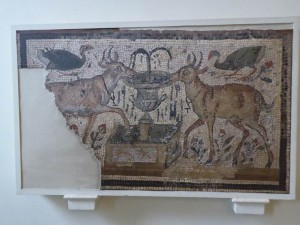 This badly damaged fragment of mosaic pavement, dating from the 4th-5th centuries, comes from Carthage in Tunisia.

Two deer, standing among green plants and red flowers, drink from a circular vase that overflows into a square basin. The animals wear amulets round their necks. Above them are two ducks, one green and one blue, each with red feet and head. The scene has a red and black border. 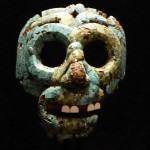 In the 15th and 16th centuries, Aztecs were developing their own unique mosaics including masks and ornaments featuring serpents. These creatures played a major role in Aztec religion.

This mask, representing Tlaloc, god of rain, fertility and water in the Aztec religion, dates from the 15th/16th centuries. Made of cedro wood (Cedrela odorata) with pine resin adhesive, the mask has varying shades of turquoise mosaic. Moulded from a mixture of beeswax and pine resin, the rattles of the serpent tails were originally gilded. 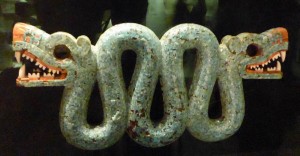 Double-headed Serpent – this may have been a pectoral, or chest ornament worn on ceremonial occasions. Copyright image by Frances Spiegel, all rights reserved.

This double-headed turquoise mosaic serpent was probably worn as a pectoral (chest ornament) on ceremonial occasions. Masterpieces of the British Museum tells us the serpent’s eye sockets were originally inlaid with iron pyrites and shell. Red and white shell adds details to nose and mouth of both serpent heads.

In 19th century Europe we have artists such as Giacomo Raffaelli and Luigi Moglia creating beautiful micro-mosaics on small luxury items. Micro-mosaics require a different technique.

In The Art of Small Things, John Mack tells us the need for greater delicacy led to much finer and tinier tesserae with a colour palette of over 20,000 different tints. 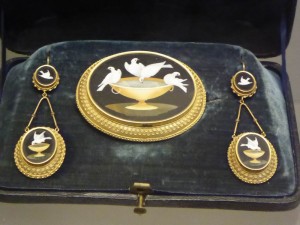 Mack tells us the artist would ‘…lay out the minute strands of the tesserae enamels side by side like upright matchsticks on a slow-drying paste so that only the head would be visible on the finished object. Once done, the whole would be covered in wax and then polished, each step adding to the lustre of the result.’

The Doves of Pliny gold brooch and matching earring set, by Giacomo Raffaelli, is the earliest known example signed by the artist. The original version of this mosaic was found at Hadrian’s villa near Tivoli in 1737and is a 2nd-century-AD copy of a mosaic that Pliny described. The original is 98 x 85 cm. The micro-mosaic is just 5.5 cm in diameter. 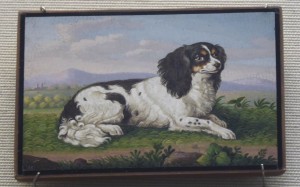 Luigi Moglia’s King Charles Spaniel is another fine example of European micro-mosaic dating from 1830. Mosaics like this, where we see the finest detail of the animal’s fur, are probably the hardest to execute. In The Art of Small Things, John Mack tells us to achieve such reality that Molgia used minute curved tesserae to produce an incredible degree of naturalism. His signature appears in the lower left corner. 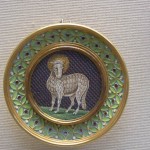 This Lamb of God Brooch was made by Italian firm Castellani. Copyright image by Frances Spiegel, all rights reserved.

In the 1860s, the Italian firm Castellani were also producing fine micro-mosaic luxury items such as the Lamb of God Brooch. Made of gold and enamel, the brooch has a central circular mosaic panel showing the Lamb of Gold standing against a green ground. His gold halo stands out against a background of red, blue and grey.

The border uses the cloisonne technique. The pattern is made up of circles, each enclosing a lozenge. Each lozenge has a small red enamel circle and there are white enamel circles in each spandrel.

Much of the jewellery produced by the Castellani firm resembles early Christian and Byzantine mosaics found in Rome’s churches where mosaics of the Lamb of God were frequent and popular adornments. 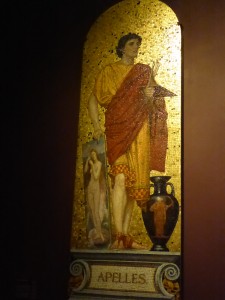 This mosaic representation of Apelles is one of the group of mosaics known as The South Kensington Valhalla. Copyright image by Frances Spiegel, all rights reserved.

In 1865, Henry Cole, first director of the Victoria and Albert Museum, sought to integrate both the decorative arts and the fine arts into the fabric of the new museum building.

Commissioning several promising young artists, Cole ordered a group of large-scale mosaics for the South Court. The group consisted of over thirty mosaics representing important figures in the history of art ranging from the ancient Greek artist Apelles to the 19th-century artist William Mulready.

A magazine of the time, The Builder, nick-named the group the ‘South Kensington Valhalla’ after the palace of the Norse gods. The mosaic shown here is Apelles, designed by Edward Poynter and executed by the firm of Salviati.

The Magic of Mosaics – ‘Eternal Pictures’

By their very nature, mosaics are durable and hard-wearing. Whether they be large-scale pavements and wall-decorations from Roman times, colourful Aztec masks, or luxury micro-mosaic jewellery, they will always fascinate us. The work is delicate and time-consuming, requiring the finest skills and infinite patience. The results are radiant pictures, often reproductions of great works of art, which according to John Mack, many call ‘eternal pictures.’