The Lamb of God Pendant symbolizes great power in Christianity. This pendant is only 1.9 centimetres high  – that’s about .7 inches. Copyright image by Frances Spiegel, all rights reserved.

The British Museum is home to some of the world’s finest microscopic treasures ranging from pre-historic times to the present day. Some of the most beautiful items in the Museum’s vast collection are also some of the smallest.

According to art historian John Mack, writing in The Art of Small Things, economist Ernst Schumacher coined the expression “small is beautiful” in 1973, but our fascination and admiration for miniature and microscopic art works goes back long before 1973.

In The Savage Mind, anthropologist Claude Levi-Strauss said, “all miniatures seem to have an intrinsic aesthetic quality.”

We often describe beautiful miniatures or microscopic works as exquisite, and indeed, it is difficult to imagine the same word used in praise of something like a giant statue or a large-scale work of art.

What is Small? What is Miniature?

When we discuss small works of art, one of the questions frequently arising is how do we define ‘small’ and ‘miniature?’ There is no simple answer. In Aspects of Miniature Painting, its Origins and Development, Danish art historian Torben Colding said, “Mere smallness is a poor criterion; every size is small in relation to a larger one and large in relation to a smaller one.”

Does size matter? Perhaps this depends on our relationship with art. How does any one particular work of art affect us? How do we relate to that work? Obviously, there can never be a definitive answer because we all see art differently.

The Power of Small Things

But what about the power of small things? Just because a work is minute doesn’t mean it lacks power. For example, the tiny Lamb of God is symbolic of the most powerful of all Christian concepts. This Spanish jewel, inscribed “ECCE AGNVs DEI,” dates from about 1600-1650.

Made from gold and white enamel, and decorated with rubies and pearls, the pendant hangs on four gold chains. A central pearl hangs above the lamb which rests on a closed book, representing the judgment of Christ. This was a popular theme with Spanish jewelers in the early 1600s.

This tiny gold jewel has an overall height of 5.5 centimetres. Remove the chains and the pendant alone is just 1.9 centimetres high.

Cast Gold Chariot includes the dwarf-god Bes – this sculpture is a little over 7 inches long. Copyright image by Frances Spiegel, all rights reserved.

One very fine collection housed at the British Museum is the Oxus Treasure, one of the most important surviving collections of Achaemenid Persian gold and silver metalwork.

Consisting of over 150 objects, mostly dating from the fifth and fourth centuries BC, the treasure includes a miniature model of a gold chariot carrying two figures dressed in the style of the Medes of the Achaemenid Empire in Iran.

Originally, the wheels, one of which is now broken, rotated freely, but these are partially glued, thus preventing their movement.

On the front of the chariot, the Egyptian dwarf-god Bes offers protection to the riders. The overall length of the chariot and ponies is 18.5 cm.

The Pitney brooch shows a snake and a four legged-animal in combat. Copyright image by Frances Spiegel, all rights reserved.

The British Museum’s Sutton Hoo and Europe gallery is home to many fine Anglo-Saxon treasures including the Pitney Brooch.

Named after the Somerset Village where it was found, the brooch measures 3.9 cm in diameter, and dates from the second half of the eleventh century.

Cast in bronze and gilded on both sides, the brooch shows a four-legged animal and snake in combat. Delicate beading highlights the main animal.

The snake bites the underside of the unidentifiable animal, which in turn bites itself.

Reflecting both Viking and Anglo-Saxon styles, the openwork brooch shows a high level of skills, indicating that it was a prestigious item most likely owned by a wealthy man or woman. 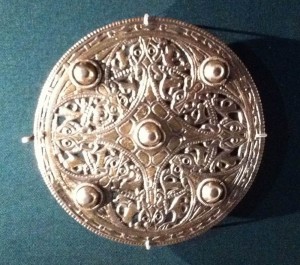 The Strickland Brooch – Another Treasure from Sutton HOO

The Strickland Brooch is another fine Anglo-Saxon piece.

Dating from the ninth-century, the basic material is silver with extensive use of gold to enhance the elaborate brooch.

The focal point is a cruciform design with a boss at the centre. The beaded rim encloses an intricate pattern of lively puppy-like animals with glittering gold bodies and blue glass eyes. The brooch is inlaid with niello, a black metal alloy, that was popular at this time.

The mixture of materials was unusual for a brooch of this date and a wealthy woman probably wore it.

Boxwood Carvings – the World in Miniature

Many of the British Museum’s most interesting treasures are not made of gold, silver, or precious gems, but from densely-grained boxwood.

In the early sixteenth century sculptors in the Northern Netherlands invented a new form of art: microscopic boxwood carvings tell the story of Christianity.

The Boxwood Microsculpture Altarpiece is an intricate look into the life and Passion of Christ. Copyright image by Frances Spiegel, all rights reserved.

Their minute scale and virtuosity made them highly collectible. Only wealthy art patrons, such as the Holy Roman Emperor, Charles V, could afford them. Used for private devotion and enjoyment, these pieces reflect the virtuoso skills of their creators.

The finely detailed altarpiece shown here is one of the best examples to survive. It shows, in minuscule detail, scenes from the life and Passion of Christ.

Doors open to reveal the Crucifixion. The vaulted interior contains intricately carved figures. The inside of the doors show Christ Carrying the Cross on the left, and the Resurrection on the right.

Beneath is the Last Supper. The disciples sit with Jesus behind the table while Judas, who will betray Jesus, sits in front of the table. Surrounding the scene are cherubs and lions holding shields which originally would have identified the patron who commissioned this sculpture. A label dates the piece to 1511. The altarpiece has a leather case to protect it.

Our Fascination with Microscopic Art – Understanding and Appreciating Small Things

It seems that most observers agree with Ernst Schumacher and small is nearly always beautiful. Whether a piece is made from gold, silver, precious gems or wood, the virtuoso skills involved in creating that précis of a larger concept fascinates us.

Microscopic works of art are so full of miniature detail that even with hours of scrutiny we never really understand all we see. We must look more carefully at the world in miniature to gain a greater understanding of the world at large.