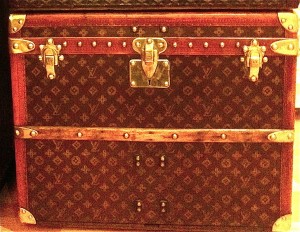 Is it a building or an art object? Actually, it’s both. It’s also a very controversial work that has raised some serious questions about the place of art in society.

Basically, the object is a trunk, a very luxurious trunk, a giant trunk. In fact, it is the size of a building and intended as a building, a building with a functional use. Supermodel Natalia Vodianova came up with the idea to create this building as an exhibition space to raise funds for a children’s charity program.

It’s a noble idea and a catchy one at that. The problem is not just about what it is, really. The problem is that this trunk: this giant trunk, this building, is in the centre of Russia’s Red Square, right opposite Lenin’s mausoleum. It’s a cultural critique of modern-day Russia.

This giant Louis Vuitton-style trunk is reminiscent of the elegance of a long past era. Louis Vuitton, employer of French fashion designers, is one of the world’s leading international fashion houses. Louis Vuitton founded the design house in 1854. The name is well-known for its luxury trunks and leather goods, shoes, watches, jewelry, accessories, sunglasses and even books. It’s definitely high-end merchandise; accessories that one would only find it exclusive shops.

There is a metaphor in the choice of design for this controversial giant trunk building, a.k.a. exhibition space. It’s not just a metaphor in that the trunk represents something that holds personal effects and sometimes treasures. On this scale, the trunk perhaps suggests a keeper of ideas, and that is only where the controversy begins.

The trunk’s design is western, not Russian. That, in itself, makes the image, especially on that grand a scale and in that revered a location, an insult to Russian sensitivities. The trunk reflects affluence and decadence. It advertises, if you will, a sense of western consumerism. It depicts a specific genre, a definite class of people, and a class of life.

Art On A Grand Scale

The idea of a grand scale edifice as metaphor is nothing new. When the Eiffel Tower arose in Paris between 1887 and 1889 with its more than 18,000 pieces of wrought iron held together with more than three million rivets, many considered it an ostentatious eyesore. It was a memorial, in a sense, being erected to mark the centennial celebration of the French Revolution as well as an important symbol and the entrance arch for the Exposition Universelle at the 1989 Paris World’s Fair.

The Eiffel Tower did have a permit, one that allowed it to remain standing in its location for twenty years. In 1909, its ownership was to revert to the City of Paris, permitting dismantling if the City so desired. However, by that time, the importance of the tower, not just as a profitable tourist attraction, made it too valuable an asset to destroy.

Walt Disney saw the financial potential of buildings that represented a specific theme. Others have also cashed in on the profit potential of designing a building shaped to represent a theme or an object. These buildings do nothing but create awe, admiration, a sense of humour and a light-hearted joie de vivre.

Giant art objects in public spaces have always created a stir. Perhaps, due to the metaphor association, that is the statement being made. However, works like Louise Bourgeois’ Maman (1999), a gargantuan bronze spider at 9.27 metres with pure white marble eggs under her belly, continue to stir controversy. Spiders are often seen as metaphors of creativity since they have an innate ability to fabricate complex and calculated webs. And, perhaps, that is the point of art, to fabricate complex and calculated webs: webs of understanding and webs of controversy. Whatever the reaction, the point is that the observer has reacted to the work of art. 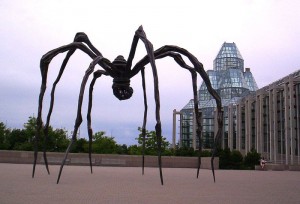 Louise Bourgeois’ Maman (1999) at the National Gallery of Canada in Ottawa, continues to spark controversy. Image by Radagast.

The Trunk In Red Square

It’s difficult to imagine the extent of controversy created over this Louis Vuitton trunk. By Thursday, November 28, 2013, authorities took down the trunk, only constructed early in the week. It had become a bureaucratic headache.

Although the general public and the politicians may not understand its metaphor or its significance, and may brand the work as an image of corruption and incompetence, the intellectual population of Moscow and the art scene argue that this unintended contemporary art installation depicts the “essence of modern Russia,” according to the Art Newspaper.

This work may even earn a nomination for the Kandinsky Prize, Russia’s largest and most prestigious art award.

It’s difficult to believe that this trunk’s construction occurred without a permit in a very public place, a place that sacred to modern Russia’s sensitivities. However, the fact remains, that the trunk was almost complete before authorities ordered its dismantling.

The metaphors this work symbolizes are multiple, it’s statement profound. “If you think about it, the trunk is the best installation in the past year, the timeliest artistic statement about modern-day Russia, a reconsideration and resignification of a sacral space,” wrote Sergei Medvedev, a professor at the Higher School of Economics in Moscow and columnist for the Russian edition of Forbes.

According to The Art Newspaper, the politically vocal curator Marat Guelman, stated that the trunk is rife with post-modern meaning. “Of course there are amusing parallels—LV, Louis Vuitton, Lenin Vladimir,” he said. “And this chance communication adds new meanings to the project.”

Art and Function as a Metaphor

Metaphor? Art of any scale and in any location is ripe with metaphor. The hidden meaning, the suggested meaning, that is what sparks the controversy. The more one understands the possibilities the visual image suggests, the more one wants to argue the work’s merit and justification. In the end, we all believe that we are the experts, that we know what is truly right and best in our society. But, do we?