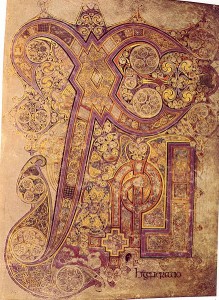 The Chi Rho monogram from the Book of Kells is the most lavish such monogram. Image creator unknown.

The Middle Ages, or the Medieval era, is loosely defined as the period from the 5th to the 15th century. During this period the West saw the rise of monasticism shaped by beliefs originating in Egypt and Syria, and spread through works such as Saint Athanasius’ (c. 297-373 ) Life of Anthony.

Life in the monasteries was tough with an emphasis on the communal and spiritual life. Dedicating themselves to the service of God, monks and lay brothers devoted more than twelve hours per day, as light permitted, to their allotted tasks.

Many were scribes, copying out complete Bibles, Gospel books and Epistolaries containing the writings of the Church Fathers, as well as passages from the scriptures and liturgical texts.

Making a Medieval Manuscript – A Labour of Love

Next time you look at a modern Bible, just imagine writing it out by hand. In medieval times a complete Bible, probably more than 1200 folios, would take the scribe two or even three years to copy. Several copyists might work on the same manuscript using a standardised script and writing with meticulous accuracy. It really was a labour of love.

When the basic text was complete, the next task was rubrication, either performed by the same copyists or by a more experienced scribe. He marked the beginning of new chapters, or the start of new sentences with red ink. The last stage was the illustration or illumination. An illustration is a drawn or painted scene without gold or silver enhancement. Illuminations are scenes decorated with gold or silver leaf.

A scribe prepared his own ink. As far as possible, the inks were easy to make, easy to control, and thick enough to stick to the parchment. More importantly, the pigment must last, not just for his lifetime, but for a millennium.

In medieval times two main inks were in common use. Carbon ink occurs in all medieval manuscripts until the twelfth century, but most later manuscripts used iron gall ink.

According to Pliny, writing in the first century AD in his Naturalis historia, the main ingredients needed to make carbon ink are charcoal or lamp-black thickened with gum from the resin of stone-fruit trees grown north of the Alps. One recipe for brown ink includes blackthorn bark cut in April or May. The scribe would peel the dried bark, crush it, soak it in water and then boil it down. One of the disadvantages of carbon ink is that it is gritty and easily rubs off the parchment.

Iron gall ink, also known as iron gall nut ink, or oak gall ink, comes from “oak apples,” ball-like growths formed by the gall wasp and mainly found on oak trees. The scribe would crush the ball and soak it in rainwater until soft. Wine, beer or vinegar is an alternative to rainwater.

The scribe would add ferrous sulphate (also known as copperas, green vitriol, or salmortis) to the mix and thicken it with gum arabic. Iron gall ink, is acidic and bites into the parchment, making it extremely long-lasting and difficult to erase. If iron gall fades there is always a trace burnt into the page which can still be seen. In poor storage conditions, or humid conditions, the ink can react aggressively destroying the parchment and making small holes in it.

The rubricator’s ink picked out headings, sub-headings, titles and initial letters. Red ink also marks important days in the calendar, hence our expression ″red-letter day.″ The most common recipe for red ink involved mercuric sulphide, egg white and gum arabic. It was sometimes made from brazilwood chips soaked in vinegar and mixed with gum arabic.

Other colours, such as green or blue, were difficult to produce and rarely seen in medieval manuscripts.

One of the hardest colours to make was pure white. Verdigris, i.e. copper oxide or white lead were popular alternatives. A recipe quoted in The Most Beautiful Bibles (p. 16) says:

″Take lead, shape it into sheets, hang it over vinegar, collect the bloom and wash it until it is clean, then you will get white lead.″

If you were writing a really important passage you might use pure liquid gold ink. Fragments of gold leaf were ground up and mixed with nitrates, Oxgall (gall obtained from cows) and copper bloom. The gold ink was applied with a quill and burnished till it shone. One alternative to pure gold ink is known as orpiment, a sulphur-yellow pigment created with yellow arsenic tri-sulphide.

As you can imagine, making coloured inks was neither easy nor safe. Umberto Eco’s story, The Name of the Rose, in which a manuscript is deliberately contaminated with a secret poison, is not too far from the truth. Anyone involved in making ink for the scriptorium often suffered the effects of these substances, especially if they licked their fingers.

When it came to making paints to colour the illustrations, the recipes were just as interesting. Each artist made his own paints, and recipes differed so that reproducing an exact colour was always difficult. The pigments, extracted from animals, insects, plants and crushed minerals such as malachite, orpiment or cinnabar, were mixed with common binding agents, such as honey; oils (linseed, walnut, poppy-seed); egg (puriﬁed yolk; and beaten egg white, called glair); beeswax; gum Arabic; and lime-wash, milk or hide glue.

From the 13th century natural, safer ingredients replaced corrosive pigments such as orpiment and verdigris. Indigo provided blue, the madder plant gave rose, brazilwood made a brownish red, and saffron produced yellow. A range of blues, purples and violet came from turnsole plants. One of the most expensive colours was ultramarine, made from lapis lazuli. Only one other colour surpassed the cost of ultramarine, and that was liquid gold, mentioned above, also known as shell gold or gold ink.

Thanks to the labours of medieval scribes, we now enjoy a wonderful legacy of beautifully written and wonderfully illustrated medieval manuscripts. Many of these incredible volumes are almost as fresh and bright now as they were then. A passage quoted in The Most Beautiful Bibles (p. 6) comes from an 8th century Visigothic dictionary:

″Oh, you lucky reader, before you touch a book wash your hands, turn the pages carefully and keep your fingers well away from the letters! For someone unable to write cannot imagine what an immense labour it is.

Oh, how hard is writing: it blurs the eyes, squeezes the kidneys and tortures every limb.

Only three fingers write, but the whole body suffers…″