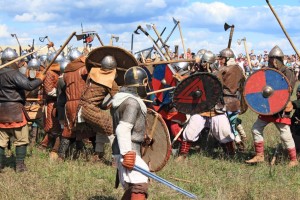 This picture shows a re-enactment of a mediaeval battle. Image courtesy of Pavel Kirichenko.

There were several attempts during the mediaeval period to control war within Christian Europe. These began with Adomnan’s Law of Innocents, moved through the Truce of God, and finished with some decisions by Lateran Councils in the twelfth and  thirteenth centuries.

Born in the gentle halls of Iona and nurtured by prayer and meditation, there came a vision allied to hope and determination. Abbot Adomnan was horrified at the ferocity that beset his native Ireland, where tribal battles in which men and women took part were the norm.

There is a tale that an angel asked Adomnan to enact a law protecting women from war. Whatever the truth of this, he envisaged an Ireland where innocents received protection from violence and participation in it. Thus in 697, Iona’s centenary year, he set off, driven by his vision, to meet the kings of Erin assembled at the synod of Birr in County Offaly to establish the Cain Adomnan, the Law of Innocents, the key points of which are given by Aneurin. The Irish king of Dalriada in Scotland was also a signatory to the pact.

The Provisions of the Law of Innocents

There is a wide range of provisions for the protection of women, children and clerical students in this mediaeval law. While Adomnan could not end the perpetual state of war between Irish tribes, he tried to limit the range of people who participated in it. Thus future fighting excluded women from battle, as well as children and clerical students.

The protection of women went further. There were laws against rape. There was also a law stating that if a woman committed murder, authorities sent her out to sea in a boat with some food and drink and left to the judgment and mercy of God, rather than slaying the woman in an execution.

Fines backed all of these laws and judges appointed in each kingdom enforced them. The fines were denominated in cumals, the basic Irish unit of currency, which was the value of a female slave or a few acres of land, and they were payable to the community of Adomnan, though he took no fines for himself and used the money for charity.

The Peace of God 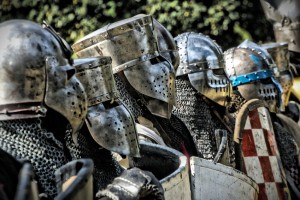 This is not exactly a Christian monk’s dream lifestyle. Image courtesy of Ritter Gruppe.

The mediaeval church, according to the Catholic Encyclopaedia, also made efforts to limit war. The Catholic vision was of a Europe restored to peace and unity under a single regime, as originally intended for the Holy Roman Empire.

Thus the Church imagined a single empire under a powerful monarch in alliance with the Pope. This would guarantee peace inside Europe and strong defence of boundaries against outsiders, such as Vikings and Jehadis. This vision floundered on the simple fact that kings made war… and worse, private wars that are endemic in feudal societies beset Europe.

The church’s response was to establish the Peace of God. In the eleventh century, certain persons received exemptions from war. The Peace of God declared that clerics, monks, virgins and consecrated widows living in convents were exempt from military interference.

Later on, according to Philip Hughes in History of the Church, protégés of the Church received protection. These include the poor, pilgrims, crusaders and merchants on a journey. The Lateran councils, regarded by the Catholic Church as ecumenical, though not by the Orthodox Church, protected all who worked for food production, and it forbade the carrying off of peasant women captured in warfare.

Special religious days, such as great Christian feasts and festivals of Mary, were included in the peace, and religious sites were also protected. Note that in Henry the Fifth Shakespeare shows King Henry abiding by the law when he executed a former crony for robbing a church, Shakespeare’s way of showing that King Henry was a dutiful Christian who kept the law.

Hughes goes on to tell us that the Lateran Councils (1123, 1139, 1179 and 1205,) were to attempt to ban the use of the bow and catapult in wars between Christians, the first attempt at a disarmament project. This strategy was a complete failure, as no one was going to give up such useful weapons, especially not the English, who relied on longbow men.

The councils also banned tournaments. This is not the sport of jousting, dangerous though it is, but small private battles between selected groups of knights, thirty strong, in which participants fought to the death to settle a score. This was a common form of private warfare in the early Middle Ages.

The Truce of God

The Truce was narrower than the peace. It consisted on what were originally local rules agreed to suspend hostilities on religiously significant days. Originally, the Council 0f Elne managed to ban hostilities from Saturday night to Monday morning, but this rule applied only in Flanders, though the Truce of God was to steadily spread throughout France, Germany and Flanders, and in 1063 the regulations extended to all Christian holy days.

By 1089, southern Italy enacted the Truce of God. In 1082, the Truce extended throughout the Holy Roman Empire, though this provision did not apply to England, which was outside the empire, and whose king was powerful enough to enforce peace; nor did it apply to Scotland, which was not only outside the empire, but whose feuding clans were effectively outside royal control. In 1179 the Third Council of the Lateran applied the Truce of God to the whole church.

What Happened to the Truce of God?

The Truce of God is still on the church statute books; it never repealed by any state. The same goes for the Peace of God. However, as states became stronger, the king’s peace became more politically significant and the Truce and Peace of God ceased to serve as major factors in political life.

The legacy of these attempts to moderate warfare is cultural. The Truce and Peace established in the European mind the ideas that war should be controlled and minimized and that private wars were unacceptable. The Geneva convention is the direct descendant of the Peace of God, and may be its lasting legacy.

In an age when fundamentalism ravages parts of the world, remember and celebrate the quiet clerics who worked unceasingly for peace. Those who still claim that religion causes all wars would do well to remember the efforts of the peace-loving clerics who formulated the Peace and Truce of God.