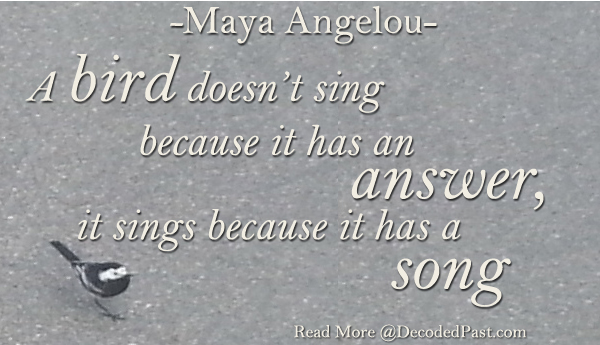 Maya Angelou uses irony and laughter to escape those who tried to oppress her while paying homage to her beloved grandmother. Photo by Janet Cameron, All Rights Reserved.

Maya Angelou has achieved success in many fields besides that of poetry. She is an educator, a historian, a best-selling author, an actor, a playwright, a civil-rights activist, a film producer and a director.

In 1981, Maya Angelou received an appointment as a professor of American Studies at Wake Forest University.

She earned further distinction with an invitation to recite original work at the Presidential Inauguration in January 1993; she was only the second American poet honoured in this manner in the history of the United States.

Angelou was born Marguerite Johnson in 1928 and spent most of her youth either in Arkansas or in San Francisco. Her multi-faceted career springs from a childhood that was an endless search for acceptance and self-esteem. Society forced upon her a deep inferiority about her blackness and so-called “ugliness.”

Themes of Religion and Motherhood

Angelou based her poem Our Grandmothers on her autobiography, and it embodies the essence of Angelou’s first volume of autobiography, I Know Why the Caged Bird Sings; the caged bird being symbolic of the chained slave. The poet uses irony and laughter to distance herself from her detractors and oppressors. The poem is an elegy to the grandmother she adored and all grandmothers of the distant past whose experiences she cherishes and records for future generations.

She names noteworthy black women, including Sojourner Truth (1797-1883), a former slave from Massachusetts who became one of the earliest activists in women’s rights, advocating equality and justice for all.

Three more volumes followed this first volume. Themes of religion and motherhood are strong throughout Our Grandmothers. There are references to the vulnerability and innocence of children, for example “No angel stretched protective wings / above the heads of her children…” and “[T]he killing floor of innocents.”

The Colour of Beauty

To be white was not merely regarded as normal, but also as the only kind of beauty. It is Angelou’s anger at this injustice that inspired her autobiography. She took the title from a poem by one of Angelou’s favourite black poets, Paul Laurence Dunbar, which includes these lines: “I know why the caged bird beats its wings / Till its blood is red on the cruel bars.”

The choice of this poem is particularly poignant given that the young Maya was brutally raped by her mother’s boyfriend, and his death at the hands of her uncle left her with a sense of guilt that drove her into muteness. Eventually, she emerged from this silence.

I Shall Not Be Moved

After many trials, she strove for others to hear her message. Her project was more rooted, more practical and more courageous than a mere cry for freedom. On the contrary, it was about action and steadfastness and a growing belief in her personal power and beauty.

The repetition of the line: “I shall not be moved” strengthens the theme of the poem through every negative experience and carries echoes of black oppression throughout the ages as well as a determination to triumph over adversity.

There is no room for sentiment or compromise, not even toward her babies, who ask: “Momma, is Master going to sell you / from us tomorrow?” The poet must reply, “Yes. / Unless you keep walking more / and talking less.” Finally she invites them to join her in her declaration of independence. “Unless you match my heart and words / saying with me / I shall not be moved.”

The fact that the adult American Negro female emerges a formidable character is often met with amazement, distaste and even belligerence. “It is seldom accepted as an inevitable outcome of the struggle won by survivors,” says Angelou in I Know Why the Caged Bird Sings.

The Naming of Slaves

There is a moment in the first volume of the autobiography that creates a watershed in the young black girl’s life and demonstrates her refusal to relinquish her power. A white woman, Viola Cullinan employs Maya in her kitchen and decides her name, Marguerite, is too long and shortens it to “Mary.”

Predictably, Angelou rebels at this and pays back her employer by deliberately breaking a valuable dish. We need to understand the violence of her passion in context by considering the long history of cruel names used to describe black people.

A Need for Distance

There is, in Angelou’s writing, a constant irony. The use of irony may serve several purposes, apart from the obvious one of softening and deflecting hostility from the telling of unsavoury truths. An important benefit might be enabling the poet to remain psychologically balanced herself by the release of laughter, and simultaneously, keeping her oppressors at a distance.

In her essay, “Transcendence: The Poetry of Maya Angelou,” Priscilla R. Ramsey acknowledges the use Angelou makes of humour. “Angelou’s persona assumes an ironic distance toward the world… She steps back into this distance and can laugh at its characteristics no matter how… devastating.”

A Voyage of Self-Realisation

Priscilla R. Ramsey also comments on the erratic nature of Angelou’s voyage of self-realisation and the great variety of her encounters, which she (Ramsey) sees as metaphors for private experience. Angelou’s creative imagination permits her to transcend despair.

Ramsey explains, “Maya Angelou’s autobiography presents a dislocated self-image, one which becomes new and assertive as she transcends the singular self through a wide and compassionate direct assertion of her statements against political injustice… [S]he has filled that voyage with fantasy, song, hope and the redefinition of her worlds (sic) view through art.”

There is no doubt that Maya Angelou is a transcendental poet in every sense, in her ability to move from the specific to the universal, in her triumph over despair and self-negation, in her glorification of the imagination and in her deep sense of spiritual and religious conviction.

“The Divine upon my right / impels me to pull forever / at the latch on Freedom’s gate.”

State University of New York. Maya Angelou. Accessed on May 16, 2014