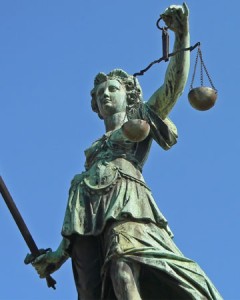 ~”It is justice, not charity, that is wanting in the world.” ~ Mary Wollstonecroft. Image by Advocathee1

Mary Wollstonecraft (1759-1797) was born in Spitalfields in London. Her father lost his money farming, and young Mary’s life was to undergo a change; she had to become self-sufficient. She received a limited education, but was mostly self-taught, and made her living writing, translating, reading, reviewing and editing.

A Hyena in Petticoats

Mary scandalised the Church, the Monarchy and her contemporaries for her strident resistance to the established social order. Her revolutionary views made her unpopular to the extent that she was described as “a hyena in petticoats” by one male critic, according to Jeremy Harwood, in 100 Great Thinkers. Mary’s primary goal was that women should have access to a proper education and that society should recognise women as equal to men.

She shocked society even more with her uncompromising views in her manifesto, A Vindication of the Rights of Woman,” declaring, “Let women share the rights and she will emulate the virtues of man.”  A brave and outrageous claim for these difficult times.

Mary Wollstonecraft was incensed, not only by the patriarchal society, but also by women who both tolerated and supported it. These women allowed the world to regard them as beautiful, but did not object if men did not treat them as reasoning human beings.

What was necessary, according to Mary Wollstonecraft, was equality in life.

Wollstonecraft made some allowances for these women, in acknowledging that it was impossible to expect women to be virtuous until they had some degree of  equality with men. Their situation in life, which was that of uneducated chattels, reduced them to the level of slaves, and was bound to make them… “cunning, mean and selfish,” she wrote in her manifesto.

Mary is equally scathing towards men: “Men neglect the duties incumbent of men, yet are treated like demigods.”

At the end of the final chapter of the Vindication, she has added some notes, including the following: “I once lived in the neighbourhood of one of these men, a handsome man, and saw with surprise and indignation women, whose appearance and attendance bespoke that rank in which females are supposed to reach superior education, flock to his door.”

In Romantic Writings, Susan Matthews says, “Femininity, according to Wollstonecraft, is characterized by certain mental habits, of which she singles out a female “disregard of order” caused by lack of education.” Wollstonecraft, says Matthews, believes women generalise too much and “rely too much on sheer observations of real life.”

Matthews asserts that not all women writers in Victorian times wanted to be novelists, as such works were regarded as of low status prior to 1800. However, a successful female novelist needed to hone her powers of observation.

Wollstonecraft remained dismissive of such skills.  Conversely, her contemporary, Jane Austen, believed the observation of real life was the greatest strength of her genre and exploited it to the highest degree. 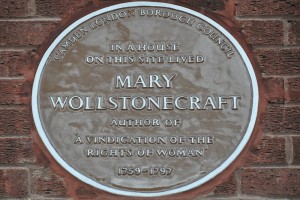 Plaque for Mary Wollstonecroft, outside The Polygon, St. Pancras, London, where she died in 1797. Image by Ellaroth

In her book Of Woman Born, the great American poet, Adrienne Rich, cites the pain with which Wollstonecraft viewed the “passive obedience” and physical weakness she observed in most woman she came into contact with. Wollstonecraft imagined that the few extraordinary women she actually met, who “rushed in eccentrical directions out of the orbit prescribed to their sex,” were actually male spirits in female frames.

Rich is critical of this stance, just as great novelist, Jane Austen, might have been about Wollstonecraft’s attitudes regarding the unimportance of observations. Rich says that fear and hatred affects the brains of brilliant women, who “…are still trying to think from somewhere outside their female bodies – hence they are still merely reproducing old forms of intellection.” (sic)

Wollstonecraft also said, “Women should think as well as feel if they are to break out of their ideological corsets.”  It’s hard not to admire such a fine metaphor, and also easy understand the fury of this exceptional woman. At the same time, we can see why, in such an uncompromisingly patriarchal society, she became an object of disapproval and verbal abuse

In the Vindication, Wollstonecroft insists that there must be more equality in society and that Government should establish day schools, for the education of both boys and girls. From ages five to nine, she says, education should be free.

The Great Irony of Wollstonecraft’s Life

Wollstonecraft’s life was tragically cut short, as she died while giving birth to another great writer of a different persuasion – Mary  Shelley who wrote the novel, Frankenstein. The father of the child was the philosopher and novelist, William Godwin. However, it was not a difficult birth that killed Mary Wollstonecraft, but the general neglect of women in lying-in clinics between the 17th and 19th centuries.

Adrienne Rich in Of Woman Born, explains: “Meanwhile, the potential sources of the disease went unexplored, and women continued to die – not from giving birth but from acute streptococcal infection of the uterus, in no way linked with the birth-process.”  This must be the greatest and most tragic irony of Mary Wollstonecraft’s brief life.

What more might this strong woman have achieved for women and the education of minors, if she had not died, so pitifully, at just 38 years old?

Wollstonecraft, Mary. A Vindication of the Rights of Woman. (1792). Columbia University. Accessed October 7, 2013.