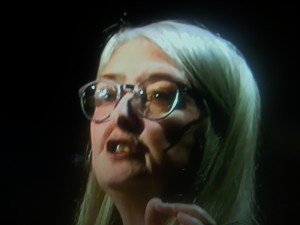 Mary Beard speaks to women about being heard and respected. Image by Janet Cameron, all rights reserved

In her lecture, “Oh Do Shut Up, Dear,” Professor Mary Beard quoted a typical modern-day male technique that silences women in the boardroom. She calls it “The Failed Intervention.”

The woman takes her turn to speak, then waits, expecting a response relevant to her argument. Then a man will intercede, picking up from a previous comment: “What I was saying was…” he begins again, with no reference to what she has just said.

It is as though she does not exist; as though nothing of any consequence has happened during the previous few moments. The men ignore her, dehumanize her- and silence her!

People usually instruct women in this position to disregard the insult and “keep mum.”

“An integral part of growing up as a man is learning to take control of public utterance and to silence the female of the species,” says Mary Beard. This has happened throughout history.

The fact that it still happens today is a matter for serious concern. Professor Mary Beard of Cambridge University, a charismatic and accomplished speaker, delivered her lecture in the British Museum to a captive audience.

The Ancient Art of Silencing Women, from Life and from Literature

There are numerous examples in literature of female characters being routinely silenced. These are just a few, quoted by Beard, in her lecture:

In Homer’s The Odyssey,  written around three thousand years ago, Telemachus tells his mother Penelope: “Go back to your quarters… Speech will be the business of men, all men, and of me most of all, for mine is the power in the household.”

Much later, in the early 4th Century BC, Aristophanes wrote a comedy fantasy about women taking over the running of the state. The men thought it was hilarious, since women were “unable to speak properly in public.”

In Ovid’s Metamorphoses, Zeus turnsone female character, Io, into a cow and she can only “moo.” Zeus’ wife, Hera, punishes another, Echo, by not allowing her control over her own voice. She can only repeat the words of others.

One of the main techniques used to silence women has frequently been that of scorn and derision. Men accused assertive women of those times of being androgynous and freakish; in other words, a female form with a man’s nature. They described female speech as  “yapping” or “barking.”

A  lecturer and guru, Dio Chrysostom from the second century, posited a situation where “an entire community experienced a strange affliction. The men’s voices became female. No one could speak in a manly manner.” The learned “guru” concluded it would be worse than the plague.

The intention to silence is still practised in modern life, although different methods may be used, for example, that of abuse or attack through social media. Recently, the support for a female logo on a banknote evoked outrage and abusive comments on Twitter.

Distressingly, someone who disliked Beard’s politics sent her sick, abusive tweets. When she objected, tweeting that she was “gobsmacked,” one male commentator responded, “‘The misogyny is truly gobsmacking,’ she whined.” The same commentator quoted above runs a “lighthearted” sideline. This is a contest to find “…the most stupid woman to appear on Question Time.”

Through social media, Beard has also been called an “ignorant moron” and she has been threatened with sickening physical violence.

Further, although women who speak in public today are not normally described as “barking” or “yapping,” critics often call them “strident.”

From these few, brief examples we can see how prejudice against women speaking in public is still with us. While Beard  agrees that Western culture cannot entirely place the blame on the Greeks and Romans for our present-day gendered speaking, their culture, rules and conventions remain with us.

“The modern techniques of rhetoric and persuasion formulated in the Renaissance were drawn explicitly from ancient speeches and handbooks,” she says. Authority figures from the nineteenth century were taught in this way, and today we still experience this subversive influence. 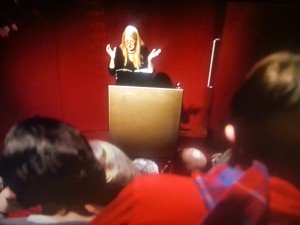 The tradition of gendered speaking goes right back into ancient history, to Aristotle and to Cicero. According to Mary Beard, President Obama uses rhetorical “tricks” taken directly from Cicero.

When Britain elected Margaret Thatcher Prime Minister, advisors considered it necessary to raise her profile – by lowering the pitch of her voice. As it was, it simply was not “authoritative” enough. “And that’s fine, in a way, if it works,” says Mary Beard, “but all tactics of that type tend to leave women still feeling on the outside, impersonators of rhetorical roles that they don’t feel they own.

“Putting it bluntly, having women pretend to be men may be a quick fix, but it doesn’t get to the heart of the problem.”

However, Beard says there is no reason within our culture that we should perceive a male voice as exuding more authority. Nor is there any neurological reason why this should be so.

Why, then, do we accept that the deep timbre of a male voice has a superior and more authoritative quality except that tradition drums this into us, and has become hard-wired into our brains?

The truth is, as Mary Beard explains, that women pay a very high price in order to be heard. She points out that the public regards men with craggy, wrinkled faces as mature and wise, where the same people consider women of a similar age and cragginess as “past their use-by date.”

She concludes her lecture with the following suggestion:

“What we need is some old fashioned consciousness-raising about what we mean by the voice of authority and how we’ve come to construct it. We need to work that out before we figure out how we modern Penelopes might answer back to our own Telemachuses.”