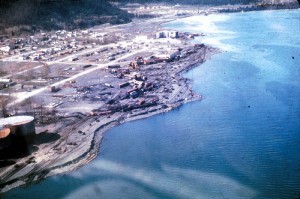 March 27, 2014 marked half a century since the second largest earthquake recorded since 1900 – and the largest to strike in the United States.

This magnitude 9.2 (M9.2) event, which struck in Prince William Sound, caused the earth to shake for around four and a half minutes and generated the second largest tsunami ever recorded.

Thanks to a combination of features (not least the low population density) this quake killed remarkably few people – just 131 deaths, mostly resulting from the tsunami.

The anniversary of this so-called ‘megathrust’ event, which had a magnitude of 9.2, was marked by a flurry of fascinating information about the earthquake, its causes and its effects. But it begs a number of questions about other large earthquakes. The largest on the USGS list is that in Chile in 1960 which reached M9.5; in more recent times Sumatra’s Boxing Day earthquake of 2004 (M9.2) and the 2011 Honshu earthquake (M9.1) have killed thousands and made headlines worldwide – though others (such as an M8.8 off Chile in 2010) have passed largely unnoticed. 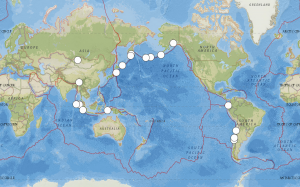 There’s a reason why the USGS large earthquakes list (which, for the record, includes five events of ≥M9.0 and a further 12 of ≥M8.5) goes back only as far as 1900. Although earthquakes have been a part of human consciousness throughout history and theories about their existence and possibly relative size have been around for thousands of years, reliable measures of their physical size are relatively recent.

In a presentation on the history of seismology (based upon Peter Shearer’s Introduction To Seismology) the USGS notes that: “Seismology is a young science, only about 150 years old… Before scientific studies began, ideas about earthquakes were largely based on myth and superstition.”

The first accurate seismographs weren’t developed until the early years of the twentieth century and Charles Richter proposed his scale of magnitude measurement (itself later overhauled) only in 1935.

Judgement of the magnitude of earthquakes prior to the development of the seismometer, then, is sometimes speculative. Where there’s written record, scientists might be able to make estimates on descriptions of the length of shaking or damage to buildings; further back, measurement of ancient dart movements and excavation of ancient – even prehistoric – faults makes a contribution.

But the result is that estimates are just that – estimates. The huge earthquake which struck off the Cascadia subduction zone in 1700, for example, had an approximate magnitude of around M9 – but in the absence of written records scientists, were only able to assign a date by tree ring and radiocarbon dating.

Attempts to assign magnitudes to the well-recorded series of tremors in Missouri’s New Madrid seismic zone in 1821 have resulted in a range of estimates which place the largest of the series between M7.5 and M8.7 – which, given that the magnitude scale is logarithmic, represents a difference of over ten times.

How Should We Judge Historic Earthquakes? 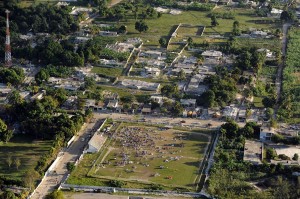 Possibly, then, we should regard the list which shows only five tremors of ≥M9.0 as (if not misleading) then as incomplete, although the chances are that the Earth hasn’t experienced an earthquake very much larger that that M9.5 — rocks just aren’t strong enough to contain the amount of energy a larger event would involve.

Even if we can look at the list and assume that it’s reasonable to expect a certain number of earthquakes of a certain size over a certain period, that still leaves us with other factors to consider.

With earthquakes, size isn’t everything and there’s no close correlation between the list of largest earthquakes and that of the most deadly. Just one earthquake appears on both (Sumatra 2004) and even allowing for the fact that the ‘deadly’ list goes back many centuries, only one of those (Lisbon in 1755) would have made the first list.

The list shows that it isn’t necessarily the size of an earthquake that determines how deviating it is, but where it occurs. Areas with high populations and poor buildings have higher death tolls – a fact clearly demonstrated by the deaths of an estimated 316,000 in Haiti in 2010. This death toll was 16 times larger than that of the Honshu earthquake of the following year – but the magnitude difference means it was just 1/100 the size and released only 1/1000 the energy.

How we see earthquakes, then, should perhaps be determined more by risk of damage than by size. A large earthquake that kills no-one is a fascinating beast for seismologists to study, but a smaller one in a vulnerable region is a human disaster. Magnitude is not the only measure of the size of an earthquake – and history tells us that it shouldn’t be so.

United States Geological Survey. Largest Earthquakes in the World Since 1900. Accessed on March 28, 2014