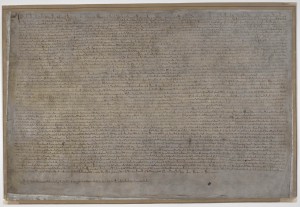 The year 2015 marks the 800th anniversary of Magna Carta, one of the world’s most well-known documents and a universal symbol of freedom.

Magna Carta, Declaration of Independence and US Bill of Rights Together for the First Time in History

In the largest ever exhibition on Magna Carta, the British Library brings together two original copies of the Magna Carta, Thomas Jefferson’s handwritten copy of the Declaration of Independence and the Delaware copy of the United States’ Bill of Rights, as well as later key documents influenced by Magna Carta.

As well as these world-famous documents, the exhibition also features more than two hundred items spanning 800 years of history.

Historical artefacts range from medieval manuscripts, royal remains, works of art and weaponry to 800-year-old garments, satirical prints, and a range of documents and other items showing the users – and abusers – of Magna Carta from its inception through to today’s popular culture.

Julian Harrison and Claire Breay are co-curators of Magna Carta: Law, Liberty, Legacy and the British Library is grateful to Linklaters for their sponsorship of the exhibition.

The Background to the Magna Carta

In 1215, Magna Carta was essentially a peace treaty between King John and the English Barons.

The Barons sought to curb King John’s excessive abuse of power. John entered into several extremely expensive continental battles as he tried to defend the extensive Angevin empire inherited from his brother.

To raise the necessary funds, he imposed extortionate financial demands on the nobility and royal office holders. He exploited his feudal rights, demanding large amounts in taxation. He was not a popular man!

British Library curators Julian Harrison and Claire Breay show how the power of Magna Carta has influenced history right through to the present day.

Writing in Magna Carta Manuscripts and Myths, Claire Breay tells us: ″Magna Carta – the Great Charter – was not intended to be a lasting declaration of legal principles or theory. It was a practical solution to a political crisis.″

Only four original Magna Carta documents from 1215 are known to survive. The British Library has two. Lincoln and Salisbury Cathedrals each has its own copy.

An Interview with Curator Julian Harrison

Decoded Past: What was the political crisis that necessitated Magna Carta?

Julian Harrison: Magna Carta originally arose because in 1215 the Barons felt King John was ruling in a very arbitrary fashion. For example, that justice was being administered unfairly, that people could be imprisoned or even killed without due legal process. They also felt that the King was raising taxation in an unfair manner, to try and reclaim his lost ancestral lands in Normandy and other parts of France.

Also, at the same time, there was a very fraught relationship between the King and the Church. You have to remember that it’s only forty years after Thomas Beckett had been murdered probably at the instigation of Henry II. So all these things came together. Pressure was put on the King to agree to rule in a just and fair manner.

Decoded Past: When King John and the Barons had their great meeting at Runnymede was it the big thing that we imagine it to be, or was it just a small, quiet event?

Julian Harrison: People imagine that several hundred people would have been present. The actual result of Magna Carta was the process of several days, if not weeks, of negotiation. One item on display in the exhibition is known as the Articles of the Barons. This is the Barons’ own manifesto that was presented to King John in early 1215. When the king agreed to that, they drew up the final document, which is what we know as Magna Carta, the Great Charter.

Decoded Past: When King John agreed to the terms of the Magna Carta do you think he had any idea of the legacy he was creating?

Julian Harrison: He would have been absolutely horrified if he’d known what would happen today. One of his first acts after agreeing to Magna Carta was to send messengers to the Pope in Rome demanding that the Pope annul Magna Carta. The Pope actually describes Magna Carta as ″base and shameful″ and he declares it to be null and void of all validity forever. This is literally just ten weeks after Magna Carta itself had first been issued. It was annulled, declared null and void.

Decoded Past: If the original authors could see us today what do you think they’d think of our modern society?

Julian Harrison: They would be quite surprised because, of course, the people who instigated Magna Carta were the elite of medieval society. They were the Barons and the Bishops. There is a clause in Magna Carta which is still valid in English law today which states that no free man shall be arrested or imprisoned save by the lawful judgement of their equals, or by the law of the land.

Actually, what was a free man in 1215 was somebody who didn’t hold their land from anybody else. Effectively, it was just a very small elite. So, what would the Barons think about us today? They would be rather alarmed that democracy had emerged and that people had rights, and that working men had the right to vote, and so forth. There was no such thing as parliament in 1215.

King John’s Teeth are on loan from the Winchester City Museum Collection. Photograph taken by Frances Spiegel with permission of the British Library, all rights reserved.

Decoded Past: Other than the key documents, is there any particular item that you feel links us most directly to King John?

Julian Harrison: Well, the thing which we love more than anything else, I suppose, is the teeth of King John. We actually have the teeth and the thumb bone of the King. They were found in his tomb when it was opened at Worcester Cathedral in 1797. The teeth were removed by William Wood who was a Stationer’s Apprentice. They were actually something which we know for sure were present at the field at Runnymede in 1215.

From Peace Treaty to International Symbol of Freedom

Magna Carta, Law, Liberty, Legacy shows how Magna Carta has evolved from a short-term peace treaty to an international symbol of freedom and rights. Throughout history, people have reinterpreted it and campaigners used it for many different causes. It has become a rallying cry for individuals and groups standing up to arbitrary rulers and tyrannical authority.