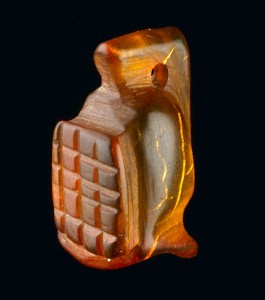 Amber amulet in the shape of a gladiator’s helmet. Amber was an expensive imported material that the Romans thought had magical properties. Image by MOLA/Andy Chopping, used with permission.

It is hard to imagine, but the area now known for its financial institutions and quirky skyscrapers at the heart of London was once a sparsely populated, mysterious expanse of woods and rivers and marshlands.

As the character Marlow in Joseph Conrad’s Heart of Darkness says, when speaking of London: “This also was once one of the dark places of the earth.”

The site that would become Londinium, the principal city of the Roman province of Britannia, was ripe for imperial takeover in the early years of the first millennium.

The Founding of Londinium

It was also a clean slate, with no towns or settlements, or at least none that the Romans would recognise as such. Most importantly it was strategically located, with the river affording easy communication with the rest of the province and the empire beyond.

And so, shortly after the invasion in 43 AD, the Romans founded Londinium at the most easily fordable section of the Thames. The river was much wider and shallower then than it is today, and its tributary the Walbrook, which cut through the centre of the settlement, was a substantial body of water in its own right.

Archaeological evidence for Roman London has emerged in fits and starts over the centuries, thanks to the city’s continual, if haphazard, development, and the vagaries of fire and war. Rescue archaeology, where scholars take the opportunity to study the remains of the past in advance of new construction, was a London phenomenon long before the term came into general use.

The latest frenzy of new building in the City of London has afforded archaeologists unprecedented access to the Roman city. The demolition of Bucklersbury House in 2009 to make room for the construction of Bloomberg’s European headquarters has given rise to the largest and most important archaeological investigation into Roman London yet undertaken.

The Pompeii of the North 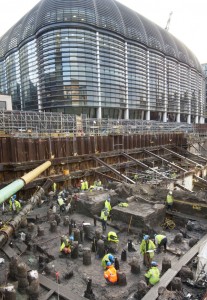 At Bloomberg Place, in the heart of the Roman city, archaeologists have been able to trace the history of Roman London from its rough and ready beginnings to its end.

The site, on the steep bank of the now lost river Walbrook, received the term, “the Pompeii of the North” thanks to the extraordinary preservation of so many artefacts in the waterlogged soil. The conditions were just right to preserve fragile items made of wood, leather and even textiles.

Over a period of six months, archaeologists from the Museum of London Archaeology (MOLA) unearthed over 14,000 finds, including more than 2 tonnes of Roman pottery. It is the largest assemblage ever found within Roman London.

Site director Sadie Watson told Decoded Past, “The sheer number of artefacts means that we will be able to hypothesise about Roman material culture in a way not possible before. The early Roman sequence was well preserved so we have evidence from the very first decades of Roman occupation.”

Bucklersbury House and the Temple of Mithras

The site first came to light after a huge air raid in May 1941, which reduced vast swathes of the city to rubble. However, it was only when it came time to rebuild with the construction of Bucklersbury House in the 1950s, that archaeologists discovered the remains of the Temple of Mithras on the site, along with an extensive collection of religious sculpture.

Public outcry saved the temple, and it was moved to a raised public terrace adjacent to Queen Victoria Street. The move was not without controversy, as parts of the temple went missing and scholars deemed the reassembled structure inaccurate.

Business attitudes to archaeology have changed over the years, and Bloomberg have already begun to build a museum space for the Mithraeum in the foundations of their new headquarters. Archaeologists will reassemble the temple as close as possible to its original site in the depths of the building, which is particularly appropriate as temples of Mithras across the empire were mysterious subterranean structures, accessible only to the initiated.

Thanks to the site being chosen as a new entrance to Bank underground station, the excavation reached a depth of 13 metres below current ground level, with the Roman sequence at a depth of five metres. Archaeologists were able to chart the city’s gradual development, from rough and ready frontier town to industrial hub to refined surburban quarter, complete with mosaics and porticoes. In addition to a previously overlooked section of the Temple of Mithras, they also found a bread oven and the remnants of what had been a massive water-mill.

The Importance of Small Things 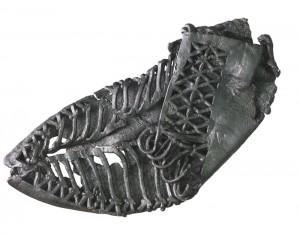 As any good archaeologist will testify, rubbish tips can be gold mines. The dig yielded an astonishing array of finds, the vast majority of them retrieved from the Walbrook channel and the site’s plentiful piles of ancient trash, which announced their presence with a pungent aroma.

One of the star finds is a miniature amber amulet in the shape of a gladiator helmet, evidence for the widespread trading routes of the Roman Empire and beyond. Amber came from the Baltic, and there were major amber workshops around Aquileia in northern Italy.

The site has also revealed the largest quantity of Roman leather ever found in the city, along with 350 fragments of writing tablets. The majority are wax tablets, where the writer scratched text on with a metal stylus, while one has writing in ink on wood, similar to the tablets found at Vindolanda near Hadrian’s Wall. A cache of tablets, complete with styli, was found in a room dating to around 80 AD.

The Discoveries and Our Knowledge of Roman London

Such is the abundance of finds that it will be some years before their study is complete. In the meantime, all we can be sure of is that the discoveries made at Bloomberg Place will revolutionise our knowledge of Roman London.

Symonds, Matthew. London’s Pompeii? The rise and fall of a Roman waterfront. (2013). Current Archaeology. Accessed on May 29, 2014