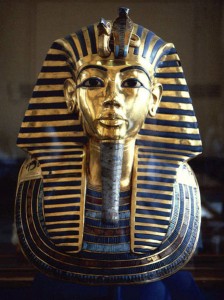 What is “King Tut’s Curse?” Is it real? Image by Jon Bodsworth.

Archaeologists initially opened the Boy King Tutankhamun’s pyramid tomb in November 1922. Lord Carnarvon and Howard Carter spearheaded the project. The media exploited this event by creating tales of this pharaoh’s curse. By December 1922, many reporters were begging for information. They embellished true events and constructed others to enhance interest in what they deemed were paranormal happenings. The media attributed the death of Lord Carnarvon and others to the curse. Hollywood added to the public’s fascination by making movies about mummies and Egyptian curses.

Many legends surround this event – let’s deconstruct them, one by one.

Legend: A cobra killed Howard Carter’s canary the day the tomb was opened.

Truth: The bird lived for a long time after the incident.

Legend: When Lord Carnarvon died in a Cairo hotel, all of the lights in the city went out.

Truth: He died in a hospital and its lights were out for a few minutes – a common occurrence.

Legend: He died due to King Tut’s Curse.

Truth: The cause of death was an infected mosquito bite that caused blood poisoning.

Legend: The men who conducted Tut’s autopsy (Douglas Derry and Alfred Lucas) died within a short time of each other, also due to the curse.

Truth: He died in bed from a cardiac arrest.

Legend: Aubrey Herbert, Carnarvon’s half brother, died five months after Carnavon, also due to the curse.

Truth: Herbert did die five months later, but from peritonitis.

Legend: Archaeologist Arthur Mace fell into a coma and died in the same hotel in which Carnarvon died.

Truth: Mace died in England after he wrote a letter stating he was being poisoned by arsenic.

Legend: A group of twenty people were present at the opening of King Tut’s burial chamber.  Thirteen died within a few years.

Truth: Twenty-six people attended the event. Only six died within the next ten years.

Truth: Ten people watched the unwrapping of the mummy. None of them died in the next decade.

Legend: A writer stated that there was a clay tablet with an inscription that said those who disturbed Tut’s tomb would die. One newspaper reporter proclaimed that a curse, written in hieroglyphs, was at the tomb’s entrance.

Truth: These existed only in their imaginations.

Laboratory studies prove some ancient mummies carry mold, including at least two potentially dangerous species—Aspergillus niger and Aspergillus flavus; both of which can be dangerous. Some tomb walls could be covered with respiratory-damaging bacteria like Pseudomonas and Staphylococcus. Bats also inhabit many tombs. Their guano carries a fungus that can cause an influenza-like respiratory disease. Scientists have detected ammonia gas, formaldehyde, and hydrogen sulfide inside sealed sarcophagi. Under certain conditions, all can be deadly.

Carnarvon’s death, five months after Tut’s Tomb was discovered, fueled reporters’ imaginations and superstition and are, most likely, the roots of the curse. When he died, the coroner ruled that infection caused his death. He suffered from lung disease because he was in a terrible car accident in 1903. When he died on April 5; he had had a high fever, relentless pain, and pneumonia which led to respiratory and heart failure.

Could Carnarvon have died from exposure to Aspergillus? He would have had to go into the tomb to be exposed to mold. Carter wrote in his journal that Carnarvon went into the tomb on November 26, 1922. Hot air escaped after he went broke through the second sealed door. Carnarvon crawled on the tomb’s floor. A reporter for the Times of London wrote that he entered the tomb on February 17, 1923, the day the tomb was, officially, opened, several weeks before he became ill. An entry in Carter’s journal indicates Carnarvon became sick in March, 1923.

Carnarvon was the only one to become sick and/or die soon after its February opening, although there were at least twenty other Westerners attending. Did Carnarvon die from exposure to Aspergillus or from his deteriorating lungs?