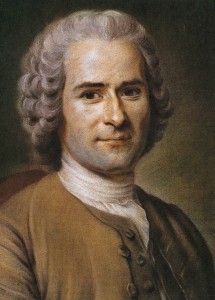 Jean-Jacques Rousseau (1712 1778) believed that man is naturally good and that vice and error are alien to him. This creates a conflict between “nature” and “artifice” in attitudes to society, education and religion.

According to Rousseau, nature is man’s state before being influenced by outside forces. At the same time, he asserts: “If man is left… to his own notions and conduct, he would certainly turn out the most preposterous of human beings. The influence of prejudice, authority… would stifle nature in him and substitute nothing.”

Man needs to work with nature, not against it. Rousseau says, in his treatise, that man is discontented with anything in its natural state and claims that everything degenerates in his hand… “…he mutilates his dogs, his horses and his slaves; he defaces, he confounds.”

The correct balance of these three categories in human nature, enables man to develop naturally.

These three elements should be consistent. Consciousness of sensation enables us to pursue or avoid them according to whether they are pleasing or disagreeable. This may result in enlightenment, “… but subject to the restraint of custom, judgements concerning pain or pleasure are more or less distorted by our opinions.”

Rousseau claims that outside influences, for example, society and custom, are responsible for deviations from natural, healthy development in humans and this creates a dilemma. Education should respect individuality rather than bow to social conventions.

“Instead of educating a man for himself, he must be educated for others… we must chuse (sic) either to form the man or the citizen; for to do both at once is impossible.” Here Rousseau reinforces the value of reason, abhorring distortion and prejudice, asserting how difficult it is for man to be true to his inner nature and also accommodate the demands of society, “…held in suspense… without being able to render ourselves consistent, and without ever being good for anything to ourselves or others.”

Unnatural Nature and the Woman of Sparta

Rousseau says that feeling is a component of faith, sometimes presenting “nature” in a way that is positively unnatural, yet calling it “noble”. The woman of Sparta, having lost her five sons in a battle, cries, “…who asked you of my sons? – But we have gained the victory.”

Rousseau attempts to present an individual as a whole, therefore, as both true citizen and heroic mother, stretching credibility to its limits. This is an unlikely account of a natural, maternal reaction.  She has repressed her natural behaviour – and this is a problem for Rousseau’s attempt to reconcile citizen and man.  A child must first be a man, before choosing a profession: “Nature has destined us to the offices of human life, antecedent to the destination of our parents.”

Rousseau’s preoccupation with reason and enlightenment leads him to similar conclusions to those of the French philosophes. He argues for what he sees as rational liberation, making objections to the ways in which babies are unnaturally swaddled so that they cannot move, or wet-nursed instead of nursed by their natural mothers.

The House in Geneva where Rousseau was born. Image by Bristoleast.

However, he is not averse to encouraging stoical endurance and abhorring indulgence: “…when she makes an idol of the child… prevents every approach of pain or distress… This is the rule of nature.”

Later, he becomes even more extreme in his claims: “Man is born to suffer in every stage of his existence… Happy are we, who in our infancy, know only physical evils… We lament the state of infants, whereas it is our own that is most to be lamented.”

This seems to contradict earlier assertions about not swaddling children, and not keeping them from their mother’s breast, but Rousseau’s point is that the swaddling and wet-nursing are man-made evils, due to the caprices of women. “…such is the man made by our own caprices; that of nature is differently constituted.”

Evils that Spring from Weakness

Rousseau believes the education of man commences at birth and that experience is the forerunner of the precept. The child must be guided in order to facilitate its natural, good tendencies: “Prepare early for his enjoyment of liberty and the exercise of his natural abilities… unrestrained by artificial habits.”

Ideally, the child is left free to develop, but by example. When children begin to observe objects, proper choices should be made.  Therefore, a good influence is exerted that does not interfere with the natural propensity of the child to strive for good. Sometimes, the influence is exerted passively, for example, avoiding allowing weakness in a child by not giving in to them.

Rousseau’s ideas are compatible with religion and the argument from design. He denies that matter organises itself by chance, and that disorder is the work of man

The word “powerful” inspires good, since evil springs from weakness. “Many evils, such as the “apprehensions” and “miseries” engendered by medicine, are manmade and constitute an “outrage” to the laws of nature. Natural evils, like physical pain, have a useful function: pain alerts us to the need for a remedy.” So – nature may be harsh but it is ultimately beneficial.”

Rousseau says that manmade evil is separate from divine providence. “Enquire no longer, man is the author of evil; behold him in yourself. There exists no other evil in nature than what you either do or suffer… in the system of nature I see an established order which is never disturbed.”

There is a free choice to be made here, according to Rousseau; man may do good or evil.

Natural religion, Rousseau, feels, has been tampered with and worship made too ceremonial. “Religion should be studied in the lives of men and in the book of nature.” He disapproved of, and found suspect, revealed religion.

Rousseau’s concept of the word “nature” is that man is naturally good if exposed only to good influence and his goodness is adversely affected only by external forces. There are contradictions in Rousseau’s attempts to reconcile nature with society. While many of his arguments are sound, where he is guided by compassion, this compassion actually fails him because strong traditions influence him.

“Man by nature is formed to suffer with patience.” This is the traditional, stoical fortitude of Rousseau’s era.

There are other instances where he appears cold-hearted, for example, in analysing his ideal student: “…he must have no disabilities” suggesting an elitism which is lacking in compassion in a piece of writing where compassion is held in high regard.

A further example is the argument that men and women are unequal in many respects.

Rousseau’s ideas were taken up by the leaders of the French Revolution and were instrumental in influencing both Immanuel Kant and Karl Marx. His greatest work was The Social Contract about freeing man from his chains through the creation of an ideal society.