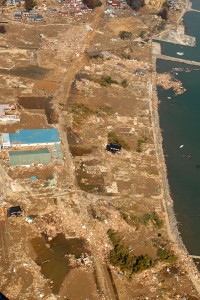 Tsunami damage following the 2011 Japan earthquake. Image courtesy of the US Navy.

March is a bad month for Japan, or so it seems. Three years ago, March 11 saw the largest earthquake in the country’s history and one of the largest ever recorded – but the 2 and 4 of March are also anniversaries of significant tremors of magnitude 8.4 (M8.4) in 1933 and M8.1 in 1952. And yet again this year the earth shook as a smaller, but nevertheless significant, tremor, registered on 2 March 2014.

The truth, of course, is that the Japanese island arc is so earthquake-prone that no month stands out. The USGS list of significant earthquakes from 1891-2011 suggests that September and October are at least as bad as March (although this list includes events according to their significance rather than their size and so is incomplete.)

Nevertheless, the anniversary of these three severe natural disasters, falling so close together, raises the question of Japan’s seismic history.

To say that Japan is vulnerable to earthquakes is an understatement: a quick search of the United States Geological Survey’s earthquake database reveals that since 1900 the Japanese archipelago has suffered 138 seismic events of at least magnitude 7 (≥M7.0) of which 6 were at least M8.0 and one, the greatest of them all in 2011, reached M9.0. By contrast, the San Andreas Fault Zone has experienced just 11 of at least M7.0, none of them larger than M7.7. 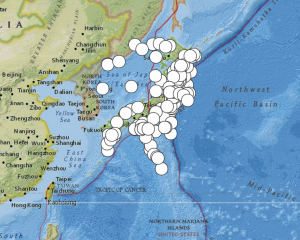 Earthquakes of at least M7.0 in Japan since 1900. Image courtesy of the USGS.

Neither of the two major earthquakes from the days of March claimed lives on anything like the scale of 2011. Nevertheless, the M8.4 of 1933 – the country’s largest until the 2011 earthquake exceeded it – earned the USGS description as “one of the world’s deadliest earthquakes” generating tsunamis of up to 94 feet, which contributed to the death toll of around 3,000 and reached as far as Hawaii.

A tsunami, though a much smaller one at a maximum of ten feet, also resulted from the M8.2 of 1952. In this case the death toll was much lower, at just 31, although it also caused extensive damage.

Why So Many Large Earthquakes?

Japan is the product of the movement of the Earth’s tectonic plates – enormous slabs of crust which move around the planet’s surface at speeds of a few centimetres per year. When the plates move together, enormous stresses build up, released as earthquakes.

Where stresses force one plate beneath another, as in the case of Japan, the interface between the two plates, where stress develops and extends for thousands of kilometres both along the surface (appearing as a deep ocean trench) but also for hundreds of kilometres into the crust.

Such subduction zones generate the largest earthquakes – so-called ‘megathrust’ quakes; and one of those major zones extends along the Japan Trench, which lies off the northeast coast of Japan. As the map shows, most of the country’s large earthquakes are associated with this boundary.

The offshore location of many of these tremors, in combination with other factors such as magnitude and the nature of faulting, means that they are likely to cause tsunamis – and indeed, tsunamis cause many of the recorded deaths rather than earthquakes. 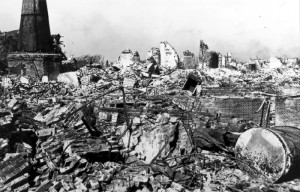 Remains of Yokohama’s Grand Hotel after the 1923 earthquake. Image courtesy of the USGS Photo Library.

Although the earthquake of March 2011 was the largest which the country experienced, the ‘Great Kanto earthquake’ of 1923 eclipsed the 2011 death toll of around 20,000.

Although an order of magnitude smaller, the tremor caused massive devastation in Tokyo and Yokohama, with collapsed buildings and associated firestorms. Estimates vary, but the death toll could be as high as 150,000 for this quake.

So will it happen again? The answer, in so far as its possible to answer unequivocally about earthquakes, is yes. Japan experiences thousands of earthquakes each year and as long as that tectonic boundary remains active – which it will for millions of years to come – large earthquakes will occur. But human responses and earthquake engineering may go some way towards reducing future deaths and damage as a result.