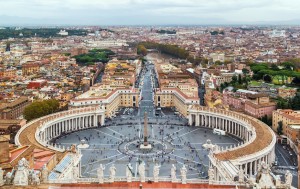 St Peter’s Cathedral in Rome serves as the centre of the Catholic Church. Image courtesy of borisb17.

In Inventing the Individual, Larry Siedentopp has produced a masterly work of intellectual history that establishes the roots of liberalism and secularism- not in a rejection of Christianity, but in the works of Paul and Augustine and the long Catholic struggle to establish a just social order in Europe. Siedentopp shows how Christianity introduced respect for the individual into European thinking.

Siedentopp begins with his observation that some liberals believe that their views are a recreation of the ancient concept of liberty, a view which he demolishes.

Drawing on Fustel de Coulanges’ seminal work on the ancient city, he establishes that the liberty of the ancient urbs/civitas was the status/liberty of certain established elite families, and in making this point, he observes that many were excluded from liberty in the ancient sense.

Siedentopp extends his criticism to rationality, showing that the ancient Greeks regarded it as the characteristic of high status individuals, and therefore not of barbarians, slaves and women.

He takes his case further by discovering the roots of liberty in the works of Paul and Augustine. He shows that Paul, in his masterful construction of Christian theology, allied the Greek sense that human nature was the foundation upon which ethics were based with an awareness that, “there is neither Jew nor Gentile, Hebrew nor Greek, slave nor free, but all are one in Christ Our Lord.”  (Galatians 3:28.)

In making this radical claim, Paul established the distinctly Christian principle of the equality of souls, upon which any Christian social structure is founded. Siedentopp allies his analysis of Paul with a discussion of how Augustine’s analysis of how to live in this world as a good citizen without ascribing to the world’s values formulated a strong case for the freedom of conscience upon which liberalism is based.

Siedentopp traces the development of Christian social thinking through the church’s struggle to save Roman civilization in the supposed Dark Ages and shows that in large parts of the empire Christian institutions survived.

He demonstrates that the institutional church through the bishops began to show the barbarian warlords a way of governing that transcended tribal identity and sectarianism, and this gave an impetus to the development of legal systems.

Siedentopp does not overlook the difficulties that aristocracy posed for the clergy, with their desire to control the church and its property, but he shows that the church resisted such efforts. He makes the important point that eighteenth century secularist anti-clericalism has produced a distorted view of the role of the church in European history, playing down its immense positive achievements for polemical purposes.

This scholarly work demonstrates the role in the development of legal  thinking played by canon lawyers, those who work in the field of church law. In doing so, Siedentopp explains that while canon lawyers drew upon Roman law they transformed it with the application of the Christian principle of the equality of souls.

One of the book’s strong points is that it draws not only upon well-known canonical lawyers such as Gratian, but also on a range of others. Yet Siedentopp shows how the concept of the equality of souls and the consequent emphasis on the liberty of the individual produced tensions in the church, as the principles that the Catholic Church had expounded increasingly challenged the authoritarian role of the papacy. From this tension the conciliar movement developed, and subsequently the Reformation, though the latter had other roots as well.

Siedentopp makes the point that Christianity should not oppose a secular society, which is one that respects freedom of conscience, as the principles of this kind of society derive from Christian thought.

While I agree with this general principle there is the problem that secularism can be either a kind of pluralism that allows all to live according to conscience – this is the kind that John Stuart Mill proclaimed; but there is an intolerant secularism that seeks to exclude religion from public life and uses the equality laws to enforce its will – this is the kind that lies behind political correctness.

Siedentopp does not recognize the distinction. It is in his prescriptions for a political program, a small and underdeveloped element in the book, in which the book’s one weakness lies.

One of the characteristics by which we know true scholars is that they can express themselves in language that conveys deep knowledge in simple terms, and Siedentopp does this with ease. It is clear that we are reading the works of one who has devoted his life to studying the intellectual history of Europe and has mastered his brief.

There are some books that become so tedious that you do not want to finish them, but there are others that stimulate and interest readers from cover to cover. Inventing the Individual is one of this latter category of works. I enjoyed this book and read it cover to cover, and I am likely to return for another reading of selected areas. This is one work not only read, but retain for reference.

I  commend this book to you.