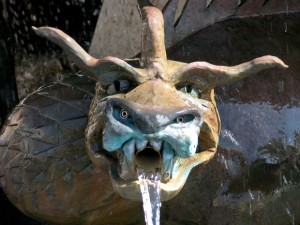 A sea serpent hoax scared residents of Silver Lake – even as it ramped up the town’s tourist appeal. Image by clarita

July 13, 1855: five men and two boys were fishing from a boat on Silver Lake near Perry, New York at night. They watched what appeared to be a floating log, until one of the men said it was moving. It bobbed in and out of the water, then appeared about four feet from the boat’s stern.

The watchers rowed to the shore, then, walked around the lake to their homes. The next night, a group of young men saw the creature. Soon, people descended on Perry to see or hunt for what locals dubbed the Silver Lake Serpent.

An elderly AmerIndian, John John, said the Seneca and Mohawks avoided camping by the lake because they had been frightened by a monster that lived in its waters. People believed the legend, and formed the Vigilance Society to hunt for and capture the serpent. A whaling man even arrived, with his harpoon. Hotels prospered.

The serpent seemed to have intelligence, and ventured into the water at nights, when the weather was inclement and no boats were on the lake – until August 1, 1855 when it appeared at noon. At least six independent witnesses saw it from the shore – there were no boats on the water. Sightings continued, then tapered off in 1856, but people still flocked to Perry.

In 1857, Artemus B. Walker’s Walker House Hotel caught on fire. Firefighters rushed there to put out the flames. When they went into the attic, they saw something strange – a huge greenish serpent made of canvas and coiled wire, and a big pair of bellows to make the “monster” move. The conclusion? Walker and trusted friends built the “serpent” to attract tourists to his establishment.

When firefighters discovered the “creature,” Walker left town because he feared repercussions. He returned eleven years later, however, and discovered the townspeople regarded him as a champion. The village held and, still holds, a sea serpent festival. Walker ran another hotel in Perry until his death.

Cryptozoology is the speculative science that studies Unknown Mysterious Animals, UMAs, or cryptids that mainstream science doesn’t recognize. Zoologist Bernard Heuvelmans coined the term, “cryptozoology,” to create the field as a science and separate it from other paranormal areas. Earlier writers in the field used the terms exotic or romantic zoology and generally included creatures of mythology and folklore. There are three major categories of cryptids – those who have been witnessed, but not killed or captured, animals thought to be extinct, and those found outside their natural habitats.

Unfortunately, the paranormal and cryptozoology realm is full of hoaxes and frauds intended to make money.

The Silver Lake Serpent, although it happened a long time ago, ranks among the greatest hoaxes in the paranormal realm. Imagine Walker’s surprise when he returned to Perry and discovered that the villagers welcomed him.

Coleman, Loren and Jerome Clark. Cryptozoology A to Z. (1999). Fireside.