The Third Imperial Fabergé Easter Egg was a gift from Alexander III Emperor and Autocrat of all the Russias to Empress Marie Feodorovna for Easter 1887, to mark the twentieth anniversary of their engagement.

In the Russian Orthodox Church, Easter is the most important festival, and it is traditional to exchange painted eggs as gifts. Looking for something really special, Alexander commissioned Russian Imperial Court goldsmith Peter Carl Fabergé to create a lavishly decorated, totally unique, and exquisitely beautiful egg – a gift so extraordinary that nothing could possibly surpass it.

The egg delighted the Empress and from then on, Fabergé made a new egg every year. Each took a year to complete, and Fabergé drew on the skills of the hundreds of craftsmen and women in his workshops.

Fabergé expert Kieran McCarthy tells Decoded Past that, ″each one of the eggs is different… the only stipulation was that they were egg-shaped with no repetitions. So they are all different. The later ones become different creatures all together. They are almost sort of monstrances… highly elaborate, very ostentatious, but this one is a simple and delicate piece of gold working.″ 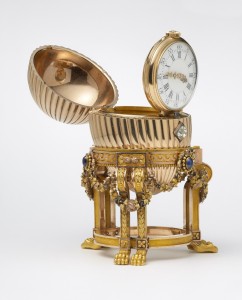 A brilliant cut diamond push piece opens the egg to show a Vacheron Constantin watch. Fabergé hinged the timepiece, with its diamond set hands, to allow it to stand upright.

Kieran McCarthy explained to Decoded Past that, “It’s very simple to look at, it’s a very elegant form. Its simplicity belies how difficult it is to actually produce a piece of gold work of that type, because everything about it is just perfect.”

“One of the ways of looking at it is as though it’s descended from Heaven, untouched by human hands… it’s almost a work of God because it is so perfect… it’s so meticulous… the attention to detail is extraordinary and to make each one of these reeds, taper and meet in exactly the same point at the top and the bottom is an amazing piece of God’s perfection. It is just a tour de force of goldsmithing.”

“It’s all yellow gold but it has a myriad of effects and plays of light across it. When you turn it over you see those flowers which are completely three-dimensional, and there are flowers here in four colours of gold… it’s a three-dimensional jigsaw puzzle of petals of gold interlaced to create these garlands.”

What Happened to the Eggs?

Faberge made fifty Imperial Easter Eggs for Emperors Alexander III and Nicholas II between 1885 and 1916. The Russian imperial family’s collection was on display in St. Petersburg in March 1902 in the Von Dervis Mansion exhibition.

Following the revolution in 1917, the Bolsheviks confiscated works of art originally owned by the imperial family, and sold many of them.

Some ended up in museums and others went to wealthy collectors. Wartskis had sight of the 1889 Necessaire Egg in June 1952, and the 1888 Cherub Egg with Chariot was in the hands of American industrialist Armand Hammer in 1934. Queen Mary purchased the Basket of Flowers Egg and the Colonnade Egg and these are now in the British Royal Collection.

The Third Imperial Easter Egg was among the eight lost eggs, until 2012 when a scrap-metal dealer in a small town in America’s Mid-West spotted a gold egg-shaped object in a bric-à-brac stall, also known as a flea market stall. Buying it for £8,000, he thought he could sell it for its scrap value, but this proved harder than expected.

Fascinated by its beauty, he googled ‘Vacheron Constantin,’ the name on the timepiece, plus the word ‘egg.’ A newspaper article told the owner that in 2011 researchers found the Third Imperial Egg listed in a 1964 Parke-Bernet auction catalogue described as a ‘Gold watch in egg form case.’ The article led him to Kieran McCarthy, director of Wartski, the London-based Royal Warrant holders and experts on Fabergé.

Decoded Past: ″What makes Carl Fabergé’s work so fascinating?″

Kieran McCarthy: ″Well, Fabergé is two things… Fabergé is a product of his time, but it’s a workshop which no longer survives. Fabergé himself is an incredible genius of a craftsman as you can see in this Easter Egg. It’s goldsmithing at its very, very, highest level. It’s meticulous attention to detail… it’s generations of apprenticeships and skills built up over hundreds and hundreds of years, coming to their height at this point. The skills are only half the story, because you have to have the patronage to foster and encourage those skills and in imperial St. Petersburg you had that last gasp of European imperial patronage.”

“The Tsars put no restraints on Fabergé’s work, there was no limitation, they could do whatever they wanted. Therefore, given that freedom and those skills, and given that audience that was encouraging you and pushing you at every moment, it brought out the very best, and it’s the collision of that great craftsmanship with great patronage that allowed Fabergé’s work to take on this magical aura.″ 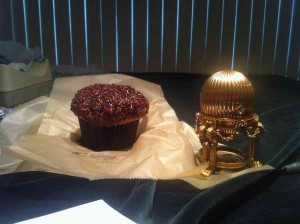 Decoded Past: ″How did you feel when you first saw the egg?″

Kieran McCarthy: ″Amazed… absolutely stunned! Disbelief was the first reaction because I think, like many people, when you hear the story, it’s so incredible and so preposterous that you couldn’t believe it was true. There was an element of disbelief, but when I finally handled the egg and saw Fabergé’s craftsmanship in this magnificent object, it was just sheer amazement.″

Decoded Past: ″Why do you think this egg has survived?″

Kieran McCarthy: “It’s a very restrained piece of gold work, it’s not as flamboyant as many people would expect and that’s maybe why it sailed through unrecognised for so long.″

Decoded Past: ″How often does something as rare as this come along?″

Kieran McCarthy: ″It’s unique, this is the only one of the missing Imperial Easter Eggs to have been discovered. It’s a one-off.″

Decoded Past: ″So you don’t think it likely that any others will come to light?″

Kieran McCarthy: ″Well, they might… others have come to light again after periods where they were known to exist in a collection… they were last seen in that house, or with that family. But this one hadn’t been seen since 1922, so its re-discovery at this moment is unique. This is absolutely the Holy Grail… I was trying to find a comparison that would be analogous to it, but I don’t think there is, there’s nothing like a Fabergé egg. It’s the ultimate object of everyone’s dreams and desires.″

Decoded Past: ″Are there any jewellers working today capable of achieving Fabergé’s standard?″

Kieran McCarthy: ″No… these are objects of a certain time, a certain society, and a certain culture, and the reason why they are so magnificent and so prized is that they are a product of that time. It’s that patronage, that patronage doesn’t exist now. For the imperial family, they grew up surrounded by works of art, whether it was 18th-century snuff boxes, Renaissance works of art… they had an appetite for objects like this. These skills are lost and there are many reasons for that. The other thing is that Fabergé was able to call on the very best mounters, gem setters, designers, engravers, who would all work together.

The problem is that in modern workshops the actual physical skills have actually been lost, and the product of that interaction has also been lost. If you go into a modern-day workshop, you wouldn’t have the finest designer, the finest setter, the finest gilder, the finest lapidary all working together and so it takes that interaction of craftsmen and that discussion, moving backwards and forwards to generate objects of this calibre. It doesn’t exist… goldsmith’s work of the past, unfortunately does exceed dramatically that of the present.″

Decoded Past: ″A story like this, I think, could lead to an increased interest in the arts. What advice would you give to somebody looking at a career in this field?″

Kieran McCarthy: ″It’s actually incredibly difficult to do… I was incredibly lucky. By sheer chance and serendipity I was able to work here. I don’t know what advice to give… I think it’s just carry on going. It’s all about keeping your mind open to what is possible… life can be wonderful and if you have a dream of being whatever, a bridge builder, or historian, just work at it and fingers crossed, it will happen.″

The Third Imperial Fabergé Easter Egg will be on show at Wartski, 14 Grafton Street, London W1S 4DE, for four days from 14th to 17th April 2014.