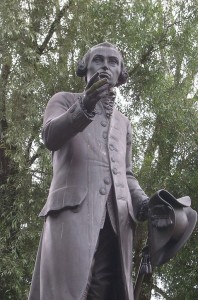 Immanuel Kant suggested that the world must have a beginning in time – yet it could not have had a beginning. Image by AndreasToerl

Immanuel Kant (1724-1804) lived in Könisberg in East Prussia, and, according to Bertrand Russell, he led an uneventful life despite the French Revolution and the Seven Years’ War, during part of which Russia occupied his country.  Kant was a proponent of the Rights of Man, and once said, (quoted by Russell)  “…there can be nothing more dreadful than that the action of a man should be subject to the will of another.”

In his great work, Critique of Pure Reason, which is a combination of rationalism and empiricism, Kant differentiates time and space in the following way.

1. Different times are not coexistent but successive.

2. Different spaces are not successive but coexistent.

What Does it Mean?

Understanding ‘a priori’ is essential in order to comprehend Kant’s rather difficult theory. A priori means something known to be true or false before you experience it. (A posteriori is the opposite, and means something whose truth you can only test through the medium of experience.)

Kant believes that our knowledge cannot transcend experience, but that this knowledge, in part, may have a basis other than experience.

Time is not an empirical conception, in other words, a conception gained through experience. If it were we couldn’t conceive of a “before” and “after” as Kant explains in his Critique of Pure Reason. Time, therefore, exists a priori: as Kant said, “Phenomena can be annihilated in thought, but as a universal condition, time cannot.”

Kant is saying is that we experience phenomena through experience, via our senses, ie. a posteriori, leading to understanding. Time itself is a necessary condition or foundation, on which all our intuitions are dependent. In other words, phenomena (or matter) may disappear, but time cannot.

Kant is very clear about this, when he says: “For neither coexistence nor succession would be perceived by us, if the representation of time did not exist as a foundation a priori. We cannot think of a phenomena as unconnected with time, but we can present to ourselves time void of phenomena.”

Kant believes that time, for us, is intuitive. We can only understand phenomena in its relationship to time but we can “…represent to ourselves time {that is} void of phenomena.”

Time, concludes Kant, is a “pure form of the sensuous intuition.”  Different times are just parts of one and the same “time.”

To the above, Kant adds the conception of change and motion. “…change of place, is possible only through and in the representation of time.”  Again, he is asserting that unless we have intuition a priori, we cannot comprehend the possibility of change. Therefore time is nothing other than the form of the internal sense.

Nor does time exist perfectly within things objectively. If time were in things “…we could not discern it or intuit it by means of a proposition a priori, ie. “outside of the world.”  In other words, if time were within things or phenomena, how would we be able to conceive of a “before” or an “after?”

“And precisely because our internal intuition presents to us no shape or form, we endeavour to supply this want by analogies and represent the course of time by a line progressing to infinity,” says Kant. This line to infinity implies a sense of only one dimension.

In his Critique of Pure Reason, Kant “proved” in one of his four famous antinomies – the term means a philosophical contradiction – both that time had a beginning, and also, that it did not have a beginning but was infinite.

Kant made examples of these antinomies to prove that it can be futile to try to use reason to resolve specific, unanswerable, metaphysical questions.

“The world, Kant says, must have a beginning in time, otherwise an infinite amount of time – an “eternity” as Kant called it – would have already passed in this world – but no infinite series can be completed. On the other hand, the world can’t have had a beginning in time, because this would imply a period of empty time before the world came into being, and nothing (least of all, a whole world) can come into being in empty time, as there isn’t anything to distinguish one moment in empty time from another.”

As Tallis says, there would not be a reason why one moment in time should give birth to the world.

Although Kant’s contemporaries and his successors claim his theories contain a few inconsistencies, they generally consider him (quote from Jeremy Harwood, 100 Great Thinkers, 2010, Quercus, ) “…the most influential philosopher since Aristotle.”

Kant founded an alternative system of philosophical thinking, in claiming that the existence of knowledge is a priori to the existence of the human mind, and this idea had great influence over his successors.

Bertrand Russell described Immanuel Kant as a philosopher who “appealed to the heart.”