As anti-Semitism rises again in countries like Hungary, “never again” is a reminder of atrocities as well as the sacrifices made by heroes like Raoul Wallenberg. Photo by M. Streich, Dachau Concentration Camp.

History measures real heroes through the lives touched by their selfless actions. In late 1944 Raoul Wallenberg, a Swedish diplomat in Budapest, helped save the lives of 100,000 Hungarian Jews scheduled for transportation to Nazi extermination camps.

Wallenberg’s story of confronting evil with the sword of humanitarian concern and moral action is a reminder that hatred can arise anywhere for no apparent reason, but that some men and women will always battle the dark side of human behavior. Wallenberg’s example is poignantly evident in Hungary today where anti-Semitism is a resurgent threat, particularly among far-right political groups.

Hungary at the End of WWII

As the Second World War was ending, Hungary, led by Nazi puppet Admiral Horthy, was home to the last sizeable Jewish community. The Nazis had recruited local fascists, mostly young ruffians calling themselves the Arrow Cross, to harass Jews and assist German SS troops in gathering them for shipment to death camps.

Dragging women, children, and older people to the banks of the Danube River to be drowned, these “patriots” took their cue from Nazi leaders like Adolph Eichmann, who had arrived in Budapest to supervise the pogrom. Time was of the essence: Soviet troops were making their way to this ancient city on the Danube. The war would soon be over.

Wallenberg’s vocation had been set long before arriving in Budapest. Through his well-connected and affluent Swedish family, he had witnessed anti-Semitism during his travels. He not only possessed the determination to save lives and make a difference, but he had the pluck to look powerful men in the face and demand they make crucial, though unpopular, ethical decisions. Budapest’s Jews were issued safety passes, placing them under the protection of the Swedish government, a neutral nation. 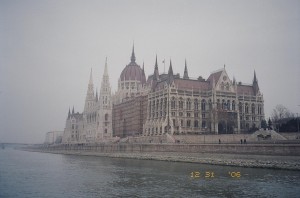 In 1944 Budapest was home to the largest Jewish community in Europe still untouched by Nazi Germany. Over 100,000 were saved by Wallenberg and the Swedish legation. Photo by M. Streich, Hungarian Parliament.

Wallenberg purchased buildings to house the Jews, keeping them from the gangs determined to transport them into the web of Nazi camps where millions perished. The Nazis murdered Jews, political prisoners, Russian POWs, homosexuals, and members of religious faith traditions deemed disloyal to the prevailing power. The Jewish genocide, however, was a uniquely horrific undertaking giving the world the definitive phrase, “never again.”

The meeting of the World Jewish Congress in Budapest during the first week in May 2013 reflected, according to the German weekly Spiegel, a “…symbolic protest of growing anti-Semitism in Hungary…” In November 2012 the right-wing politician Marton Gyongyosi stated, according to Spiegel, “that people of Jewish heritage are a ‘security risk’ and should be registered on a nationwide list…” Hungary’s parliament, which has seldom reflected universal democratic principles, was accused of “creeping fascism.”

Wallenberg was successful in 1944, even to the point of threatening SS General August Schmidthuber, who had planned a final massacre of the Budapest Jews before the Russians arrived to liberate the city. In Budapest, there would be no “final solution,” although the fear and hatred lived on, even as it does in postmodern Hungary.

Wallenberg, that Swedish angel of hope, disappeared from history after meeting with Soviet military leaders. Speculation exists that he died in either Moscow’s Lubyanka Prison or in one of Josef Stalin’s remote punishment camps.