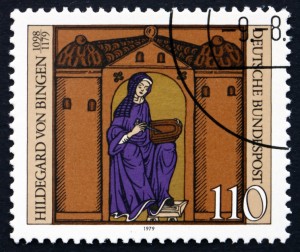 Hildegard of Bingen is remembered for her scholarship. Image by laufer.

There have been four female doctors of the Church; Popes and others in the Church considered these thinkers to have vitally important thoughts. Hildegard was historically the first, but was the last of the four to receive this honour.

Hildegard was a strong-minded, holy, but sometimes difficult character, whom popes and bishops consulted, but who sometimes took men to task in no uncertain terms.

There are few polymaths, scholars who master a wide range of disciplines. Hildegard was one such. She was a composer of church music, a religious thinker and visionary, and a herbalist, besides being abbess of her religious community.

Noble parents were often ruthless in sending sickly and unattractive girls to convents, as they were unlikely to fetch much dowry, and this was the fate of eight year old Hildegard. Cursed with what seems diagnosable as persistent migraines, and often confined to bed, she was not regarded as a much of a catch for a young lord.

So in 1206, Hildegard’s family packed her off to a convent at Disibodenberg, which was subordinate to a male Benedictine monastery. Here, she was entrusted to Jutta von Spanheim, a noblewoman who taught the oft-bedridden child to read and write.

Convents were places attractive to scholarly women, as they were places where women could find learning, and in Disibodenberg the knowledge-hungry Hildegard learned Latin, Scripture, and some philosophy and theology, although her Latin never achieved expert standard.

In 1136, Jutta, by then abbess, died and Hildegard was elected to replace her. This was the occasion of her first recorded clash with males. She decided to move the female house to Rupertsberg, possibly to keep the women away from the attentions of the male monks, who were not always devoted to celibacy.

The abbot objected to the move, but Hildegard stood (or rather laid) her ground, publicly lying rigid on a rock until the abbot gave way. One peculiarity of her rule as abbess was that she allowed nuns to wear jewelry, as she believed that beauty was a way in which women could praise God.

But Benedictines, be they male or female, are obliged to work, and Hildegard was no exception, for she spent much time nursing. It was the nursing experience that made her take an interest in herbal medicine, about which she wrote.

A modern statue of Saint Hildegard. Image by CPN.

The Benedictines of Hildegard’s time were keen on inner experiences, personal experiences, such as visions, and an immediate relationship with God, and Hildegard was part of this culture.

The visions began early in her life and may be connected with her tendency to suffer  migraines, but she kept them to herself until she became abbess, when she had a very intense and powerful vision of being filled with a fiery light that illuminated the true meaning of the Scriptures to her.

This led her to begin her first work, the Scivias. The work took several years and underwent several amendments, but when she passed the early sections on to Pope Eugenius III, he was impressed and approved and encouraged her work.

In the course of this work she elucidated a cosmological theory, not a modern one, which saw the universe as a series of spheres surrounded by an outer shell, like an egg. For this work, we see her as an early scientist, the first female to ever, as far as is known, expound on cosmology.

In the course of years other works were to follow, such as the Liber Vitae Meritorum (Book of the Merits of Life) and the Liber Divinum Operum (Book of Divine Works). Included in her works were the scores of various works of music, which proved influential in the development of mediaeval church music, poems and plays.

Hildegard’s Impact Beyond the Monastery

Hildegard soon became a confidante of popes, bishops and kings, who would seek her advice on spiritual matters, and sometimes received her opinions whether they wanted them or not. She is known to have communicated with the Emperor of Germany and wrote letters to Henry II of England and his queen, Eleanor of Aquitaine.

She could be verbally caustic. At Rupertsberg she had a friend, Ricaldis von Stade, whose brother, an archbishop, decided to appoint Ricaldis as abbess of a convent at Bassum. Hildegard was unhappy about Ricaldis’ departure and verbally berated the archbishop in a letter.

The issue went on for some time, and though Hildegard won and gained approval for Ricaldis’ return to Rupertsberg, Ricaldis died before the return could take place.

Hildegard carried on a long intellectual dispute via letter with another strong minded female intellectual, Elisabeth of Shonau – this exchange was unusual for women of her historical period.

She also preached, not common for a woman of that time, although the church never banned women preachers, and she spent time travelling around Europe preaching against war. She seems to have pacifist tendencies.

Yet, Hildegard had time for ordinary folk, many of whom contacted her seeking her prayers in support of their petitions. It as for them that she wrote two late works, the Liber Simplicis Medicinae  (Book of Simple Medicine) and Causae et Curae (Causes and Cures) which expounded her research into German folk medicines which doctors seeking inexpensive medications for the poor could use. She also wrote about gynecology, about which males were not writing.

Was Hildegard a Feminist?

Hildegard of Bingen was a woman of her time and accepted the traditional view of women as physically weak. But she thought that she was living at a time when women had to take over the responsibilities neglected by men, of whose behaviour she was oft-disapproving. Yet in her writing she personifies certain heavenly virtues in feminine terms: Ecclesia (church), Caritas (love), Sapientia (wisdom) and some others.

She also spoke of the marriage of the church to God. In none of these ways was Hildegard totally original, for the personification of church and wisdom as feminine is rooted in Scripture, yet it is in her feminine emphasis that she is original. While not a feminist, she was nevertheless assertive of the value of women and their femininity.

Strong minded women are often unpopular with men, and after her death in 1179, Hildegard was not made a saint, though the ordinary folk insisted on calling her Saint Hildegard, whether the church authorities liked their doing so or not. But eventually Benedict the Sixteenth in 2012 recognized her merits and made her officially a saint and doctor of the church. Her contribution to theology lies in her assertion and promotion of feminine imagery, oft-neglected in a male dominated discipline.

Newman, Barbara. Voice of Living Light: Hildegard of Bingen and her World. (1998). University of California Press.

Maddocks, Fiona. Hildegard of Bingen: The Woman of her Age. (2001). Faber and Faber.