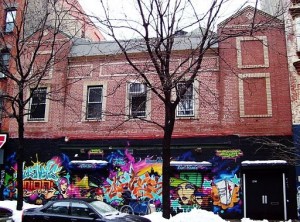 Graffiti art provides the artist a means of “unrestricted expression”. Image by Beyond My Ken.

Graffiti artists spray-paint buildings, large walls, billboards and fences – all re-designed a-la pop-style. The practice of graffiti historically annoys people, but through all of its negative connotations, society almost always refers to graffiti as graffiti writing (tags) or graffiti art. So should we think of the practice of writing and painting on walls as art or even literature?

A new exhibition at the Museum of the City of New York suggests that we should, calling it City as Canvas; and it follows similar exhibitions of graffiti art in other big name museums and art galleries like another New York museum, the Guggenheim Museum.

The culture of the streets has a long history of association with graffiti. The writing on the wall, so to speak, became a part of street life as large urban centres served as the stomping grounds of gangs and even the homeless.

As Vitaly Friedman writes, “Street culture and graffiti are well-known for being provocative, appealing, bold and uncompromising. Originally used by gangs to mark their territory in some urban areas, graffiti has now become a rich medium for unrestricted expression of ideas and statements.”

The History of Graffiti

We tend to associate graffiti with the era following the 1960s, with pop culture reflecting mass political and sociological protests. However, graffiti, a term which means inscriptions and figure drawings, dates back to the beginning of human history. Cavemen drew line figures on cave walls. Artists scratched inscriptions on rock surfaces in the basalt desert of southern Syria, Eastern Jordan and northern Saudi Arabia as early as the first century BC. The walls of the ancient sepulchers like the Catacombs of Rome or Pompeii also have inscriptions and figure drawings.

The word, graffiti, evolved in the late twentieth-century to refer to graphics applied in public places, primarily on public property, as a means of deliberate vandalism. This graffiti was created to evoke a reaction, to express an opinion, inspire provocative thought, to mark a territory, or even to express a romantic interest.

Modern graffiti came to the big cities in the United States, particularly New York, in the 1960s. Graffiti art on public structures defined not only the city, but the life of its streets. The art covered subway cars, subway stations, public structures and buildings, defining itself as “street art.”

It was not until the 1980s that art galleries started to consider graffiti as artwork. “But graffiti is, by definition, a defiant and public exhibition,” Gastman insists. “There’s an earned respect and craft to graffiti work done outside in the streets. There’s also an intrinsic subversion and vanity to an art form that defines itself by writing one’s name over and over again on property, which doesn’t translate when it moves into a more sterile setting like a gallery.” Graffiti art, seen by many as an off-shoot of Pop Art, became an important statement of urban life, one that galleries started to recognize as significant enough to bring inside, off the streets and into the galleries.

A Chinese-American painter from San Francisco, Martin Wong moved to New York’s East Village in 1978. He befriended many young artists, particularly the street artists, and the graffiti artists who were making their creative statements on public property. Wong patronized the work of these artists, supported them by offering shelter and a good supply of spray paint, which he often stole from the art-supply store where he worked.

Wong became a leading figure in not only supporting, but also commissioning and collecting works by these street artists. He noted the importance of this new style of art, known as the Graffiti Writing Movement, and he convinced some of these artists to start working on canvas so that their works would be more permanent and could hang in a public art gallery setting. Wong started his own collection of graffiti art, including large canvas paintings and sketchbooks full of graffiti drawings.

On February 14th, a historic exhibit will open at the Museum of the City of New York, featuring the collection from the estate of the late Martin Wong. According to Stephanie Strasnick, “Wong was a true believer in graffiti and its enduring qualities as an art form.”  This exhibit pays tribute not only to the collector, but also to the collection itself and the vitally important statements that these works make.

Yes, graffiti writing, graffiti art, street art, whatever you want to call it – is art. After all, art is what the artist says is art.

The Museum of the City of New York. City as Canvas: Graffiti Art from the Martin Wong Collection. (2014). Accessed on January 21, 2014