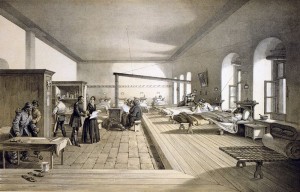 Many describe the Crimean War as the most bungled war Britain ever fought. Best known for the British Army’s tragic and disastrous Charge of the Light Brigade made famous by Lord Tennyson’s epic poem, outdated tactics, poorly managed logistics, and medical care more deadly to the British Tommy than enemy fire marred the early 19th century campaign.

Fought between Russia and the allied nations of Britain, France, and Turkey, the Crimean War is also known as the conflict that gave birth to the modern nursing profession and earned Florence Nightingale the name bestowed upon her: the Lady with the Lamp.

The war began in the summer of 1853, when the Russian Black Sea Fleet attacked and destroyed the fleet of the dying Turkish Empire. The victory put Russia in the position to capture Constantinople (today’s Istanbul) and the Bosporus Straits, threatening French and British interests in the Mediterranean. In March 1854, Britain declared war on Russia and allied itself with France and Turkey.

That September, British and French forces landed on the Crimean Peninsula, on the north shore of the Black Sea. Following a Russian defeat at Alma, the allied nations captured the small port of Balaclava, which they established as their logistical base, and encircled Sevastopol, home of the Black Sea Fleet.

Disaster Snatched from the Jaws of Victory

The British Army was not prepared for a prolonged campaign despite its initial victories. It hadn’t fought a major conflict since Lord Wellington’s victory over Napoleon at Waterloo in 1815, and its tactical thinking hadn’t changed much since then. 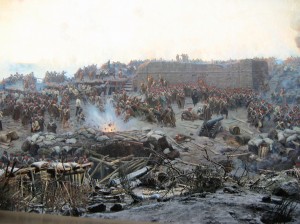 The siege of Sevastopol exposed British soldiers to harsh conditions that reduced the fighting force from 55,000 troops to just 11,000 fit enough to fight. Image by Valentin Ramirez

The Industrial Revolution, however, had changed the mechanics of war. Smoothbore muskets firing short-range lead balls had been replaced with muskets with rifled barrels and the new long-range Minié conical bullet. Improvements in field artillery brought about the tactic of blind, or indirect, cannon fire. Such developments put an end to Napoleonic tactics and introduced a new form of combat—trench warfare.

Antiquated British tactics led to the Light Brigade debacle at Balaclava. The charge of light cavalry into a valley bristling on three sides with modern cannon and rifles could end only one way—disaster. One of every three horsemen were killed, wounded, or captured. The Russian guns remained in place.

The British logistics training was equally inadequate. Ammunition and particularly food remained in short supply. By the time the Allies reached Balaclava, meat was rarely available for the troops; when it was, it was inedible. When the Tommies did get edible meat, there were no pots or fuel to cook them with. “The Commissary did serve out a small portion of fresh meat,” a British colonel recorded in his diary. “Too late! No fires or means of cooking!”

Britain sent three thousand pounds of fresh vegetables along with the troops to ward off scurvy. It rotted aboard cargo ships before distribution to the troops and was tossed overboard. By February 1855, scurvy was rampant throughout the British forces.

Shortages of Medical Supplies and Skills

The winter of 1854-1855 in the Crimea was particularly severe. Bitter, Arctic-like blizzards were followed the next day with torrential rain. Snow turned to frigid slush. Sleep in the trenches was nearly impossible. British Tommies began succumbing to disease, exhaustion, and frostbite.

Unfortunately, medical care in the British Army was as arcane as its tactics and logistics. Though the germ theory – the recognition that microorganisms caused infections – was still in its infancy, simple sanitation measures were known to reduce infections and death. British Army hospitals in Crimea and Scutari, Turkey, failed to enact these measures.

Edward Mason Wrench, a young British Army surgeon, wrote disparagingly of the care given wounded at the British hospital at Balaclava. “I had charge of 20 to 30 patients, wounded…mixed with cases of cholera, dysentery, and fever. There were no beds…or proper bedding. The patients lay in their clothes on the floor, which…was as muddy as a country road.”

The lack of supplies and old-school biases also hampered medical care. “We were practically without medicines,” Wrench wrote. “[T]he supply landed at the commencement of the campaign was exhausted, and the reserve had gone to the bottom of the sea in the wreck of the [supply ship] Prince so that in November 1854 even the base hospital at Balaclava was devoid of opium, quinine, ammonia, and…drugs.”

Even with the unlikely availability of adequate medical supplies, British doctors were forbidden to use many of the latest clinical innovations. Wrench complained, for instance, that the Director General of the British Armed Forces had virtually forbidden the use of the new anesthetic chloroform during surgeries. The view of the hidebound medical bureaucracy, Wrench wrote, was that the “cries of the patient undergoing an operation were satisfactory to the surgeon, as an indication that there was no fear of syncope and that the pain was a stimulant that aided recovery.”

Infected wounds have always been a major cause of death in warfare. In the Crimean War, however, more wounded soldiers died of infectious diseases contracted in the hospitals than from infected wounds. Many believed that a wounded soldier would have a better chance of survival if left on the battlefield than if treated in a field hospital. 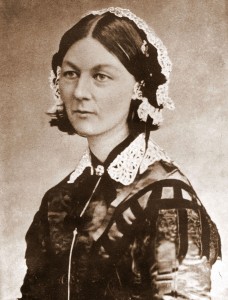 The Lady with the Lamp

The Crimean War became the first conflict in which the telegraph and the camera provided news coverage to the home front. News articles and photographs documented the wretched conditions inflicted on the British soldier. Public outrage forced the British war minister to invite a 33-year-old nurse named Florence Nightingale to raise a corps of civilian nurses to help improve patient care in the Crimea.

Born into English high society, Nightingale was well-educated and well-travelled. Despite her highbrow upbringing, Nightingale felt her calling lay in providing care to the sick and injured. In 1851, at the age of 31, she began her training as a nurse. A year later, she was appointed the superintendent of London’s Institution for the Care of Sick Gentlewomen in Distressed Circumstances.

At that time, nursing in England was not considered a profession. Nursing care was left to “immoral” women who spent most of their work shift drunk. “Drink was the curse of the hospital nurse,” wrote one physician. “The nurses are drunkards.” As superintendent of the Institution for the Care of Sick Gentlewomen, Nightingale established the first program to train professional, well-educated, and respectable nurses.

In October 1854, Nightingale set out for the hospital in Scutari with 38 nurses. Unwelcomed by the British medical corps, the nurses established a foothold by improving meals for the patients. Convinced miasma- or bad air- caused deaths, Nightingale eventually set about improving cleanliness and sanitation, and general patient care in the hospital.

Stories in the British press described Nightingale’s work in Scutari and the Crimea. The descriptions of her administrations while walking the wards at night with a lantern caring for patients inspired the sobriquet, the Lady with the Lamp.

But Nightingale was more than an angel of mercy. She had a passion for statistical analysis. She showed that in the first seven months of the war, British Army field hospitals suffered a 60 percent death rate from disease alone. Following the improvements she ordered, that death rate dropped to nearly the same experienced by hospitals back in England.

Report to the Minister of War

The Crimean War ended with the signing of a peace treaty in 1856. Upon returning to England, Nightingale fought for establishment of a Royal Commission to report on military health care during the conflict. After six months, and in poor health herself, she produced her report, Notes of the Matters Affecting the Health, Efficiency and Hospital Administration of the British Army.

Nightingale wrote the first nursing manual, Notes on Nursing, in 1859. The following year, she established the Nightingale School for Nurses. She died in 1910, having secured her position in history as the mother of modern nursing.

The British Army was not alone in experiencing casualty care problems during the Crimean War. Both the Russians and the French experienced high disease rates. The French Army, however, benefited from a well-developed casualty care system first implemented during the Napoleonic Wars.

Unfortunately, the United States paid little attention to the lessons learned during the Crimean campaign. When the American Civil War erupted in 1861, neither the Union nor the Confederate armies were prepared for the kind of casualties incurred from modern weapons. Nor were they prepared for the amount of disease that plagued large populations of soldiers.

It would take four bloody years of war for the Americans to understand what Florence Nightingale learned on the peninsula of Crimea.

McCoubrey, H. Before “Geneva” Law: A British Surgeon in the Crimean War. (1995). International Review of the Red Cross.