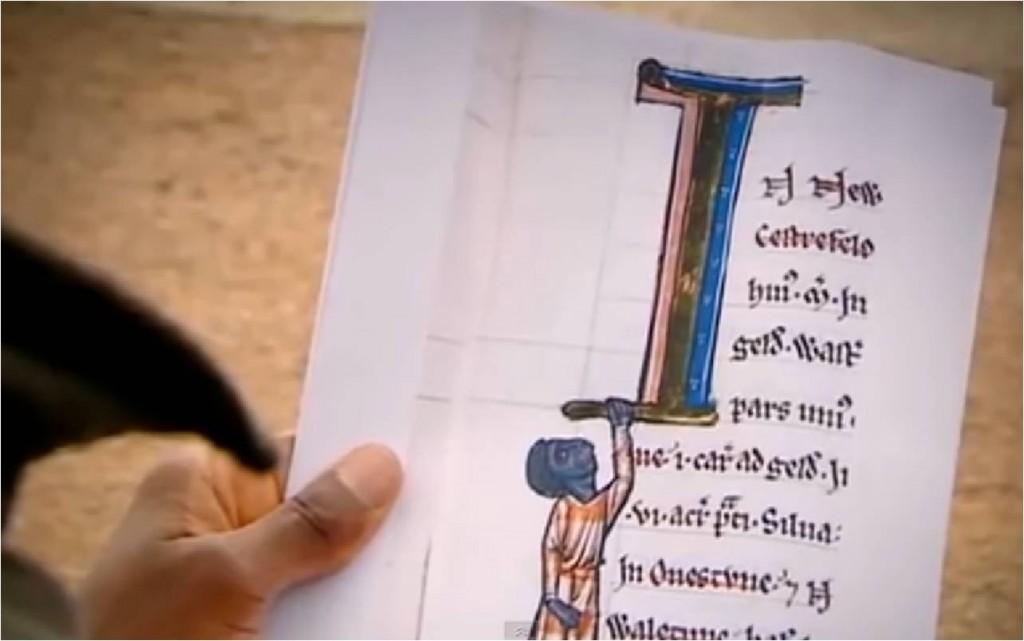 In 2010, a forensic investigation of a historic skeleton added a black person to the thirteenth century recorded population of England.

Is this skeleton physical proof of an African presence in medieval England and if so, who was this man? Where did he come from? Where and how did he live his life? How did this man come to die in Ipswich?

A black man clinging to the initial letter ‘I’ seems quite significant in English black history as a solitary representation of the black presence in thirteenth century England.

British lawyer-turned-historian Onyeka believes the image signifies that black people integrated into English society then. “The idea of the African was known; people drew pictures of them,” he said. “There was not a scientific understanding of race. That was not present in medieval England.”

His research in the U.K. National Archives suggests tolerance of workers of non-European skin colour based on personal relationships and on respect for their work and skills, he told Dr. Xanthe Mallet on the History Cold Case television show.

The History Cold Case team investigated a historic skeleton classified by its skull shape as sub-Saharan African male. The body was originally interred in the cemetery of a medieval Christian monastery in the East Anglian port of Ipswich, England.

Stable isotope testing from a tooth sample and a thigh bone and DNA analyses showed that ‘Ipswich Man’ was born after 1190 and before 1300 in Mediterranean North Africa or southern Spain, where he spent his early life. Skull analysis confirmed that he was not sub-Saharan in origin but possibly Tunisian.

The analysis showed that he lived in a cold, damp climate for at least the last ten years of his life, so he was probably not a casual visitor to eastern England. Before he reached sixty years of age, he died of an abscess on his spine, a painful and disabling condition.

Was that why he ended his days in a medieval friary?

A Medieval African at a Christian Monastery?

Medieval funeral procession at an English Greyfriars monastery. Noblemen walk ahead while the monks bear the coffin. Image by John Nichols.

Franciscan friars had a specific mission as apothecaries and physicians, and this man’s burial was among others with skeletons marked by disease. He did not have to serve as a friar to receive treatment in their hospital, but he did have to be Christian and able to afford to pay for care.

“In medieval England the only hope this man had for pain relief and medical care in his final days would have been from the religious establishments who tended the medicinal herb gardens and had some quite sophisticated and successful methods of easing pain.” Professor Black wrote in the Daily Mail. “The friars would have taken him into their infirmary as his condition declined and […] they nursed him towards his death.”

The Ipswich friars had papal permission to bury their own in their graveyard together with members of ‘their family’ which could have included patients from their infirmary as well as benefactors such as Robert Tiptoth who, in the 1270s, had paid for the building of the friary.

Could Ipswich Man have been a prisoner taken at the last crusade from 1270-1271? Baron Tiptoth went on the crusade together with Prince Edward and he received funds to take five knights with him. They landed in Tunis in support of the French King Louis IX, noted for his conversion of Muslims to Christianity.

From the Flores Historiarium, a chronicle kept by the monks of St. Albans, the History Cold Case team discovered four ‘Saracen’ prisoners who travelled to England from the ninth Crusade in 1272 with Thomas de Clara, an associate of Tiptoth’s.

What happened to them? These four prisoners may have languished in prison or worked as servants, or Clara may have taken them to his estates in Ireland.

King Louis IX particularly favoured the Trinitarian Order of monks, giving them a chapel within his châteaux at Fontainebleau. Since the Trinitarian Order was active in England from the early 1200s, charged with arranging ransoms for knights taken prisoner at the crusades or captured by North African pirates; it is possible that these ‘Saracens’ became bargaining chips or even exchanged for Christian soldiers, and so returned home.

The Significance of the Ipswich Cold Case

Alternatively, the four ‘Saracens,’ like Ipswich Man, could have been integrated into the local population.

In The Missing Tudors, Emma McFarnon suggests that by the end of the Middle Ages there was a long-term African population in England that was fully integrated into parishes and social groups, and their births and deaths appear in racial descriptions in public records.

Forensic analysis has now confirmed that presence, and yielded information about some of the origins of that black population. It also raises questions about the numbers of other African English remains that may yet be present in the vast amount of human remains that British archaeologists have archived.

Anyone who has tried to trace their family history back to the Middle Ages, or attempted to uncover the history of long-ruined buildings knows how complex and confusing the evidence trail is. Perhaps the Ipswich History Cold Case has helped open doors or will attract funding for further research into England’s past ethnic diversity.