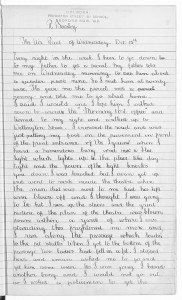 How did people manage the vast changes and difficulties during World War I? How did governments boost morale at times of deepest depression? How did children cope with the war? Enduring War: Grief, Grit and Humour at the British Library answers all these questions and more and Decoded Past speaks to curator Dr Matthew Shaw in an exclusive interview.

Enduring War: Grief, Grit and Humour is part of the British Library’s programme of events to mark the centenary of the First World War. Cartoons and posters, post cards and Christmas cards, correspondence, poetry, books, pamphlets and manuscripts from the period show how people coped with life during World War I.

From moments of patriotic fervour to times of darkest despair, these items show the grief, grit and humour of people both at home and on the Front.

Enduring War: Grief, Grit and Humour also showcases the British Library’s involvement in Europeana 1914-1918, a major pan-European programme to digitise over 400,000 items from World War One.

Personal Views and Momentos of War

A young schoolboy’s account of an airship raid over London shows how Britain, and Londoners in particular, were not ready for the Zeppelin airship raids. Most of the boys, aged between nine and thirteen, were either playing out in the streets or preparing for bed. The account shows this boy’s fear and excitement as well as his response to the injured people around him and the damage to surrounding buildings. 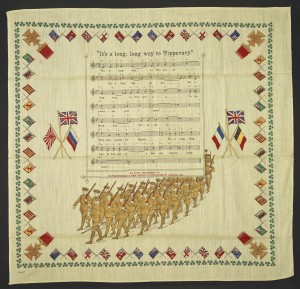 Also on display is a souvenir handkerchief bearing the words and music of ‘It’s a long, long way to Tipperary,’ a popular World War I ballad.

The deceptively cheerful tune expresses the longing for home felt by so many soldiers and a Daily Mail journalist wrote about soldiers singing the song as they arrived in France in August 1914. 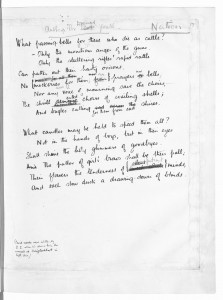 Wilfred Owen’s Anthem for Doomed Youth reflects the devastation of war. Copyright image courtesy of the Estate of Wilfred Owen, used with permission. All rights reserved.

Wilfred Owen’s 1917 poem Anthem for Doomed Youth is especially poignant. For Owen (1893-1918), World War I was far more complex than we might first think.

His poetry shows how much the cost in human lives appalled him and we now consider his work as a universal representation of the devastating waste of war.

Owen wrote some of his later works, including Anthem for Doomed Youth, with encouragement from Siegfried Sassoon and this hand-written draft shows evidence of Sassoon’s editorial advice. We can clearly see the word ‘dead’ amended to ‘doomed’ in the title. 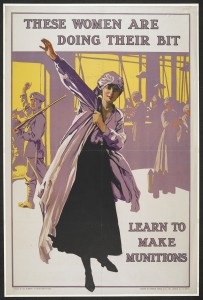 Government propaganda materials played a huge part in boosting morale and spreading messages. Poster campaigns called on the population to sign up – not just for the armed forces, but also for war work.

At the start of the First World War, many women lost their jobs.

Those working in the textile industries were especially hard hit, but many soon took on jobs in agriculture or transport previously done by men. The poster, These Women are Doing Their Bit, shows women going to work in the munitions factories.

War Humour and How it Works

The immediate possibility of death in the field added an extra punch to the jokes. Humour was a valuable weapon in demonising the enemy. 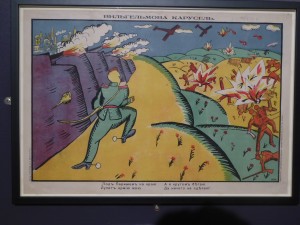 Decoded Past: How long does it take to plan an exhibition like this?

Dr Matthew Shaw: The exhibition here at the Library took several years to put together. We knew three years ago when we started working on the Europeana collection that we’d want an exhibition to tie in with that, and about a year ago we really started in earnest putting together a list , going through the conservation procedures and so forth and starting to plan what the exhibition would actually be.

Decoded Past: With such a vast collection at your disposal how difficult was it to choose what to include or exclude. How do you decide?

Dr Matthew Shaw: Enduring War is a free exhibition in the front hall so we have some constraints in terms of the light levels and so forth. We had to limit it to eighty items which is quite a lot for this space. Actually,  it’s a drop in the ocean when you think of the Library’s collections. We really wanted to focus on things that illustrated the various points we were drawing out but that also brought out the real human connections like the schoolboy’s account of the Zeppelin raid or the poignant last letter sent home from the Front.

Decoded Past: The exhibition also showcases the Library’s work for Europeana 1914-1918 – can you tell my readers a bit more about this project? 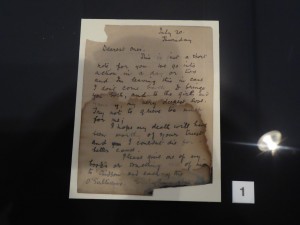 Dr Matthew Shaw: Europeana 1914-1918 is a free major online digital resource with over half a million items from libraries across Europe as well as materials that people have found in their attics and brought in to collection days across Europe. They’ve been digitised and added to the collection along with film from the period… it allows research across all these collections.

The Library has created a learning site, a web resource at British Library/WorldWarOne which has five hundred of the best items, experts’ essays, texts and learning resources. Also there’s a book just been published by British Library publications called ‘Hidden Stories of the First World War’ which draws out the real gems of those uncovered histories of these collection days.

Decoded Past: What message do you hope people will take from the exhibition?

Dr Matthew Shaw: The exhibition doesn’t really have a message… it really tries to answer the question ‘how do people cope?’ We want to make the experience of the war more human, more complicated perhaps, than stereotypical views of the war might be. We want to explore the range of experiences and the responses people had… from the sense that it was a sacrifice worth making, that people felt they had to serve the values of the day, through to those who were very quickly disillusioned with war. And how did people cope at home? Why did people volunteer to knit and how did they find the experience of working in munitions factories? For example, what was it like to be an Indian soldier going round the world to serve on the Western Front?

Enduring War: Grief, Grit and Humour at the British Library

Enduring War: Grief, Grit and Humour offers a valuable insight into how people coped with life during the First World War. The exhibit is open until 12th October 2014 at the British Library.