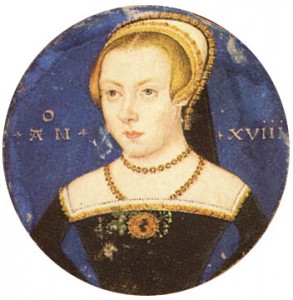 Shown here is portrait miniature of an unknown lady, by Levina Teerlinc. Image by Ras67.

Levina Teerlinc (c1510/1520 – 1576) was a Flemish portrait miniaturist who worked in the courts of Henry VIII, Edward VI, Mary I and Elizabeth I.

Teerlinc took over the position of court painter from Hans Holbein the Younger (c1497-1543) after he passed away. She must have been very talented, because she was provided with an annual salary much higher than her male predecessor.

The Fine Art of Portrait Miniature

Basically, a miniature painting is an extremely tiny painting. By tiny, I mean usually the size of a locket, because that’s where the miniature would usually be placed. It was something to carry with the person who owned it; it was a treasure, a precious keepsake.

Historically, miniatures were a popular format to paint portraits. They were easy to keep hidden for personal pleasure only and they were easy to transport, to carry on long journeys. For example, ambassadors would carry a portrait miniature of a prospective royal bride from one court to another so that the royal groom could see his intended.

The first portrait miniatures were actually painted by artists who were trained to illustrate hand-written books, an art that traces its roots back to the 7th century.

How Can Someone Paint So Tiny an Image?

Good eyesight and a very steady hand would be a necessary attribute to painting something so exquisitely detailed, yet so very tiny. The technique, the tools and the materials of a miniaturist were very similar to those of an artist who did book illustrations.

The medium was basically watercolour on vellum, which was a fine animal skin. According to the Victoria and Albert Museum, Elizabethan miniaturist, Nicholas Hilliard (c1547-1619), who would have been at the royal court about the same time as Levina, was very partial to painting on the skin of an aborted calf as the surface was hairless and very smooth.

During Levina’s time in court, miniaturists usually made their own paints; pigments came from minerals, natural earths, plants, insects, as well as gold and silver leaf. The artist would grind pigments from these sources into a fine powder, bind it with gum Arabic, then mix it with water, usually in mussel shells, which made convenient little paint pots.

The brush would have to be very fine in order to paint exquisite details in such a minutiae scale. According to the Victoria and Albert, artists used brushes made out of squirrel hair set in quills and mounted on wooden handles. A small stoat’s tooth set in a wooden handle would be used to polish the gold and silver used to paint the jewels and inscriptions.

The artist would also have to be more than just competent at drawing, with a good eye for composition. Studying Levina’s intricate miniatures, it is a marvel to see how detailed she was in illustrating even the tiniest detail of the person that she was painting.

In Levina’s miniatures, the pose is usually from the waist up, and sometimes shows the person’s hands. According to the Victoria and Albert, there is a miniature in a private collection of Lady Katherine Grey, the sister of the ill-fated and martyred Lady Jane Grey, showing Katherine holding her child and wearing a miniature of her husband. The miniature image in the painting was executed with exquisite detail in itself.

Miniatures of other royals, Queen Mary I, Queen Elizabeth I, depict these women in their finest costumes and finest jewels, no detail missed. One of Levina’s miniatures of Elizabeth in her coronation robes, the robes themselves illustrated in great detail, depicts even the immaculate detail of the real diamond in the sceptre. When you consider that these miniatures are about 2 inches by 1 inch in size, the execution of these works must have taken great skill, talent and a considerable amount of patience.

It is interesting to note that the incredible minute detail in these miniatures is painted so accurately to scale and subject matter, that it is only under high magnification that one can truly appreciate the artist’s very refined techniques, which may include stippling (a shading technique using small dots), hatching (an artistic technique used to create tonal or shading effects by drawing closely spaced parallel lines), or even pointillism (a technique using small, distinct dots of pure colour, something which became popular much later in history with the Post Impressionist like George Seurat (1859-1951)).

Portrait miniature of Elizabeth I done about 1565 by Levina Teerlinc. Image by PKM.

Individual brushstrokes are difficult to detect, even under magnification. However, according to Harris and Nochlin, some of the miniatures attributed to Levina show “a fine, dotted technique, stronger tonal contrasts, and carefully defined contour lines.”

By using these techniques, Levina was able to produce an almost perfect balance of colour and detail through the application of very thin layers of exquisite colours, which, in turn, facilitated the reflection, or the illusion of reflection, of light.

Levina’s patrons could depend on her work for its accuracy as well as her rendition of very specific features that identified the sitter, the person in the portrait. Her use of colour was very remarkably realistic. For example, Levina was one of the few portrait artists of this time period to use a pink tone with flesh tints on the faces of the people in her portraits. Other artists of the time used primarily shades of white for the faces.

Why is Levina Teerlinc’s Work So Important?

History records Levina as being the only Flemish portrait miniaturist at the royal court of England between 1546 and her death in 1561. She must have had considerable respect as an artist, for, even though she was a woman, she was given very specific duties at court: She was the court’s portrait miniaturist.

Levina was never asked to paint large works or stage scenery – and she was never instructed to do engravings for books or to assist other court artists in their work.

Historians have sadly overlooked the work of Levina Teerlinc, as well as many other female artists of this period, primarily because she was a woman. Her works are largely unsigned, which makes positive attribution to the artist very difficult. Only through stylistic studies and references to her work in court and personal documents of the time, historians have pieced together the puzzle of this artist’s distinct style and her contributions to the art world.

Bergmans, Simone. The Miniatures of Levina Teerlinc. (1934). The Burlington Magazine for Connoisseurs. Accessed on March 27, 2014