So runs Psalm 29, verses 5-1, and it may also be an apt description for events of the 16 March 1956 when two earthquakes struck in Lebanon. The USGS, less poetic than the Bible, and in this instance strictly factual, sums up thus: “Two earthquakes approximately 9 minutes apart. 136 killed, 6,000 houses destroyed and 17,000 damaged in 400 villages in the Chouf region.”

Earthquakes and the Dead Sea Fault

Although the Levant (broadly speaking, Syria, Lebanon, Israel and Jordan) isn’t known for its earthquakes as much as for its turbulent human history, it is a seismically active zone. Like the fault zones of California, it’s  a transform boundary comprising a number of different, broadly parallel strike-slip faults and takes the name of the dominant – in this case the Dead Sea – fault.

The fault zone runs along a rift which links the Gulf of Aqaba and the Red Sea in the south to the Anatolian block in the north. To its east lies the Arabian tectonic plate and to the west the complex jumble of faults and crustal blocks that mark the final stage in the the closure of the Tethys Ocean – what we know as the Mediterranean Sea – as Africa and Eurasia collide. The area includes extensional movement as well as lateral slip – as is evident from the existence of the Dead Sea and other basins.

The map shows earthquakes since 1900; clearly the region has been vulnerable to seismic activity for very much longer.

Written records indicate that the history of the region is punctuated by regular large earthquakes, and geological studies take the record even further back.

Although these large tremors predate the development of seismometers, it’s possible to assign an estimated magnitude; sources point to several major events in excess of M6.5. Possibly the largest was that which struck Syria in 1170 and which may have had a magnitude of around M7.7.

Looking Back to the Bible

The Levant is the geographical heart of the Bible. The lament from the Psalm quoted above is by no means the only reference to possible major earth movements, even where they are not specifically attributed as such.

Two key events are the destruction of the cities of Jericho (by human activity on divine instructions) and Sodom and Gomorrah (direct intervention from on high). 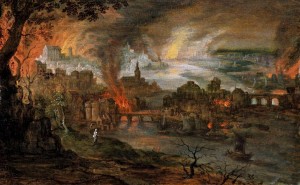 The Bible gives a graphic description of the destruction of Sodom and Gomorrah. Painting by Pieter Schoubroek.

The book of Joshua describes how, after elaborate preparation, Joshua led his men in an assault on the city of Jericho. “And it happened when the people heard the sound of the trumpet, and the people shouted with a great shout, that the wall fell down flat” (Joshua 6 v. 20).

Archaeological evidence suggests that the city has been destroyed, abandoned and recolonised several times in its history although the dates are vague and direct evidence linking it to an individual earthquake is absent.

That said, the city’s ancient location — in the fault zone and, indeed, right on one of the zone’s many faults — suggests that earthquake intervention at some stage in its past is a definite possibility.

Destruction of Sodom and Gomorrah

The location of the cities of Sodom and Gomorrah, unlike that of Jericho, is uncertain although Robert Yeats cites archaeological evidence which suggests that they, along with others, may have existed in areas now too dry to support settlement. This time, although are no definite locations for the story, there is archaeological evidence for major earthquakes in the region in the late Bronze Age, along with extensive salt deposits which tie in with the awful fate of Lot’s wife – turned to a pillar of salt for looking back.

Forces of Earth in Biblical Lands

In the past the Biblical lands have wrestled with the forces of the Earth and they continue to do so. And one thing is clear; whether the interventions which “overthrew those cities and all the plain” came from God or from the grinding of the Earth’s tectonic plates, the forces which have shaped the landscape – and the history – of the region are greater than those of humans who inhabit it.