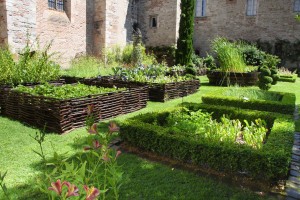 Medieval monks had herb and flower gardens like this one in an old abbey in France. Gardens provided medicinal herbs, food, and flowers for the altar. Image by Sternsunden.

Monks grew their own food, and often farmed extensive land. Although the basic practices of the Benedictine order and its Cistercian offshoot often overlapped, the differences between these two religious communities meant differing contributions to the economy of Europe and particularly Britain.

Depending on their size, monasteries had several types of gardens. There was always a cloister garth, a square garden at the heart of the monastery surrounded by cloisters, long passages along which monks could walk or where they might sit to meditate or read.

A sacristan’s garden produced flowers for the altar. Sometimes this was the same garden as the paradise, which was at the altar end of the monastery church and intended to be a place of beauty that reminded the viewers of the Garden of Eden, lost to humans. There would also be a vegetable garden and sometimes an herbalist’s area in which the monks grew medicinal herbs.

Both the Benedictines and its Cistercians gardened and farmed, but the emphasis was different: the Benedictines were gardeners who did some farming; the Cistercians were farmers who gardened. The locations of the different monasteries, as chosen by the two orders, affected what their economic activities would be.

From early times, the Benedictines nurtured the land of Europe that had been wasted by Roman latifundism, a practice in which Roman businesses bought up estates and exploited them to exhaustion for maximum profit. The repair of damaged land is a job for a gardener, one who carefully nurtures the soil, often in a small area, until it comes to fertility again.

The Benedictines started off as gardeners who operated in the enclosed hortus (garden) of their small monasteries. A classic example of this is Strabo’s garden on the island of Reichenau, which Abbot Strabo celebrated in his famous book Hortulus, (The Little Garden). This was a tiny plot growing herbs for healing, flowers for the altar, and food for eating.

The Benedictines developed farms as their monasteries grew in size through endowments of money and land from wealthy and powerful people. Certain areas of Britain, such as Pershore, in Worcestershire, Western England, had abbeys that grew vast fruit orchards, as this is England’s greatest fruit growing area.

Originally the Benedictine order was vegetarian, and so livestock was not kept. As the order spread into northern Europe, it became more convenient to eat meat, so some meat was added to their diet, though they never became great meat consumers. Cereals, vegetables and fish – often carp, which were reared in special ponds – remained important elements in the diet.

Monks did not reject alcohol and there were several monastic recipes for brews. One which fell out of favour in England due to the Reformation was cyser. This was a hybrid between honey and apple juice, a cider-mead cross, and was a monastic favourite. Another was braggot,  which was made with grain and honey and was thus an ale-mead cross. Monks often brewed ale/beer, which was a monastic staple.

Beer brewing by English monks ended with King Henry VIII and the Reformation; however, in 2012 Ampleforth Abbey in Yorkshire became the first to resume the practice. Sales of their product, Ampleforth Abbey Beer, help support the monastic community.

This would be a pleasant peaceful place to spend an afternoon. You can see the cloister garth at the centre of the picture. Image by Elena the Wise.

The Cistercians branched off the Benedictine order in 1143. Under Saint Bernard’s influence, the order developed rapidly and soon absorbed the Savignac order, which followed a similar rule of strict observance and penance. The Cistercians distanced themselves from society and sought lonely places to locate their monasteries. Ideally the Cistercians accepted undeveloped land, often in remote places. If they took developed land, they moved the serfs elsewhere.

The Cistercian foundation of Citeaux, from which they receive their name, was in a wilderness area. Such areas were more suitable for farming than gardening. In England, foundations such as Tintern, in the Welsh borders, Fountains, and Jervaulx in Yorkshire, were in less populated lands with poorer soils. In areas such as these, arable agriculture was less profitable than pastoral work. Cistercians took to sheep farming, contributing to the growth of an already important economic activity in Britain.

The ruins of Melrose Abbey leave few clues about the gardening activities of the monks who lived here. One can imagine a quiet cloister lush with growth. Image by Michael Palis

Cistercian life was a combination of prayer and hard physical labour, which led them to work on farms. Sheep farming is not intensive, as gardening is, and this meant that they needed extensive lands. The result of this was the development of granges. These were outlying farmsteads manned by monks, who tended sheep there.

The Legacy of the Cistercians

Many places in modern-day England have the word grange as part of their name. These are all places that were once in Cistercian possession before the Reformation. It was through the impact of the Cistercians that some lands that had once been waste or underdeveloped turned into more economically and agriculturally profitable land.

Some Cistercian products are still with us. The warden pear was developed by Cistercian plant breeders in Bedfordshire in Eastern England, which also had a vineyard. We also enjoy Wensleydale cheese; originally made from ewe’s milk, the cheese has been made with cow’s milk since the fifteenth century. When Henry VIII destroyed the monasteries, the departing monks left the recipe with the locals, who still make the cheese at the Wensleydale creamery.

This was the land, worked into productive farms by the Cistercian order of monks, was ripe for Henry the Eighth to plunder. Many of the monasteries are now gone, especially in England, but the lands of Europe were improved by their efforts, and this is no insignificant part of their legacy.