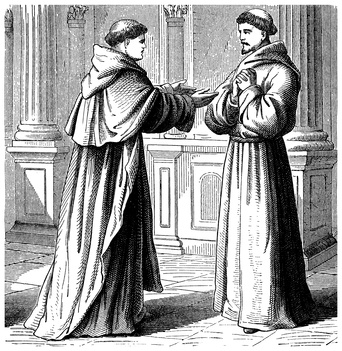 A Dominican and Franciscan Friar meet, and two views of the purpose of the Incarnation are likely to have clashed here. Copyright image courtesy of Erica Guilane-Nachez, used with permission. All rights reserved.

A common sight in the nineteenth century was a child wearing a dunce’s cap. Now extinct, this was an abuse of children and an insult to one of Britain’s greatest thinkers.

John Duns Scotus, termed the Subtle Doctor on account of the complexity of his arguments, was one of the leading thinkers of the Middle Ages, but his popularity waned at the Reformation and Scotism fell out of favour with all but his fellow Franciscans.

Who Was Duns Scotus?

Historians contest his birthplace. Most scholars believe that he was from Duns, near Edinburgh, but Duns could have been just a surname. There are claims that he was Irish, but these claimants probably are confusing him with John Scotus Eriugena, who lived several centuries earlier.

Born in 1266, he was ordained a Franciscan priest at Northampton in 1291. Scotus spent the years between 1288 and 1301 in Oxford, until he sojourned briefly in Paris, before being deported for siding with the Franciscans in a dispute with the French king.

However, he was back in Paris, teaching at the university in 1304, before being posted to Cologne in 1307, where he died a year later. But in his brief life he brought the Franciscan spirit into theology, which is the richer for it.

Much of Scotus’ work was philosophical, but his theological insight into the incarnation, the central doctrine of orthodox Christianity, is of great significance. The incarnation is the belief that God became human in Jesus Christ, but many religious thinkers pondered why this was necessary.

The standard answer came from St Augustine, who argued that the incarnation was God’s response to the Fall of Adam. All humans shared in Adam’s sin, original sin, and so were liable to damnation. But God in his mercy sent Christ to pay the price of sin by dying on the cross and in so doing, saved some humans.

In the eleventh century Anselm, writing in Cur Deus Homo, [Why God Man] argued that sin had insulted God’s honour, and as he was infinite, sin is an insult of infinite gravity that finite man could not pay, so while man had to pay, only God could pay the price. God became man in Christ to pay to the price of sin.

This theory makes sin prior over God’s love. It can find no connection between the creation of the world and the incarnation, and thus it leaves theology disjointed. 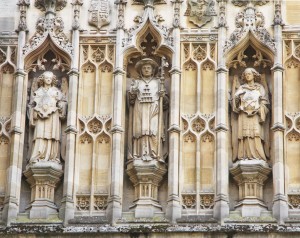 In Scotus’ view the above-mentioned thinkers have it wrong. As a follower of Francis of Assisi he emphasised love. Sin is not primary, but love is. God’s love for humans is present from the creation of the world, and is part of the plan of creation. Scotus’ key principle was the primacy of  Christ in creation.

Now here is Duns Scotus’ great insight: rather than just being a contingency plan to pay for sins, the incarnation of God in Christ was in the plan of creation from the beginning. Jesus Christ is therefore not an intrusion from outside, but “Our Elder Brother,” God’s masterpiece.

“I am the alpha and the omega, the beginning and the end, the first and the last,” says Christ in Revelations 22:13, and in one deft theological move Scotus shows why this is so. He shows the Franciscan insight that Christ is the centre and the axis of creation, a point that his fellow Franciscan Bonaventure later developed.

Scotus proceeds to explain the cross. Jesus did not come to die, but came as an elder brother visiting his family. But like any relative who arrived to find that there are problems, he proceeds to sort them out when he comes. So Scotus did believe that Jesus paid the price of sin by dying on the cross, but this was not the purpose of the incarnation, but what the incarnate Christ did for humans in the situation in which he was incarnated.

He tied his views on the incarnation in with his belief in the doctrine of the Immaculate Conception. While many confuse this with the belief that Jesus was born of a virgin, it is the belief that Mary, Jesus’ mother, was by God’s grace conceived free of Adam’s sin that afflicts all humans. This was to make her a fitting receptacle for the Incarnate Son of God. This belief became a doctrine of the Roman Catholic Church in 1854.

Why Was Scotus Unpopular With The Reformers?

Protestantism is very much based on Augustinian views, and tends to see sin as primary. Hence it is of the sin-centred theology that Scotus rejected. So in Reformation Europe, Scotists found themselves out on a limb.

They rejected the new learning and so became seen as regressive; people who could not learn. So at Oxford someone coined the offensive nickname dunce. Scotism faded away in England. 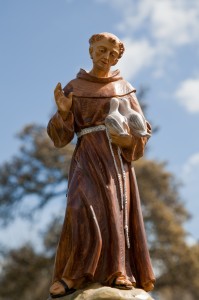 The Significance of Scotus

As the doctrine of the Incarnation is what distinguishes orthodox Christianity from other faiths, it is important that what Christians believe about this doctrine is correct. The Scotist doctrine presents a view of the Incarnation that links it to creation and to the love of God, whereas other theories do not do this adequately.

Thus, through the  Scotist view, Duns’ disciples understand this central doctrine more thoroughly and in a way that does justice to the love of God. It is far more more consistent with a loving deity than any view focused on divine punishment  is.

The Scotist view therefore is an asset to the Christian faith that Christians need to promote as fully as they can.