Today, we know Descartes as “the Founding Father of Philosophy.” Photo courtesy of André Hatala, image by Dedden.

René Descartes (1596-1650) was a worldly and well-travelled philosopher, mathematician and scientist, who gained experience by joining the army and going to war.

Descartes believed that knowledge could only be achieved through reason. Neither books nor our senses could be trusted, according to this philospher. In this, he was in agreement with the great Greek philosopher Plato, who lived from 427BC to 347BC. We know Descartes as “The Founding Father of Philosophy” – a huge accolade for a man who died when he was only 54.

Descartes’ belief in the certainty of mathematics encouraged him to explore whether the same logical deductive methods used in mathematics could apply to philosophy. He was skeptical to begin with, questioning whether he was actually sitting by the fire, or merely dreaming he was sitting by the fire. Bertrand Russell, in his History of Western Philosophy, sums up Descartes’ reasoning: “I may have no body; this might be an illusion. But thought is different.”

In Sophie’s World, Jostein Gaardner explains that there was also a “…need to assemble contemporary thought into one coherent philosophical system.” He adds: “The first significant system-builder was Descartes, and he was followed by Spinoza and Leibniz, Locke and Berkeley, Hume and Kant.”

In his two books, Discourse on Method, and Meditations, Descartes explained his method of Cartesian doubt.

Descartes decided he had to doubt everything, proceeding from zero towards what he knew, to be certain. He figured that the first certain thing was that he doubted. In order to doubt, he must be thinking. Therefore, he was a thinking being. 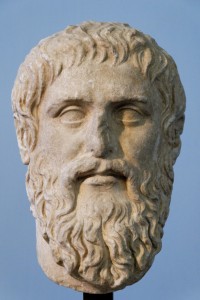 This marble bust of Plato is a copy of the portrait made by Silanion ca. 370 BC for the Academia in Athens. Photo by Marie-Lan Nguyen

Descartes proved to himself the existence of God by perceiving that he, himself, was an imperfect being who had the idea of a perfect entity. That idea, he claimed, could not come from a being that was himself imperfect. Therefore, its origin lay with the actual perfect being, in other words, God.

How could an entity be perfect if it did not exist? “The more self-evident a thing is to one’s reason, the more certain it is that it exists,”  says Gaardner. Both Plato and his teacher, Socrates, would have agreed with Descartes on this point.

In her Metaphysics as a Guide to Morals, Iris Murdoch summarises Descartes’ thought process as follows:

Yet, Murdoch explains, this is a partly circular argument. “I could not possibly be as I am and yet have the idea of God if God did not exist.”

Bertrand Russell describes Descartes’ proofs of God’s existence as “not very original.” Russell even goes so far as to dispense with them altogether. He says: “…in the main they come from scholastic philosophy. They were better stated by Leibniz and I will omit consideration of them until I come to him.”

What did Russell mean by ‘scholastic philosophy?’ This term simply means the theological and philosophical beliefs of the Middle Ages as proscribed by the church fathers. In other words, traditional doctrines or methods.

Descartes went on to make a division between two types of reality: That of thought and that of matter. Thought has consciousness, but matter does not. Both substances, Descartes believed, came from God, but were independent of each other. This makes Descartes a duallist. He did, however, believe that these two distinct substances interacted.

Animals, said Descartes, were part of matter and were merely automatons, while man had a body like the animals and a soul like the angels.

Bertrand Russell praises Descartes’ grasp of the then new physics and astronomy, and says: “There is a freshness about his work that is not to be found in any previous philosopher since Plato… It is very fortunate for modern philosophy that the pioneer had such admirable literary sense.”

Not only was Descartes the Father of Philosphy, he was also a mathematician. One of his great contributions to mathematics was his invention of analytical geometry. His major works were: Discourse of Method, 1637, Meditation on First Philosophy, 1642 and Principles of Philosophy, 1644.