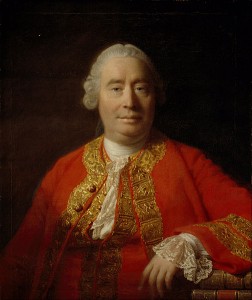 Shown here is a beautiful painting of David Hume (1711-1776) by Allan Ramsey, in the Scottish National Gallery. Image courtesy of Dcoetzee.

As a child prodigy, David Hume entered University at the tender age of eleven years; and after graduation, began to follow the theories of John Locke.

His good-natured humour reaches out to us from beyond the grave. According to Jeremy Harwood in Philosophy, 100 Great Thinkers, Hume wrote his first and chief philosophical work A Treatise on Human Nature in France in the mid-1730s and published it when he was 28 years old, noting that “…it fell dead-born from the press.”

He continues: “But, being naturally of a cheerful and sanguine temper, I very soon recovered from the blow.”

Later, he shortened his Treatise and it became well-known as Inquiry into Human Understanding, famous for awakening Immanuel Kant from his “dogmatic slumbers.” (It was Kant who attempted to reconcile the opposing viewpoints of empiricism and rationalism.)

David Hume is an empiricist. In other words, he believes knowledge comes from experience.  He is an extraordinarily independent and original thinker and ahead of his time.

Hume believes that knowledge not gained through experience is false and we must ignore it. Humans cannot know anything for certain except that which we prove empirically. Jeremy Harwood explains Hume insists that we cannot claim the existence of any “thing” unless we can provide evidence for that existence through observational experience. If there is no observational experience – as with the existence of God – then the thing cannot be proved to exist.

Modern-day atheist Richard Dawkins says, in The God Delusion, “A deep understanding of Darwinism teaches us to be wary of the easy assumption that design is the only alternative to chance… Before Darwin, philosophers such as Hume understood that the improbability of life did not mean it had been designed, but they couldn’t imagine the alternative.” 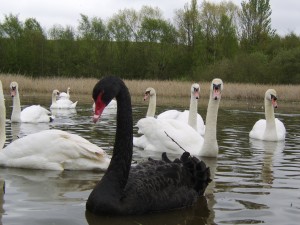 Swans can be black, or white. Image by MichaelJohn.

Mitigated Scepticism – We Cannot be Sure of Anything

This same argument supports Hume’s scepticism about “cause and effect.” He says since cause and effect cannot be observed, the belief in it is unreliable.

Causation is the theory that when one thing happens, another thing follows as a result; this theory is described in philosophy as “inductive reasoning.”  Hume uses the white swan/black swan example.  People who have only ever seen white swans would not expect to see a black swan.  Being a swan doesn’t necessarily cause a bird to display snow-white feathers.

“Logically,” says Harwood, “no matter how many times something is observed, there is always the possibility that next time something different will occur.”

Hume accepts that it is sometimes permissible to assume connections between things, yet feel aware that it is impossible to prove them, but says we should reject any theory that isn’t founded on fact and observation, and take a pragmatic approach.  Jostein Gaardner in Sophie’s World, suggests one example of how humans make unreliable connections, and this is the idea of an angel which is a human figure with wings. We have all seen humans and we have all seen wings. Therefore, an angel is a complex idea derived from two different experiences that are not actually related. 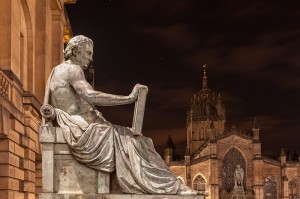 Here is a statue of Hume by Alexander Stoddart, in the Royal Mile, Edinburgh. Image courtesy of Bandan.

Jeremy Harwood quotes Hume, endearingly, as saying: “I have written about all sorts of subjects… yet I have no enemies except indeed all the Whigs all the Tories and all the Christians.” That seems a fair assumption of cause and effect on the great philosopher’s part! If David Hume was alive today, he would probably have a good retort to that observation.

Hume and the Self

Hume repudiates the idea of the self and banishes it from psychology. Bertrand Russell quotes the philosopher: “There is no impression of self and therefore no idea of self. For my part, when I enter most intimately into what I call myself, I always stumble on some particular perception or other, of heat or cold, light or shade, love or hatred, pain or pleasure. I never catch myself at any time without a perception and never observe anything but the perception.”

From this, Hume assumes we are all comprised of a collection of various perceptions, following one another in our heads in rapid perpetuity.

Hume and the Enduring Issue of Inductive Reasoning

Philosophers continue to debate his thinking in the present day; but so far, says Harwood, “… the basic concerns he raised – notably the whole issue of inductive reasoning are as yet unresolved.”