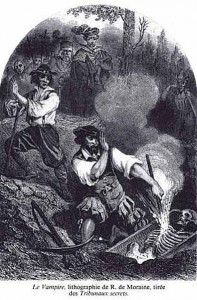 Was the Coglin Grange vampire have been based on pulp fiction, or historical fact? Lithograph by R. de Moraine (1864)

As the story goes, Croglin Grange in Cumberland, England, was a one-story stone dwelling on a hill near a primeval churchyard and church. According to legend, the Fisher family owned it for centuries; then in the 1800s, the Fishers moved into a larger home and rented the property. In the spring, siblings Edward, Michael and Amelia Cranswell leased the dwelling. Was this the beginning of a vampire story or a pulp-fiction hoax?

According to the legend, the first encounter came when the weather was hot. Amelia didn’t feel well, so she went to bed early, and closed the window. As she looked out of the window, Amelia saw what looked like two small lights in the churchyard, which moved from the graveyard, went over the wall and approached the house. Amelia felt anxious, bolted her bedroom door, ensured that the window was securely locked, then went to bed to try to sleep.

As the story goes, Amelia heard rustling by her window and scratching at its pane; then she saw a shriveled brown face and glowing eyes. The creature removed a pane, then unlocked the window – then stalked toward her, then bit her throat. Amelia shrieked, and her brothers rushed to her room; they had to break the locked door open with a poker. One brother tended to Amelia while the other went to the window and saw something race toward the churchyard, then disappear over a wall.

Someone sent for a doctor, who told them that they should take a vacation after her wound healed. The trio went to Switzerland. After Amelia recuperated, legend tells us, they returned to the Grange. Upon their return, the creature repeated the visit. The brothers investigated the churchyard, and found a hideous creature in a coffin, which they burned until only ashes remained.

Where did the story of the Croglin Grange vampire originate? Clergyman, writer and storyteller Dr. Augustus Hare included the event in his book, Story of My Life, published in 1875, saying he heard it from a Captain Fisher. According to another source, however, the book’s name is Memorials of a Quiet Life and was published in 1871. The accounts are the same, but with varying sources; a little like memes that circulate on Facebook today.  Controversy and investigations ensued.

Journalist and writer Lionel Fanthorpe recently researched the vampire stories and theorizes that some events happened in the 1600s. In Oliver Cromwell’s era, someone demolished a vault close to the Grange.

Is it possible that Varney’s anonymous author and either Fisher or Harper knew bits of history about the vaults and decided use them as bases for their horror stories? Either way, the locals don’t consider Croglin Grange chicanery – they view it as folklore.

Guiley, Rosemary Ellen. The Encyclopedia of Vampires, Werewolves, and Other Monsters. (2005). Checkmark Books.