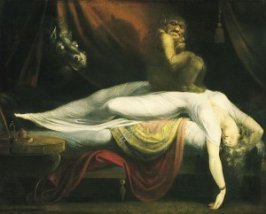 Old Hag terrorizes a supine victim in Henry Fuseli’s 1781 oil painting, “The Nightmare,” which some people believe is a classic depiction of sleep paralysis viewed as a demonic attack. Painting by Henry Fuseli. Image courtesy of Paris 16.

The phenomenon of sleep paralysis termed “Old Hag,” known in ancient times and throughout history, is a subject of folklore, theories and mystery.

Electroencephalography’s invention in the 1950s paved the way for sleep pattern research and investigating sleep paralysis which has many similarities to the ancient malady.

Both usually happen when people sleep in a supine position and feel paralyzed, unable to move or speak, when they awaken. Some scientists have proposed this condition as an explanation for alien abductions and paranormal encounters as well as Old Hag Syndrome.

According to Rosemary Ellen Guiley’s book, Vampires, Werewolves and Other Monsters, people blamed vampires, agitated ghosts, demons and witches for Old Hag Syndrome. Some folklore has it that hags are paranormal creatures that directly attack victims or assault them through magick.

According to other lore, witches, sorcerers and magicians travel out of their bodies to ride on the victims’ chests at night or while napping in the day, and recorded cases of Old Hag Syndrome appear throughout history.

Guiley, citing David Hufford’s book, The Terror that Comes in the Night, wrote that he “estimates that about 15 percent of the general population worldwide suffer at least on attack during life.”

In this example, a miller had a strong servant boy, who began to fail shortly after being hired. He ate heartily, but became weak and gaunt. The boy said something that he couldn’t see sat on his chest and sucked his breath. He became paralyzed, unable to move or talk, every night around midnight.

The miller agreed to share the boy’s bed and made him promise that he would give a sign when the creature arrived. When the boy gave the signal, the miller grabbed the invisible thing that perched on the boy’s chest. The man said it was elliptical and felt “like gelatine.”  The creature squirmed and violently fought to escape, but the miller held it tightly and threw it into the fire. This ended the attacks and the boy recovered.

Guiley wrote that, in 1931, Freudian psychoanalyst Ernest Jones paralleled Old Hag Syndrome to nightmares, which he attributed to sexual repression. He averred that the word, “nightmare,” derives from the Anglo/Saxon nicht, night, and mara, incubus or succubus, the “crusher.” A incubus was a male demon that seduced women at night; a succubus seduced men.

David Hufford wrote about this malady in his The Terror that Comes in the Night . He began his research about the phenomenon when he was a member of the faculty in the Folklore Department of Memorial University of Newfoundland. He’s a Professor of Medical Humanities and has joint appointments in Behavioral Science and Family Medicine, at the Penn State College of Medicine.

Old Hag experients report many of the same phenomena that those with sleep paralysis do. They also report hearing footsteps before the attack, seeing monstrous shapes, hearing rasping breathing and/or smelling repulsive odors.

According to Rosemary Ellen Guiley in her book, The Encyclopedia of Ghosts and Spirits, the ancient Greek doctor Galen attributed Old Hag to indigestion in the second century.

Old Hag Syndrome is also called Night Hag and some, mistakenly, call it the Night Terrors. Children can suffer from Sleep Paralysis, which isn’t the same as the Night Terrors, which includes nightmares and is most common among children aged 3-6 years. This is the age when normal fears develop, and a child’s imagination is extremely active. The child might dream about danger or a scary situation, which could involve distressing themes, such as images or creatures including monsters, ghosts, animals or dreadful people.

What is Sleep Paralysis?

According to Dr. Jennifer Robinson’s WebMD article, “Sleep Paralysis,” over the centuries, people have described symptoms of this disorder in many ways and frequently attributed them to feeling an evil unseen presence. Nearly every society had stories of evil creatures that terrified vulnerable people at night.

This sleep disorder involves a feeling of being conscious but not able to move and happens when people are between wakefulness and sleeping. During these changes, people may not be able to move or speak for a few seconds or a few minutes, which might be accompanies with feeling pressure or a sense of choking.

Stages of sleep vary between REM (rapid eye movement) and NREM (non-rapid eye movement) sleep. When people wake up before the REM cycle has finished, they might notice that they can’t move or speak. Color it black for the terror they feel and the mystery that this sleep disorder still is.

Robinson wrote that as many as 40% of people might develop sleep paralysis, which usually happens when they are teens, but it can occur at any age. Sleep paralysis can also run in families. Factors can include sleep deprivation, changes in the circadian cycle, stress, psychiatric disorders – such as depression, sleeping in a supine position, other sleep disorders, such as insomnia, leg cramps, some medications and substance abuse.

According to Hufford, Guiley and Robinson, there are many similarities between the sleep paralysis and Old Hag Syndrome. Each has theoretical causes. Questions arise. Is the cause of these phenomenon physical, psychiatric, paranormal, or a mix thereof? Could it vary from person to person? Could the cause be more than one factor? The theories have evidence to support them; however, there is no proof according to the scientific method. We need more research to answer these questions.

© Copyright 2016 Jill Stefko, All rights Reserved. Written For: Decoded Past

Guiley, Rosemary Ellen. The Encyclopedia of Ghosts and Spirits. (1992). Facts on File.

Hufford, David. The Terror that Comes in the Night. (1982). University of Pennsylvania Press.