Adam and Eve committing the first sin. Note that it is a joint act and both are seen as equally blameworthy. Picture courtesy of Jorisvo

While we are familiar with the story of Adam and Eve, there are other thinkers who had their own take on this difficult area, and these people deserve serious consideration. They include Irenaeus, bishop of Lyons, in whose view humans were going through a soul making process; Origen, for whom humans were caught in a cyclic world in which spirits ascended or descended the levels of being; John Cassian and Pelagius, for whom original sin was socially transmitted.

Jesus never mentioned original sin, but the church has made much of it, making it the rationale for  infant baptism, for it saved those doomed to the Limbo of innocents, or in Augustine’s view to Hell.

The roots of the doctrine of original sin lie in a sense of inadequacy and weakness. The Christian moral life is demanding, and we struggle to live up to it, even when we beseech God for help. We feel that there is some flaw in our human nature which renders us susceptible to temptation. But why did God build in this flaw? Why did he not make us perfect?

Christianity has had to come up with a theory to explain this flaw. From early times, the blame lay on Adam and Eve. Note that Christianity never blamed only the woman, as some think. But here is a difference in terminology: The West speaks of original sin, whereas the East speaks of ancestral sin.

The first theologian after the New Testament to really address the issue was Irenaeus [c125-202 A.D.] In conflict with the Gnostics, who were in his view inordinately confident in human powers to do good, Irenaeus claimed that Adam had sinned and had taken a kind of wrong step, misdirecting his descendants.

Prior to Adam’s fall, humans had the image and similitude of God. The image, which they retained after sin, was the basic personhood, intelligence and freewill, but similitude was the higher image, immortality, which had to be restored by Christ. All men were in some sense in their ancestor Adam, but  all are able to be in Christ, the second Adam, through baptism.

But this is of critical importance. Irenaeus did not believe that after original sin humans were lost in total depravity, as later Calvinists were to believe. They still retained freewill as part of the divine image inherent in them. However, they were prone to death as the consequences of sin.

For Irenaeus, Adam’s sin was due to his being yet a child, so in this theory Adam did not sin as a full adult. He inherited a world which was in later parlance, the vale of soul making. It was a place in which humans could grow to maturity through their free decisions in co-operation with God. Thus evil is taken up and used by God as a stimulus for moral growth. 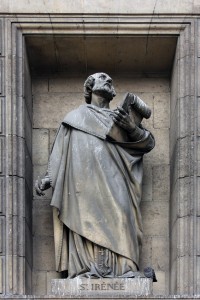 This is a statue of St Irenaeus, a moderate and wise thinker who saw human progress as spiritual development. Picture courtesy of Zatletic

Origen linked his views of original sin to his orphic world-view. For Origen, there were layers of being, the higher realms being inhabited by angels and the lower ranks by humans and animals, below which were demons. In Origen’s view, certain spirits fell from the higher levels by the desire for pleasure, and depending upon how much they fell they inhabited bodies.

Some bodies were more sin-prone than others, as their inhabitants were spirits with a greater desire for pleasure. This gave a kind of original sin. However, Origen  recognized that the sin of Adam contributed to the weakness of human nature.

However, the problem is that Origen was committed to a deeper reading of Scripture than the mere literal, and so while he speaks of Adam and Eve it is uncertain what he precisely believed on this matter. Sometimes he seems to take Adam and Eve literally, while at others he does not. But for Origen, humans were free agents and so were responsible for their own sins, so the idea of an inherited sin fitted not all into his theology.

But there is a deeper dimension in Origen’s thought: reincarnation. He states that each soul ” …. comes into the world strengthened by its victories and weakened by its defeats in its previous life. ”  We do not only inherit our weakness from Adam, but from ourselves in previous lives.

This is a view completely opposed to the Augustinian theory of sin inherited from Adam.

Everyone did not accept Origen’s high view of human freedom. An example of this attitude was Augustine. A convert from Manichaeism, which saw human nature as fundamentally corrupt, Augustine entered Christianity with a record of sexual corruption behind him.

Christianity regards baptism as the remission of all sins, so his slate was wiped clean, but the consequences of a lifestyle that he bitterly rued remained with him. He regarded human nature as sinful and attributed this sin to the first ancestors, who passed down hereditary sin. Humans were therefore in a state of total depravity and, according to Augustine, were condemned to Hell unless they were baptized, even unbaptized children.

Pelagius, Augustine’s most committed opponent, held the view that human nature was essentially good  and that sin was a personal act that could not be passed down in any way. Furthermore, Adam’s problem was that he set the pattern for sin. In other words  Adam set us all a bad example. For Pelagius, original sin was therefore socially transmitted. In Pelagius’ view sin is an act of human freedom, and humans at all times remain free to make moral choices. As sin only comes about through moral choice, it cannot be passed down from one’s ancestors.

After several local councils, Augustine managed to get the emperor Honorius on his side, and he pressurized Pope Zozimus to condemn Pelagius, in an act of imperial interference in Church matters. As a result Augustine’s view prevailed. 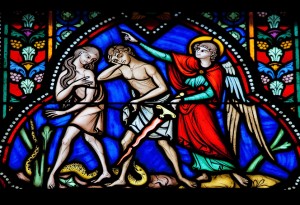 The expulsion from Paradise and the beginning of the travails of humanity. Picture courtesy of Jorisvo.

The East was not as anti-Pelagius  as the West. John Cassian [360-435 AD] argued for a position intermediate between Augustine and Pelagius. This semi-view rejected total depravity and Augustine’s belief in predestination. Cassian argued that while Adam’s sin was severe, it did not obviate freedom, and therefore freedom and grace ran together in parallel.

Augustine won – not by strength of argument, but by political scheming. The man who said that the words of the bishop of Rome were decisive was happy for the pope to be pressurized by Honorius and Theodosius, the joint emperors.

Augustine’s respect for authority was conditional on its being on his side. The Augustinian case succeeded by default. After the collapse of the West, not only were Augustine’s works the main survivors out of the vast corpus of Christian literature, but they were in Latin and therefore readable by a clergy who did not read in Greek. Augustine’s theories have therefore influenced western Christianity disproportionately in relation to the works of other thinkers.