Christmas Carriage Ride as seen on the route of the Ghost Tours. Copyright image courtesy of Phil Carlson 2015, used with permission.

In 1937, the Bethlehem Pennsylvania Chamber of Commerce started a letter writing campaign to 2,500 other chambers in the United States to ask them to request their local newspapers and residents to designate Bethlehem as the official Christmas City, according to bnewsinsider’s “75 Years of Being the Christmas City: Bethlehem, Pa.”

The Moravians, a Protestant religious church, founded the city on Christmas Eve 1741.

People sent their Christmas cards to Bethlehem’s post office where the staff hand-cancelled envelopes with a seal with the words “Christmas City.” Later, the post office created special stamps for people to paste on their envelopes. In addition to the stamps, people can buy Christmas balls and other items with “Bethlehem, Pennsylvania, the Christmas City.”

In October 1998 and 1999, the now-defunct Bethlehem Tourism Authority (BTA) and I held walking ghost tours, entitled Haunted Bethlehem, in the historic area. The BTA’s headquarters was in the former Visitor’s Center. I wrote the scripts and served as hostess and expert about ghostly phenomena.

Color the haunters and history white, the shade of the Christmas lights in the Moravians’ historic area. The city swathes the trees in white lights and the electric candles in residents’ windows have white lights. White is the color of spirit, especially during Christmastide. Let’s return to the yesteryears of 1998 and 1999. Due to requests for confidentiality, I haven’t provided some names and exact locations – and I also used pseudonyms.

According to Richmond F. Myers’ book, Sketches of Early Bethlehem, Brother Albrecht’s ghost haunts the Sun Inn. The Moravians built tunnels that ran from the east bank of the Monocacy Creek to buildings in what is now considered the historic area, including the Sun Inn’s cellar, in case of hostile AmerIndian attacks.

There’s a legend that Brother Albrecht hid records and valuables in the room. His ghost, allegedly, guards the treasure. Experients have felt cold spots, breezes and a presence in the cellar.

Hotel Bethlehem has three known ghostly residents, May Yohe, Francis “Daddy” Thomas and Mrs. Brong, according to “Rooms with a Boo.” The ninth floor is the most haunted. People have recorded ghostly voices, experienced shower water malfunctioning when there’s no scientific explanation and have seen the ghost of an unknown man. There are cold spots and breezes on the third floor even when the staff seals the windows for winter.

Color them white, the hue of the Christmastide decorations that adorn the historic buildings and the trees outside of them.

The Brethren House served as a hospital during the Revolutionary War and people claim that they saw the ghost of a contemporary nurse peering out of a window. 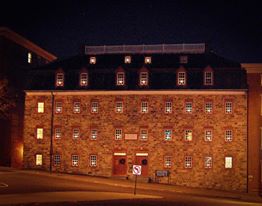 Neville Gardner, who owns Donegal Square, told me that there is poltergeist activity in the building, including faucets that turn on by themselves. His store is on the site of the house where Lafayette stayed when he was recovering from battle wounds. According to legend, his caretaker’s daughter fell in love with Lafayette and was heartbroken when he returned to France.

My parents’ historic High Street first floor apartment was haunted. Mother had ghostly encounters. Before each incident, the room became chilled; she felt uneasy. She saw ghosts of a family of four, a man in jockey shorts and a woman in a wrap-around skirt. She felt something creeping up on her bed and heard strange moaning sounds.

My son, Teddy, and I experienced paranormal phenomena in our second and third floor historic Market Street apartment. Poltergeist activity included objects disappearing, then reappearing, sounds of phantom rodent’s claws heard in the ceilings, louvered closet doors damaged when no one was home, whimpering heard in the “coopy hole,” and Teddy feeling something watched him through his bedroom’s transom.

Color them white, the colors of the electric candle’s bulb and Christmas Eve snow.

A Miscellany in Bethlehem

The former Visitors’ Center was previously a nightclub called the Colonnade, where a handy man found a woman’s body at the foot of the stairs in November 1949. Although the District Attorney said it was an accident, people believed that she was murdered and there was a cover up. The BTA’s staff wouldn’t stay alone in the cellar after dark. People experienced poltergeist activity, saw a misty form and sensed an unseen presence.

Sheila and Tom Thorndyke, owners of a Westside Bethlehem home said the third floor lights turned on by themselves, they heard phantom footsteps on the stairs, something played with their toddler’s toys and their cat was afraid of something in the vestibule. One day when Sheila opened the door to a closet, she was stunned. There was a white-washed painting of an evergreen tree on the left wall that wasn’t there the day before. They sensed a man’s presence and experienced poltergeist activity and saw apparitions.

Before my parents moved to High Street, our family lived in a Main Street ranch-style house built in 1954. The play room had a fireplace, wet bar, shuffleboard court, laundry room and a closet with a built-in aquarium. Teddy was alone in the playroom when he said he saw a “monster” in the furnace enclosure. One night, when he was in bed by the window, he saw something white and filmy flap in and out through the screen. After my parents sold the house, in 1973, I discovered my brother and cousin felt something was watching them in the playroom, as I did.

Color them white, the shade of the Light of Heaven and Spirit.

We entertained our guests with true stories about the “otherworldly Bethlehem” and provided a “real ghost,” Mr. Pepper’s. In 1998, I led a group on the walking part of the tour after I gave my “kick-off” talk, stopped at a darkened store front’s window, pointed to it and said, “It’s Mr. Pepper’s ghost!”

The group looked at the window and saw their reflections. The “ghost” is an illusion that charlatan mediums used in their heyday. They looked at me. I said, “You saw your reflections. Mr. Pepper’s ghost. Parapsychologists just wanna have fun.” They loved it.

We incorporated this in the 1999 tours. Before they began, a reporter asked me if people would see a ghost. Maybe he thought I was joshing him or that I was being bold, but Pepper’s “ghost” appeared on command.

Paint this white, the color of some people’s faces when they thought they would see a real ghost. 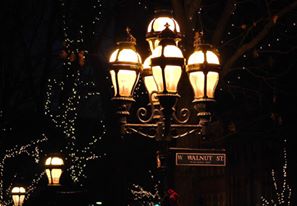 People began avoiding taking livestock to graze by the Lehigh River. They saw the ghost of a woman who drowned herself in the Lehigh. According to legend, Heckewelder confronted the ghost. He demanded to know why she was scaring his people. She told him that when she lived in the Old Country, her husband was cruel, so she drowned their baby to free him from abuse, then fled to Bethlehem before killing herself out of remorse. She was doomed to remain earthbound until it was her time to die. When Heckewelder told the townspeople, they no longer feared her. When her time came, no one noticed her absence.

Color her white because she was able to enter the Light, according to the legend.

Bethlehem, Pennsylvania, has many haunted places, although it’s better known as the Christmas City, Yuletide tours and for its history. People can take walking tours through the historic area, dine in excellent restaurants, shop in a haunted store, stay in a haunted hotel, visit the Sun Inn and attend various events in the city. If they are lucky enough to see a ghost, she or he might be white, the color of cartoon ghosts.