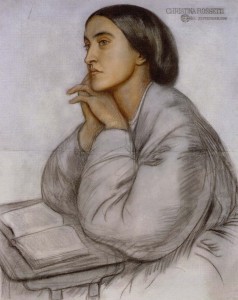 Christina Rossetti claims the poem Goblin Market is just a fairy story – but is it? Painting by Dante Gabriel Rossetti. Image by Chatabephop.

Christina Rossetti was born in London and educated by her mother. Sister of painter and poet Dante Gabriel Rossetti, who was two years her senior, she was fortunate in having a supportive family.

Rossetti’s randfather, impressed by her youthful promise, had collections of poetry printed for her when she was in her early teens; for example: To My Mother on the Anniversary of her Birth, April, 27, 1842.

The young Christina Rossetti was already deeply religious and her personal convictions had great influence in moulding her poetry. They also affected her love-life, causing the collapse of her engagement to pre-Raphaelite painter, James Collinson.

By the 1880s, after a period of ill-health, Christina Rossetti became an invalid, but continued to write, producing among many other well-known works, the long poem Goblin Market, published in 1862.

Critics have construed the poem in many diverse ways; for example, as a warning to young women not to trust strange men, or as a universal lesson to resist the temptations of the flesh. Mackenzie Bell says, in Christina Rossetti, a biographical and critical study, “I have more than once heard Christina aver that the poem has not any profound or ulterior meaning — it is just a fairy story…”

The conclusion drawn by Cora Kaplan in Sea Changes, Essays on Culture and Feminism is that the poem is a woman’s sexual fantasy, and contains elements of masochism, homoeroticism, rape and incest. However, the blurring of the images by use of metaphor, as well as their incompleteness, suggest undertones of repression in Rossetti’s psychology. It is particularly relevant when considering she was sexually uninitiated and inhibited by the sexual taboos that were endemic in Victorian times.

Sandra Gilbert and Susan Gubar, in “The Aesthetics of Renunciation,” The Madwoman in the Attic, point out the religious associations and see the poem as rife with Miltonian imagery: “Certainly, Eve, devouring the garden’s intellectual food, acts just like her descendant, Laura.” According to Gilbert, Eve’s ultimate goal is equality with, or superiority to, Adam. Likewise, Laura is: “…metaphorically eating words and enjoying the taste of power, just as Eve before her did.”

Cora Kaplan would not agree that the poem is a re-enactment of the story of Genesis, or that it is specifically about the fall of Eve. Kaplan explains there is a deliberate contrast between Rossetti’s poem and the myth of Eve’s succumbing to temptation in Eden: “While the snake’s apple produced sensations of shame in the Edenic couple, the goblins’ fruit gives Laura knowledge of desire but not shame.”

Goblin Market and the Alternative Possibilities

Gilbert and Gubar claim that Goblin Market depicts alternative possibilities for women, for Laura dares to be disobedient and indulges her sensuality, offering her (sexual) treasure in return for the “forbidden fruits.” Subsequently, Lizzie comes to the rescue, brave, loyal and loving, prepared to risk her own life in order to save her sister: “Life out of death, / That night long Lizzie watch’d by her, / Counted her pulse’s flagging stir, / Felt for her breath…”

Yet Lizzie’s sacrifice for her sister is passive. She does not fight the goblins but merely stands motionless and silent, allowing them to assault her before she goes home to her sister: “…able to offer herself as almost a sacramental meal.”

Gilbert and Gubar suggest various religious associations, for Lizzie saves Laura just as Christ saves Man; both are made pure and are welcomed to enter heaven — or marriage and motherhood in the case of the sisters. However, there is a sharp contrast between the message imparted by the Bible and that of the poem: Goblin Market, with its evil and mercantile little men and its innocent, high-minded women, suggests that men hurt while women redeem. Gilbert and Gubar point out the traditional nature of connections between female pleasure and female power, and between female sexuality and female speech.

Guilt in the Female Consciousness

They explain that society respected Victorian woman for her “blameless sexual life” especially since people of the era feared intellectuality in women because it was accompanied by the curse of uncontrollable sexual desires. “That genius and sexuality are diseases in women, diseases akin to madness, is implied in Goblin Market both by Laura’s illness and…by the story of Jeanie.”

Jeanie, who preceded Laura, became ill and died, having partaken of the goblins’ fare. Jeanie was cursed with death, her punishment for succumbing to temptation, a fate that would have destroyed Laura had Lizzie not redeemed her.

Finally, Gibert and Gubar describe the woman-poet as abandoned by her muse for failing to “…suffer and renounce the self-gratifications of art and sensuality.” This interpretation of Goblin Market presents guilt as an integral part of female consciousness, and only renunciation of artistic endeavour provides redemption, for at the end of the poem, Laura and Lizzie are both married and caring for their daughters.

It seems likely that Christina Rossetti, in her statement that the poem is merely a fairy tale, is either protecting herself or performing an act of displacement, forced upon her by her natural desires and the restrictions and limitations of her time.

Rossetti, Christina. To my Mother on the Anniversary of her Birth. (1842). G. Polidari’s.

Gilbert, Sandra, et al. The Aesthetics of Renunciation, The Madwoman in the Attic. (1979). Yale University Press.