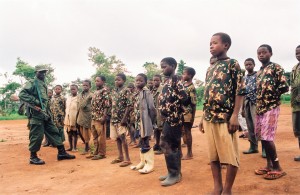 The use of child soldiers continues in over two dozen nations despite efforts to provide a global framework protecting children. Image courtesy of Amnesty International.

In December 2012, a journalist in North Lebanon asked fifteen-year-old Hussein what types of weapons he uses. “AK-47, AKMS, SKS, M16, M4,” Hussein replied. “I know how to use many types of guns. I know how to use G3, FAL, Seminov…I participate in all the battles.”

The boy told the reporter he would die as a martyr and wasn’t afraid to die. The Middle East Media Research Institute documented the interview.

On April 24, 2013, the German daily Bild featured a brief video filmed in North Waziristan depicting a small group of boys learning to fire various weapons. Some were orphans. All were ready to fight for al-Qaeda.

The English King Henry V has recently been labelled a war criminal for slaughtering prisoners at the 1415 battle of Agincourt. William Shakespeare’s play on the subject suggests that Henry reacted to the killing of boys – young men who stayed behind the lines guarding the baggage train. Contemporary British historians have suggested that this massacre of boys may be overstated, although young men, some as young as twelve, filled the ranks of the infantry. In fact, during the Middle Ages, people took it for granted that young boys would be a part of military action.

Boys were indispensable in wars. Over four hundred years later, as Britain forged an imperialist empire, its armies utilized drummer boys, “…a tough lot…soldier’s orphans and the like as young as ten years of age…they could hardly remember a life outside the barracks…” Writer Donald Morris’ detailed accounting of the tragedy at Isandhlwana (1879), which ended the first British attempt to invade Zululand, notes that age was no barrier to either side of the conflict.

If the few available sources can be trusted, the year 1212 was marked by several attempts on the part of charismatic youths to launch a Children’s Crusade. Recent scholarship questions the reliability of these sources and many general texts do not even mention this popular crusade. 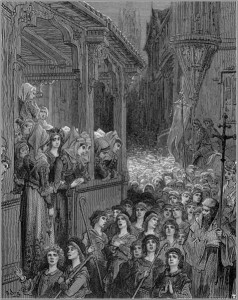 Children march toward southern Italy where the waves would part, allowing them to march to the East and free the holy places. Depiction by Gustave Dore 1832-1888.

The Economist, in December 21, 2000, however, published a brief account of the crusade, blaming a small group of leaders inspiring the others. The unidentified writer gave valid historical parallels: “Adolescents defended Berlin against the Russians in 1945, ships’ boys were long a feature of the British navy…”

If any part of the fanciful medieval stories is true, the child-crusaders were in several cases captured and sold as slaves, drowned at sea, or settled in areas like Genoa, Italy. What was the parental response?

According to the same dubious sources, the father of one of the leaders of the Children’s Crusade was hanged by angry parents. Some writers attempt to explain this crusade, referencing the folklore tale of the Pied Piper of Hamelin, but the legend is not traced to 1212 and there is no other evidence to support this analysis. 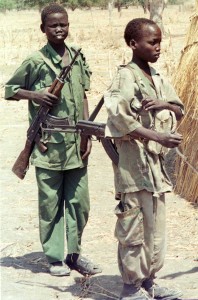 Children are often exploited by groups seeking power at the expense of human rights and self dignity. Addressing the growing epidemic of child soldiers must become a priority for nations involved in peace keeping and conflict resolution. Image courtesy of Amnesty International.

Historical Perceptions of Children and Conflict

A basic problem lies in the notion that the past can be explained by contemporary standards, at least those of industrial societies. Historians have referred to children in the Middle Ages, for example, as “little adults.” Jacques Le Goff, writing about social and cultural trends, comments that, “…childhood was not treated as a matter of serious concern…”

It can be argued that child soldiers were integral to the survival of a society, such as in the case of ancient Sparta. The Agoge, an exceptionally rigorous training center for males, created the warriors famed in the ancient world for their prowess.

The “rights of the child” are relatively contemporary. The current debate is fueled by societies that value children and hold deep sensibilities regarding childhood and youth. At the same time, Western societies accept military prep schools and summer camps that serve to turn young boys into military ready recruits.

The twenty-first century has not changed the perception of children as commodities to be exploited by groups seeking power. The use of children as soldiers continues to be documented in over two dozen nations according to NGOs and organizations like UNICEF.

A January 2012 report by Human Rights Watch, for example, details the use of children in Mali. According to observers, “…several were only 12 or 13 years old, all armed with big guns…” An April 2011 discussion about a WikiLeaks document by Spiegel Online notes that several inmates at the Guantanamo camp “were minors.” Spiegel profiled Omar Kadhr, a Canadian citizen of Egyptian descent who was 15 when captured in Afghanistan as a “child soldier.”

The UN Convention on the Rights of the Child (1989) contains many protocols governing every aspect of children under the age of eighteen, including their use in military conflicts. Most member nations signed the Convention, although the United States’ Senate never ratified it. Despite such global efforts, however, children continue to be recruited and trained at very young ages in a practice woven deep in the history of many cultures – the exploitation of society’s weakest and most vulnerable members.