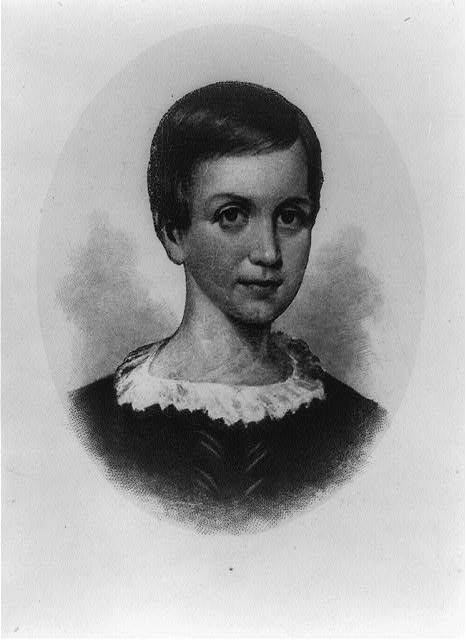 Portrait of Emily Dickinson in her youth. Image courtesy of the Library of Congress.

The complex beginnings from which modern feminist poetry emerged has generated a long struggle for women poets.

As early as the 17th century, Anne Bradstreet remarked: “I am obnoxious to each carping tongue / That says my hand a needle better fits…” – this statement is a precursor to many similar observations.

Despite the achievements of poets like Elizabeth Barrett Browning, Emily Dickinson and Christina Rossetti, cultural ideology stifled Victorian women poets. These female poets were vulnerable to male critics and readers who declared that femininity and poetry were diametrically opposed, since the gender of women poets could not fail to subvert their work. This incompatibility was due to alleged superficiality and triviality.

Acclaimed poet Theodore Roethke was highly specific in his accusations towards female poets, and these are some of his charges: “…lack of range in subject matter, in emotional tone – and lack of a sense of humour… the embroidering of trivial themes; a concern with the mere surfaces of life… hiding from the real agonies of the spirit… stamping a tiny foot against God… caterwauling…”

Women poets who wrote traditionally, in a way that expressed femininity and humility, (for example, Felicia Hemans who wrote “The Stately Homes of England” and “The Boy Stood on the Burning Deck”) were not opposed with such severity, although their male reviewers patronised them.

Emily Dickinson, on the other hand, received much negative criticism; one suggestion was that her mother was not sufficiently warm and affectionate, otherwise Dickinson would have pursued “normal” feminine interests. “She would then have become a church member, been active in community affairs, married and had children,” says John Cody, in After Great Pain: The Inner Life of Emily Dickinson

Be a Homemaker and Forget about Homer

These critics were saying that if the woman poet was fulfilled in the traditional role of homemaker and wife, there would be no need to seek expression in poetry. The stark reality was that the female homemaker received neither basic freedom nor emotional support. She was likely to be too busy ministering to her relatives to find time and inspiration to indulge her art.

One of the difficulties for women was the requirement for poetry to draw upon the classical literature of Greek and Latin subjects that were an integral part of masculine education. The patriarchal society mocked or ignored the female poets who aspired to such learning, and devalued their efforts.

In her book, The Double Bind of the Woman Poet, Suzanne Juhasz described the “double bind” for women poets, that of being mocked for studying Homer, or held in contempt for not being allowed to study Homer.

This difficulty, however, was not confined to women. Cora Kaplan, the Marxist-feminist, points out in her essay “Language and Gender” from her book Literature in the Modern World, that the rupture between childhood and adolescence, where public speech is restricted in certain groups of society, has resulted in high language becoming a crucial part of the power of dominant groups.

She refers not only to the victimisation of women, but to issues of class, race and status. It is from this unwieldy foundation that our current female poets have striven to find a voice.

One of the aims of the feminists during the 1960s was to challenge the accepted concepts of masculinity and femininity and to eradicate the cultural disadvantages suffered by women. They asked why the traditional tendency of the male poet in pursuing the abstract was more highly regarded than the more personal, emotional approach preferred by women poets, and which suited their psychological inclinations.

These women argued that, to favour the idea that elevating the feminine tradition of personal and emotional discourse, would be to accept that women were incapable of a more masculine and formalised writing, and therefore to devalue them as poets. This was a dilemma for the feminists, perceived as a choice between competition or diversification.

Competition would focus on using language in the masculine tradition of formal, abstract thought which draws principle from details, is detached, objective and traditionally considered of higher status.

The issue for the feminist supporters of competition was to avoid charges of feebleness and lack of logic, to be coherent and to justify feminine aims. Sylvia Plath provided an example of a highly-competitive voice, although she was not a feminist. For Plath, competitiveness was extended to women as well as men.

Many women, however, opposed competition. The main obstacles with adopting the masculine approach were that competing might also suggest some dissembling and that it might lead to a further oppression, that of fitting in and pandering to the requirements of the other.

Diversification, on the other hand, would mean the establishment of a feminine language, which was more personal and more emotional and did not separate critical from creative writing, as demonstrated by the writing of Virginia Woolf, whose style remained consistent, regardless of its creative or critical purpose.

As a result of this dilemma, Jan Montefiore notes that there was a strong belief in the necessity for “[A]n alternative woman’s tradition [which] would enable feminists to rewrite our independent history… construct a context of poetic meaning… make a woman’s discourse thinkable.”

Women Should Explore Their Inventiveness

To this end, feminist thinkers such as Helene Cixous developed a theory described as écriture feminine. Cixous’ belief is as follows: “Woman must put herself into the text – as into the world and into history – by her own movement.” Cixous continues in her essay “The Laugh of the Medusa” in Literature in the Modern World by describing the richness of women’s imaginations, especially with reference to their eroticism.

She entreated women to write and to allow no one to prevent them from exploring their inventiveness.