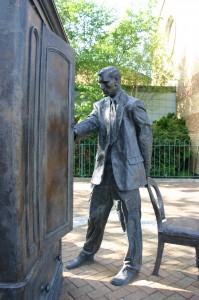 C.S. Lewis, author of seven children’s books, and several scholarly and theological essays, is being honored with one of the today’s best privileges – his body is being moved to “The Poets” corner, home to Shakespeare and Dickens, among other authors. Image by Genvessel.

What does it take to become a literary great? One that is revered for all time? Does it require countless awards and recognition during the author’s lifetime? Or can an author achieve this ‘greatness’ long after death? Fifty years after his death, C.S. Lewis, the much loved author of “The Narnia” books, is finally getting his due, or so it seems. C.S. Lewis will be taking his place in the ‘Poet’s Corner’ of Westminster Abbey.

For centuries, the South Transept of Westminster Abbey has been fondly dubbed, “The Poet’s Corner.’ The first person of literary merit to be interred there was Geoffrey Chaucer (c1343-1400), author of The Canterbury Tales (late 1300s) and fondly regarded as the Father of English literature. His burial at Westminster was probably more due to the fact that he worked as a clerk for the Palace of Westminster. He was later recognized for his literary genius and the Latin scholar and antiquarian, Nicholas Brigham (d.1558), had a magnificent tomb erected for Chaucer in 1556 and had Chaucer remains transferred to this tomb. The English poet, Edmund Spencer (c1552-1599), was buried there and a tradition started.

Poets, playwrights and literary geniuses were interred and/or commemorated in the South Transept over the next centuries. Along with Chaucer and Spencer, Shakespeare, Milton, Dryden and Dickens are also buried or commemorated here. It is a visual library of literary greats of the English language, a memorial of all who have written great works. It is considered a high honour to be so remembered in the Poets’ Corner.

You are never too old to set another goal or to dream a new dream, C.S. Lewis’s (1898-1963) words could not be more true, or more poignant a reminder that life continues and we must always strive to a goal or a dream. His most famous and best-loved books are The Chronicles of Narnia, especially the first book, The Lion, the Witch and the Wardrobe. Written between 1949 and 1954, this series of seven children’s fantasy stories has sold over 100 million copies, it has been translated into over 41 languages and it has been adapted multiple times to produce on radio, television, stage or cinema. One cannot grow up without having heard of Narnia.

It is fitting that Lewis has receive accolades such as plaques, statues of Lewis with the Narnia wardrobe (in East Belfast) and murals of Narnia scenes (also in East Belfast). Now he is about to receive the ultimate honour. Fifty years after his death, C.S. Lewis is to be commemorated in the Poets’ Corner alongside the other greats of English literature, including some of his former students. It is more a Literary Corner than a Poets’ Corner and perhaps there is an irony in that, but Lewis would feel honoured nonetheless.