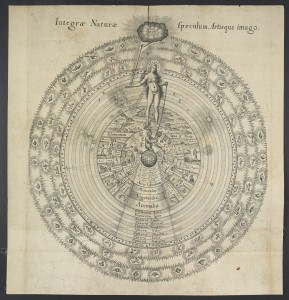 The British Library presents Beautiful Science: Picturing Data, Inspiring Insight. Drawing on one of the world’s finest collections of science-related documents, this is the Library’s first ever science exhibition. Beautiful Science explores the art and science of conveying big data – large amounts of complex information – in a way that is beautiful and visually compelling.

How do we present and interpret huge amounts of information in ways that explain our world? The challenge of presenting data in meaningful ways is not new. Over the centuries ingenious statisticians, historians and scientists have devised ways to disseminate data ranging from simple log books, diagrams and graphs to bar and pie charts, highly complex tables and computer animations.

Exploring the work of statisticians and scientists through three key themes: public health, weather and evolution, Beautiful Science looks at how technological advances and scientific developments lead to visually-exciting ways of interpreting large amounts of information.

Beautiful Science: Highlights of the Exhibition

The oldest item in Beautiful Science is Renaissance alchemist and metaphysician Robert Fludd’s ‘Great Chain of Being’ (1617). The ‘Great Chain of Being’ is an ancient Greek idea classifying all life into a hierarchical order in relation to the rest of the universe. Taking the circle as his starting point, the chain starts with Sophia, goddess of wisdom, and extends downwards to animals, plants and minerals. 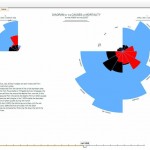 Nightingale’s diagram proved more men died because of poor hospital conditions than from their injuries. Cambridge University’s animation shows the enduring relevance of Nightingale’s data, picturing it in different ways, to different effect. 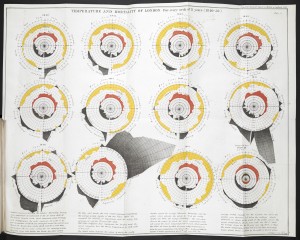 Temperature and Mortality of London. William Farr, Report on the Mortality of Cholera in England, 1848-1849. London, 1852. Image courtesy British Library.

Another striking set of diagrams is William Farr’s Temperature and Mortality of London – Report on the Mortality of Cholera in England, 1848-1849. London, 1852.

Farr, an epidemiologist and statistician, believed cholera occurred because of miasma or ‘bad air,’ and that there was a direct correlation between air temperature and cholera deaths.

To prove his theory he kept meticulous records, plotting details of temperatures and cholera deaths over ten years from 1840. He noted that the circular form of the diagram, and the use of colours, made ‘the diagram represent the facts in a striking manner to the eye.’

Although his theory was wrong, Farr’s legacy is far-reaching and enduring. He called for a data-driven approach to public health, established the first national system for collecting that data, and used innovative and colourful ways to present the facts in a relevant and understandable way.

The exhibition concludes with a contemporary animation by NASA. Using data collected by satellites and monitoring stations, and harnessing the power of supercomputers, the animation shows the movement of ocean surface currents from June 2005 to December 2007. The display demonstrates how ocean circulation develops over time and how this affects world weather.

In an exclusive interview with Decoded Past, Dr. Kieniewicz told us: “…infographics are now incredibly popular, and in a world where we are saturated by increasing amounts of information, turning that data into easily readable pictures is becoming ever more important. But it’s not quite such a new phenomenon as people think! Visualisation has been important to science for a long time – and we were keen to highlight how what is happening now also has its roots in the past. We started from the Library’s collections, but were also really interested in highlighting work by some of cutting edge scientists and designers.”

We asked further how she designed which areas to explore for the exhibition, and Dr. Kieniewicz explained, “We identified public health, weather and climate, and the tree of life as topics where we had great collection items, and went from there.” 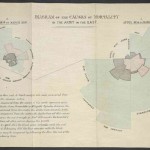 Diagram of the Causes of Mortality in the Army in the East Florence Nightingale. Notes on matters, affecting the health, efficiency and hospital administration of the British Army. London, 1858. Image courtesy of the British Library, used with permission.

With so many important items in the British Library’s science collection how could they choose what to show? We asked about the criteria for including some items and excluding others, and Dr. Kieniewicz explained, “We were keen to highlight diagrams that pictured scientific data in interesting and innovative ways. But it wasn’t just about choosing diagrams that use new techniques – we also wanted to highlight items that told interesting stories. The beauty of many of these objects isn’t just in the aesthetics, but also in the ideas presented, and the ways in which their presentation actually changed the way we think about ourselves or the world.”

Robert Fludd’s Great Chain of Being is the oldest exhibit in the exhibition and has survived for nearly four hundred years. We asked Dr. Kieniewicz how it survived intact for so long and, more importantly, what Fludd is trying to show us. She explained, “The Library has far older stuff actually! Where possible, we do house our materials under climate controlled conditions, and we have a conservation centre, which takes care of some of our older materials – our scientists there can do amazing things. The piece in the exhibition by Robert Fludd is a pictorial representation of an ancient Greek idea – the Great Chain of Being, which presents a hierarchically ordered universe –from God and celestial beings, down to man, animals, plants and the stones beneath our feet. These ideas of organising the universe ultimately laid the groundwork for later classification systems and evolutionary trees in which we now picture our relationship to all life on Earth.”

Decoded Past: My favourite item is Florence Nightingale’s ‘rose diagram.’ Can you tell me more about it?

Dr Kieniewicz: “Most of us are acquainted with Florence Nightingale, the nurse, the ‘Lady with the Lamp.’ But she was also an eminent statistician, and in fact the first female member of the Royal Statistical Society! She used this diagram to demonstrate that far more soldiers were dying during the Crimean War due to poor hospital conditions than were dying due to wounds inflicted on the Battlefield. She was aware of the power that turning data into meaningful images would have and thus used this diagram to convince the government to drive through important sanitary reforms for hospitals.”

Decoded Past: Do you have a favourite item, and why?

Dr Kieniewicz: “Since we just talked about Florence Nightingale’s ‘rose diagram,’ I will have to choose the Temperature and Mortality of Cholera by William Farr. It’s not one that many people know about—mostly because Farr’s hypothesis that cholera was spread by ‘miasma’ or ‘bad air’ was ultimately incorrect. But it shows how he was developing new techniques for picturing data and shows that he felt as though by visualising the data he might come to the correct conclusion. Ultimately, it was John Snow who got it right, but this shows how science isn’t necessarily easy or straightforward.”

The exhibition is on show at the British Library until 26th May 2014. From Florence Nightingale’s ‘rose diagram’ to the Great Chain of Being, this collection illustrates the beauty and art within science – even when the scientist was wrong.