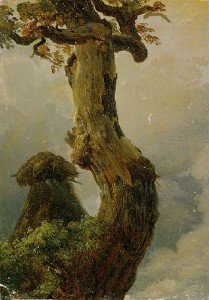 Public installation works frequently inspire commentary and criticism from the general public, but do birds count as art critics? How do installation pieces interact with the natural world? Is the wildlife interaction part of the artistic piece?

In the case of Giuseppe Penone’s latest public installation piece in New York City, one could even say that the artist has “fooled the birds”.

Art in nature is certainly nothing new. Neither is nature as art. The interaction of nature with man and nature with nature is art in itself and of itself. Placing a work of art in a natural environment, whether or not it represents nature, is bound to attract the birds, not to mention other creatures from the natural world.

Nature is a subject that has inspired artists for centuries. We find forests, trees in particular, in paintings depicting natural scenes or anything in the outdoors. Trees also dominate certain images. Even cave paintings depict trees and other natural elements.

Trees are symbolic and metaphoric as well as representational. Tall and elegant, trees are dominant images in nature. Trees protect; trees provide homes for wildlife, protection for prey, for those which seek shelter.

Artists around the world recognize the importance of trees. Canadian artist, Emily Carr (1871-1945), not only realized the significance of trees but also sought to reveal their noble stance and sublime beauty. British artist, John Constable (1776-1837) portrayed the beauty of trees, using the irregular leafy branches to frame a composition in a natural setting. Many other artists, creating images of nature, sought to represent the nobility of the tree.

Trees are not only in art, not only the subject. Trees are also the medium, the medium that portrays the message of its beauty, its resilience, its nobility. The First Nations of the northwest coast of British Columbia recognized all of this and much more, they used trees to create the marvellous totem poles that lined their villages, immortalizing their beliefs, recognizing their families, their ancestry, their heritage.

In London, Ontario, Canada, the grandeur of the tree became not only the medium, but also the permanent representative of its nobility. The ‘forest city’, London, Ontario, saw a resurgence of its once-proud ash trees with this new ‘totem art’ that carved elegance and beauty into stumps of once dead trees. Chainsaw artists, Robbin Wenzoski, Neil Cox, Ted Hayes, Mike Winia, Nancy Wood, Mary-Ann Jack-Bleach and many others worked to create fantasia-images as well as images of wildlife.

Trees and Nature as a Concept

The concept of representing and even using nature as an artistic subject and medium attracts, indeed invites, interaction with the natural world. This can and is part of the artistic concept. The work, when cast outdoors, becomes an interactive piece, as is seen in the giant spider by Franco-American artist Louise Bourgeois which graces the main entrance of the National Gallery of Canada in Ottawa, Canada. People interact with these works, inspiring conversation about the work, both positive and negative. That is what a work of art is supposed to do. Should it not, therefore, also stand to reason that an object set in the outdoors, creates an interaction with wildlife and birdlife and all of nature itself?

Both Bourgeois’s giant spider and Penone’s trees are objects demanding interaction. The works are doing what they are supposed to do, demand attention, conversation, discussion and much more.