The study of shamanism in ancient China is an area of lively debate. There are differing opinions about both what defines a shaman and indeed, whether China had any.

What is a Shaman?

While there is general agreement that shamanism involves spirit possession and the ensuing ecstatic experience, the precise form this took is the subject of ongoing discussion.

The popular definition sees shamanism as a widespread phenomenon, encompassing a wide range of religious practices, and documented in traditional societies as far-flung as Siberia, the Americas, Africa and Australia.

Defined more narrowly, some scholars restrict shamanism to Central Asia and Siberia, where the term was originally coined. The word shaman itself comes from the Siberian Tungus term, and the general consensus is that the word comes from the word sa, meaning ‘to know.’

The far-flung nature of the evidence for shamanism is a key factor when considering the phenomenon in ancient China. Ancient China was a cultural mosaic, with different cultures and languages and peoples periodically moving to new regions and bringing with them their own beliefs and practices. Communication routes ran west along what would become known as the Silk Road, while to the north lay the Steppe Route, from China to Siberia via Mongolia. Both ideas and artefacts travelled back and forth along these routes.

The Shaman and the Supernatural World

The shaman often received his – or her, as shamans could be both male and female – calling after experiencing life-threatening stress or illness. The ability to overcome such experiences by entering into an altered state of consciousness marked out the potential shaman as someone special. This was sometimes reinforced by physically-gruelling initiations. Surviving such initiations meant they had mastered control over powerful supernatural forces.

The tasks of the shaman included rain-making, divination and medicine; tasks that involved a performance element using music and dance. These activities helped the shaman contact the relevant supernatural forces, either calling down the spirits to possess them or themselves ascending to the spirit realm. Archaeologists have found shamanic paraphernalia allied with these activities across China, such as bones, feathers, antlers, rattles, masks and, most notably, the drum.

Mind-altering substances, enabling the shaman to contact the spirits, also played a part. The Shang Dynasty, which lasted from roughly 1500-1050 BC, favoured wine, to judge from the amount of wine vessels found in Shang tombs and the frequent references to wine in the oracle bone inscriptions, which mention at least three types of wine. The shaman offered wine to the ancestors and used the wine to facilitate the correct mental state for communication with the ancestors and the spirits.

The great bronze vessels of the Shang are frequently decorated with depictions of birds and animals, of composite beasts, and of beings transforming from one type to another. Such transformations are key elements of shamanism.

The Archaeological Evidence for Shamanism 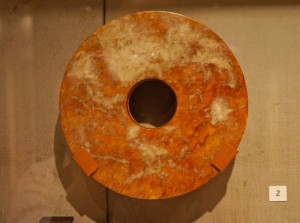 This is a finely-worked jade bi from Liangzhu Culture. Copyright image by Paris Franz, all rights reserved.

Archaeological evidence suggesting shamanic practices in China dates back to the Neolithic. One of the most striking sites is the tomb complex M45 at Xishuipo, Puyang County, in Henan province, which archaeologists excavated in the 1980s.

Dating to about 4000 BC, the tomb’s main burial is of a male, flanked by three other bodies and two large mosaics, one thought to represent a tiger and the other a dragon. The tomb is, according to historian Sarah Milledge Nelson, the earliest archaeological evidence of sky lore in East Asia.

Liangzhu culture, which flourished between 3500 and 2500 BC, has also left intriguing archaeological evidence for shamanism. Centred on the Lake Taihu area, north of Hangzhou Bay, the Liangzhu were particularly known for the sophistication of their jades, especially the mysterious types known as the bi, large disks with central holes, and the cong, a hollow tube that is square on the outside and circular on the inside.

In the absence of written records, it is impossible to say exactly how the shaman used the bi and the cong, but it is clear they were prestige items. It took a lot of resources to procure and work jade.

The cong of the Liangzhu are particularly notable for their decoration, which provides some of the earliest evidence for the emergence of ritual art in China. The images consist of two types of mask, one with human characteristics, the other with animal characteristics. They are often found on the corners of the cong, giving a three-dimensional effect, with the human mask above the animal. Some cong also have a complex, compound image on the central panel depicting a human wearing a large headdress imposed over the animal mask. This compound motif has been found only on jades excavated from the cemeteries of Fanshan and Yaoshan.

Some scholars have suggested that the human and animal motif represents a deity worshipped by the Liangzhu population. The historian Lei Congyun speculates that the plentiful jade objects found in Liangzhu graves formed part of special headgear of the type worn by a shaman. Jade battle axes were also discovered in each of the large graves at Fanshan and Yaoshan, which scholars believe are rods similar to those used by present-day shamans in north-east Asia.

The Shaman in Ancient China Remains an Enigma

Aside from the Shang oracle bone inscriptions, the literary evidence for shamanism dates to the Zhou period (1050 – 771 BC) by which time the shaman had become part of the bureaucracy, hired and dismissed as necessary to deal with events such as drought, death and disease. It is only when we study the magnificent burials of a much earlier time that we get a sense of just how powerful and integral a figure the shaman was.