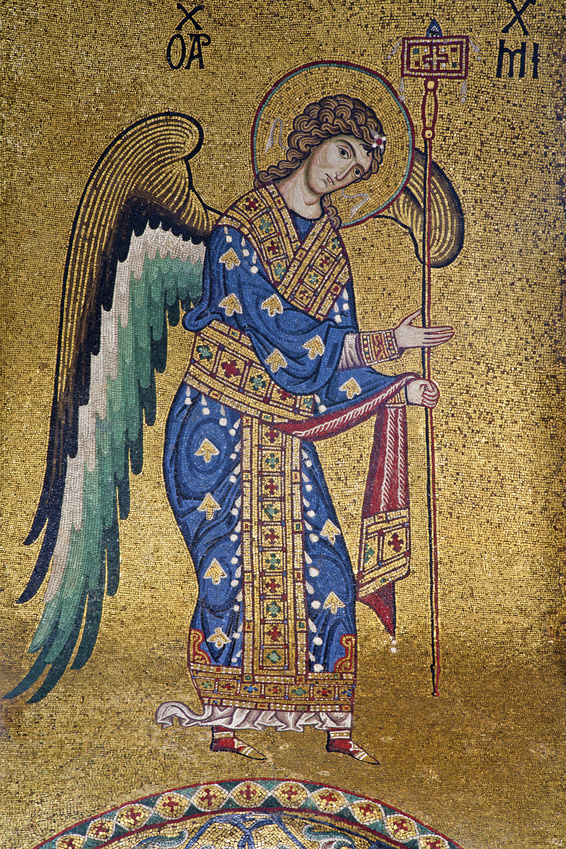 We must begin by stating that the theology of the angel hierarchy developed before the split between the Catholic and Orthodox churches, so it is common to both.

Both churches accept the thinker responsible for angel hierarchy theory; the Pseudo-Dionysius wrote in about 532 under the name of Dionysius the Areopagite, one of Paul’s few converts at Athens in the first century.

Writing under the name of a historic personage was not uncommon at that period, as it conferred legitimacy to one’s ideas.

The religious world at his time was influenced by Neoplatonism, a derivation of Platonism, but which strongly rejected its dualistic tendencies.

Plotinus, a founder of Neoplatonism, was a monist, who believed that there was an ultimate reality that unfolds itself through a hierarchy of lower beings descending in order of wisdom, power and greatness from God downwards through humans to lower beings.

This led religious thinkers to speculate that there were levels of being superior to humans, though Neoplatonism did not specify what they were with any certainty. However, like all forms of Platonism it regarded the spiritual as higher than the material and believed that beings at the higher level were non-material spirits free from the passions  that beset humans and beasts.

Angels belonged to the Jewish intellectual world to which the Christians were heirs. Angels were in the oldest Jewish tales; early reports regarded them as visual manifestations of God. After the exile, when the influence of the Zoroastrian faith of Iran entered Jewish culture, believers considered angels entities subordinate to God, but distinct from him. In the last two centuries of the first millenium bc Jewish speculation on angels really exploded, and there is no clear system to be had in the various sources on the topic of angels.

Hierarchies Above and Below

There was in ancient times a tendency to think that earth in some way imitated heaven, so that just as an earthly ruler had a hierarchical court, so the heavenly ruler had one as well. Thus there came about the belief that there were levels of angelic beings, each of which was superior to the other, who exist to serve the supreme Lord of heaven in the heavenly court and who pass on orders to those below. But what were the identities of these beings? Philosophy could not say. It is also worth noting that the justification for the hierarchical church on earth could be founded in the natural hierarchy of  beings established in heaven.

At this point Scripture enters the story, as Christians believed that it revealed  mysteries that philosophy cannot. Paul, writing in Ephesians 1:21 and Colossians 1:16 speaks of Christ subduing thrones, dominions and powers to put himself as the head of all creatures. What Paul meant by these terms is unclear. They may refer to the powers of this earth,who must all be subject to Christ, but it may also refer to the spiritual powers at loose in the world, beings who do not submit themselves to God.

Although Christians acknowledged the existence of angels, whose existence is attested by Scripture, for many years, they did not place much emphasis on them.

Angels: The Work of Pseudo- Dionysius

Dionysius was a mystic who we know for his advocacy of via negativa, the belief that God transcends all human language. He was also influenced by Neoplatonism, and therefore regarded God as the pinnacle of a hierarchy of being.

This led Dionysius to speculate on the beings that existed in hierarchical order below God; he would feel justified in this because like many of the ancients he believed that the speculative imagination could be used as a tool for exploring reality and he was as confident in its ability to attain truth as his fellows were.

For Dionysius, angels were ordered in three groups of three.

Each one had the strengths of the ones below, but had abilities that the lower ones did not possess. Within each group, there were first, second and third in order, all in the great scale of being. Dionysius spoke at length about the strengths of each of these orders.

Orders of the Angels According to Dionysius

The first rank of angels, according to Dionysius, consists of Seraphim, Cherubim and Thrones. These beings have nothing to with mere mortals but exist to serve God in the heavenly court. Seraphim are mentioned in the book of Isaiah [Isaiah 6] when the prophet has a vision of God in his heavenly court . Cherubim are also mentioned in the Bible, and they are beings of great wisdom rather than the cute little angels of mediaeval art. Thrones are creatures of authority. All these ranks govern the ones below, a kind of heavenly senior management.

Below the first rank come  Dominations, Virtues and Powers. While these angels do not appear among humans, they stand in hierarchical rank above those that do. Virtues are beings whose name suggests that they are adept at all virtuous qualities, while Dominations and Powers are beings of authority.

Finally there is the rank that deals with humans: Principalities, Archangels and Angels. Principalities are at the top, and they rule the archangels, who are responsible for the various nations of the Earth. Michael is responsible for Israel, for example. Angels, the lowest rank, go to humankind with messages; these are mainly those beings mentioned in the Bible. The only archangel that appears to have visited humans is Gabriel.

Since Dionysius there has been no development in thought about the angelic hierarchy, and with the exception of belief in guardian angels, angels have little place in the lives of Christians. That the theology of the hierarchy has not developed is probably due to the fact that it has no practical bearing on the Christian religious life, but is a form of esoteric speculation, alien to most ordinary Christians.