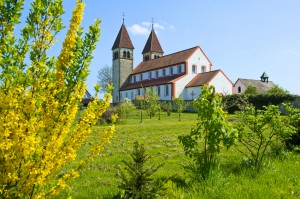 Reichenau now; the monks are gone, but it remains an idyllic place. Image courtesy of Berndt Leitner.

Walafrid Strabo cultivated his tiny garden at Reichenau, an island in Lake Constance, and turned his experiences into a classic of garden writing. In his works, we gain an insight into the practice of mediaeval religious gardening. In Strabo’s book, Hortulus, we can take a peep into a monastic garden of the Middle Ages.

Lake Constance enjoys a benign micro-climate, (apparently, today it is warm enough for bananas to grow there) and in the lake there is the fertile isle of Reichenau, even today famed for its vegetable growing. For many years, there was a monastery on this isle famed for one particular monk, the writer Walafrid Strabo (808-849 A.D.)

Walafrid, whose squint got him the nickname Strabo (Squinter), was for a few years abbot of this small monastery, where he indulged his passion for gardening, creating a little Eden in the balmy climate of Lake Constance.

By Strabo’s time, most European monasteries were Benedictine, and all had gardens. In the larger monasteries there were several. All would have a physic garden to provide the infirmarian, the Cadfael of the day, with healing herbs.

There was generally a vegetable garden, and often a paradise, a garden around the abbey church where monks could walk and meditate and from which the monks picked flowers for the altar.

Strabo’s garden was an abbot’s garden, a special place for the abbot to relax and meet important visitors. Most abbots had their gardens tended by monks, but Strabo tended his own, because he loved it. In fact he loved it so much that he wrote an extended poem about it, the Hortulus, a term which means little garden.

Having studied there he moved away for a while to study under the scholar Rabanus Maurus and thence he went to the court of Charles the Bald as an advisor, returning to Reichenau to become its abbot.

With the exception of four years of exile for taking the wrong side in a political dispute, he was to spend the rest of his life at the island abbey until his premature death fording a swollen river while on abbey business.

Shown is a selection of a poem by Abott Strabo and a depiction of the beautiful climate of Lake Constance. Garden image courtesy of William Ihlen, composite image by Decoded Past, all rights reserved.

Paradise is a word that means garden. The rationale of a monastery is serve as paradise on Earth, and its gardens should be shoots out of Eden, the re-creation of the original garden home of humankind.

But the monks believed that Eden was not a place for idle relaxation, a kind of twentieth century version of hippie heaven, for, from the beginning, humans were to till and tend the Earth. Strabo therefore believed that gardening was a moral process, and that in it the application of virtue produced its natural rewards.

Thus when the abbot was not spiritually counselling his monks, performing religious services or dealing with abbey business, others saw him carting buckets from the lake, spreading dung, maintaining the raised beds and weeding the nettles that annoyed him.

But nettles are a good sign, for they grow only in rich soil, and they seemed to love Strabo’s soil. Of course, they lose their sting when boiled and are very nourishing, so when Strabo had been weeding the monks probably got nettles in their soup.

I have eaten young nettle leaves in stew and find them tasty. At that period, people were less fussy about eating weeds than they are now, and as several weeds are nourishing (chickweed, for example) they ate them as well.

Moreover, the Christian ideal of a garden is that it be beautiful and useful. The use is fourfold: food, healing herbs, flowers for the altar and a place for people to rest and relax. The beneficiaries of Christian gardening should be threefold: the gardener, other humans, and God, for whose love and glory the garden is made and maintained. 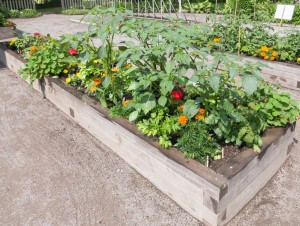 Strabo had raised beds like these. Image courtesy of Alisonhancock.

The Horticultural Abbot and His Plants

The horticultural abbot was keen that his plants be as useful to others as growing them was fun for him. He cultivated over 20 plants of different kinds.

For food there were leeks, which make for Winter and Spring crops, radishes, cucumbers and melons. I doubt whether he dedicated a bed to radishes, as they are a quick crop, oft-grown in beds after they being cleared of other vegetables.

It is noteworthy that he grew lovage, a herb that is finished before other herbs, such as salvia, and so the radishes might have fit into the empty lovage bed.

In Strabo’s small plot there was little room for the bulk vegetables that the abbey needed, many of which would have been grown in the fields, but gardeners can grow herbs in small quantities for great effect.

Fennel, betony, mint and rue were all found in Strabo’s garden. Some of these had medicinal purposes, and it is noteworthy that Strabo lists medicinal functions for most of his plants.

Fennel was a herb highly treasured by German healers, and salvia (sage) has always had a healing function. There was a physic garden at Reichenau, but it seems that Strabo supplemented it for the sheer joy of gardening.

He grew roses as well, which he could cut and use to decorate the altar during mass.

Yet artemisia was also found in the hortulus, and this had another use. In the days before brewers used hops, they flavoured beer with several bitter herbs. One was Artemisia, which the Anglo-Saxons called Mugwort, the plant that flavours the mugs. Strabo also grew yarrow. The monk needed only small quantities of this plant to give beer its flavour.

Horehound (Marrubium vulgare) had its place. While used in an American non-alcoholic ale these days, mediaeval Europeans flavoured the alcoholic variety with it so it is likely that Strabo was providing the monastery brewers with their bitter herbs.

It seems that the Hortulus was to some degree a brewer’s garden. Don’t be shocked- beer and ale were great favourites of mediaeval monks. Teetotalism is more of a Protestant practice than a Catholic one.

The Legacy of a Scholar-Gardener

The monastery declined through the Middle Ages and Napoleon finally shut it down. But the memory of its most famous son lives on. Strabo comes over as a pleasant, likable character and never seems to have harmed anyone. A gentle scholar-gardener who died young, he has left a good and enduring memory.

People sometimes overlook the beer-making function of the Hortulus, but I like to think of the abbot nurturing the monks’ spirits in more ways than one. It is a pleasant way to be remembered.