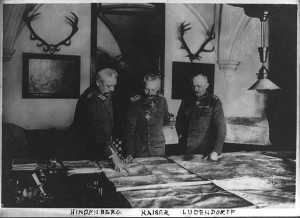 Kaiser Wilhelm II of Germany, demonized in America, is shown here flanked by generals Paul von Hindenburg (left) and Erich Ludendorff (right). This picture dates to 1917. Image courtesy of the US Library of Congress.

“He has refused his assent to laws, the most wholesome and necessary for the public good.”

So begins the list of grievances against England’s King George III, enumerated by Thomas Jefferson in one of America’s greatest documents, The Declaration of Independence. King George was a perfect enemy: his dominion over the American colonies was portrayed as arbitrary and unjust. In short, he was a tyrant.

In contrast, although George III was still Britain’s king when the War of 1812 broke out, Americans were heavily divided over that war and there was no clearly stated enemy. Even the 1814 burning of Washington City, the nation’s new capital, did more to antagonize sectional issues, such as trade with Britain, than unite the people against a common enemy.

After Pearl Harbor in December 1941, Nazi and militarist Japanese leaders were pilloried in every available media, including cartoons and popular songs.

In many cases the assignation of enemy was well justified. In some cases, however, enemies were created in order to elicit national responses. More than 110,000 Japanese Americans were placed in internment or concentration camps. Events like the Bataan Death March, kept from the public for several years, helped fuel a unity that in 1945 justified the dropping of two atomic bombs on Japanese cities.

The best enemies are the most ruthless, or at least those portrayed as such. During the Mexican-American War in 1846, Santa Anna reemerged as an arch-villain. Americans recalled the butcher of the Alamo and the man who approved the “massacre” of Goliad prisoners during the Texas War of Independence. 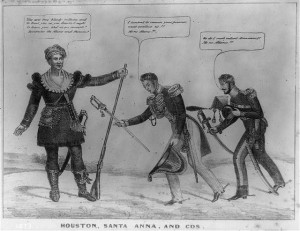 This illustration by Henry R. Pobinson depicts the surrender of Santa Anna to Sam Houston in 1836. Image courtesy of the US Library of Congress.

Few Americans knew, however, that President James Polk had secretly agreed to transport Santa Anna back to Mexico on an American warship from Cuba to Veracruz. The costs, including a stipend or bribe, were hidden in an appropriations bill. After Santa Anna regained power, he refused to make peace and sell Polk what would later be called the Mexican Cession.

At the close of the nineteenth century, the McKinley administration went to war with Spain. New enemies were created, including men like Emilio Aguinaldo, a Filipino leader who supported American efforts to defeat the forces of imperialist Spain. But the United States was not interested in liberating the Philippines.

When Aguinaldo resisted, he became an enemy. Tens of thousands of Filipinos died during the Philippine War, including women and children. The war introduced water-boarding as a torture method used by both sides of the conflict.

Ideology as an Enemy

The post-World War II enemy was an ideology, characterized through many faces. Americans were taught that two global spheres of influence existed, competing for the hearts and minds of nations emerging out of colonialism: communism threatened democracy. American politicians from both major political parties sought to demonstrate that they were the strongest on communism, treating every international incident as if it were the onset of a nuclear showdown.

Communism, as associated with the USSR or Soviet Russia, deteriorated at the end of the twentieth century. Although the United States was the only “superpower” left, new forces rapidly filled the need for enemies. After the 9/11 tragedy, Osama bin Laden became America’s most hunted man – the enemy was no longer faceless and purely ideological. With the invasion of Iraq, Saddam Hussein became a high profile enemy, a monster who used poison gas on his own people.

Post-modern enemies include the new leader of North Korea, Kim Jong-un as well as Bashar al-Assad of Syria who, like Iraq’s Hussein, is alleged to have used chemical weapons against his own people, crossing President Obama’s “line.” Yet neither Kim Jong-un nor Assad fit the mold of an enemy able to unify Americans. 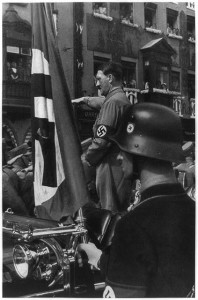 Adolf Hitler is considered one of the most brutal dictators of recent history. As leader of Nazi Germany, he became the epitome of what an enemy of freedom characterizes. Subsequent dictators, like Saddam Hussein, were often compared with Hitler. Image courtesy of the US Library of Congress.

We Have Met the Enemy and He Is Us

The frequently cited Pogo quote, “we have met the enemy and he is us,” originally referred to Earth Day in 1970 but is often used by commentators to reflect a variety of social and political concerns and issues. Americans today are polarized by views on continued racism and social issues like same-sex marriage.

In the absence of a unifying enemy, political extremes generate old demons wearing new faces. The George Zimmerman trial, recently concluded in Florida, may be the most cogent example, noted by non-American media weeks before the trial concluded. According to a Spiegel commentary by Marc Pitzke, “… the United States is still grappling with the problem of racism, with discrimination and with the long-term consequences of past slavery in the country” (“Why the US Still Needs Race Protection Laws,” June 26, 2013).

Immediately after the 1941 Pearl Harbor attack, Japan’s Admiral Isoroku Yamamoto supposedly commented that the attack had awakened a “sleeping giant.” Whether he actually spoke the words attributed to him doesn’t alter the sentiment clearly observable: Pearl Harbor effectively ended the isolationist movement and brought a nation together. It was that resolve, seen from the founding of the nation, that redefined what American freedom meant in a society reflecting many ethnicities and personal beliefs.

The oath required of all new American citizens contains the promise to, “defend the Constitution and laws of the United States of America against all enemies, foreign and domestic…” It is a reminder that throughout American history, enemies have brought the nation together.

Bradley, James. The Imperial Cruise: A Secret History of Empire and War. (2010). New York: Back Bay Books/Little, Brown and Company.